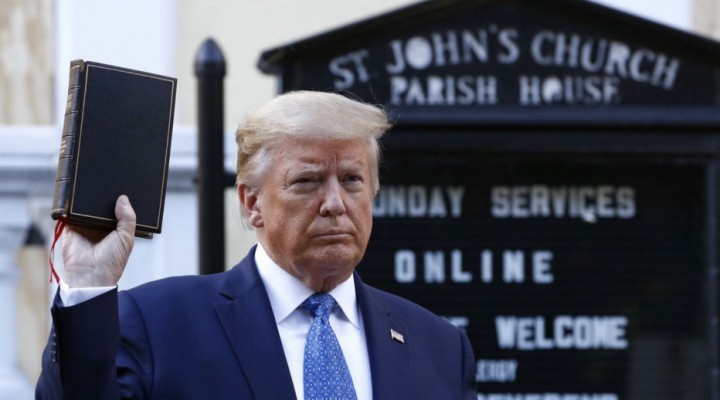 Barack Obama has given his perfunctory speech about the Black Lives Matter protests taking place in America today, and it was every bit as full of pretty words and empty of actual substance as you’d expect from a president who spent eight years stagnating the progressive movement with empty hope narrative while advancing the same murderous oppressive agendas as his predecessors.

The former president talked about changes that need to be made as though he wasn’t the most powerful politician in America for two full terms, praised the nation’s police officers saying “the vast majority” of them protect and serve the people, and encouraged them to continue making empty gestures of solidarity with the protesters to calm them down.

“I want to acknowledge the folks in law enforcement that share the goals of re-imagining policing,” Obama said. “Because there are folks out there who took their oath to serve your communities to your countries [who] have a tough job, and I know you’re just as outraged about the tragedies in the recent weeks as are many of the protesters. So we’re grateful for the vast majority of you who protect and serve. I’ve been heartened to see those in law enforcement who recognize, ‘Let me march along with these protestors. Let me stand side by side and recognize that I want to be part of the solution,’ and have shown restraint and volunteered and engaged and listened because you’re a vital part of the conversation, and change is going to require everyone’s participation.”

George W Bush also weighed in on the protests, with the “compassionate conservative” who murdered a million Iraqis sending liberals throughout the Twitterverse into fits of ecstasy with his emotional plea for “empathy, and shared commitment, and bold action, and a peace rooted in justice.”

You do not, under any circumstances, gotta hand it to George W. Bush

Establishment narrative managers on both sides of America’s imaginary partisan divide have been saturating the mass media with gushing praise for the two former presidents and their wonderful words of healing and unity, and indeed, the words are quite nice. They will change exactly nothing, but they sound nice.

And that is exactly what a US president’s real job is. Not to end police brutality and systemic racism, not to make changes which benefit the American people, and certainly not to make the world a less violent and murderous place, but to say pretty words which lull the public into a pleasant propaganda-induced coma while the sociopathic oligarchs who really run things rob them blind.

And that, right there, is the one and only reason why certain elements of the establishment do not like President Trump.

President Obama: "I want to acknowledge the folks in law enforcement that share the goals of reimagining policing." pic.twitter.com/al3Jt5l6N3

Whenever I point out the many, many evil establishment agendas that have been advanced by the current US president, I always get Trump supporters asking me “Well if he’s serving the establishment, how come establishment media and politicians attack him so hysterically, huh?”

This is why. At first glance it might seem strange to see Democrats and their aligned media shrieking about Trump with such an unprecedented degree of vitriol, but they aren’t doing this because Trump resists the establishment in any meaningful way on domestic or foreign policy; he provides no significant resistance to toxic establishment agendas at all. The reason there’s been such shrill, hysterical rhetoric about this president from establishment narrative managers is because unlike his predecessors, Trump puts an ugly face on the empire.

People who have dedicated their lives to advancing the interests of the oligarchic empire see Trump as an incompetent manager whose oafish, ham-fisted approach to his role risks drawing attention to the evil things the empire does. The US police force, for example, hasn’t gotten any more brutal or racist since Trump has been in office, he just hasn’t been able to manage events and narratives competently to keep the peasants from waking up and revolting.

Thanks for reading! The best way to get around the internet censors and make sure you see the stuff I publish is to subscribe to the mailing list for my website, which will get you an email notification for everything I publish. My work is entirely reader-supported, so if you enjoyed this piece please consider sharing it around, liking me on Facebook, following my antics onTwitter, checking out my podcast on either Youtube, soundcloud,Apple podcasts or Spotify, following me on Steemit, throwing some money into my tip jar on Patreon or Paypal,