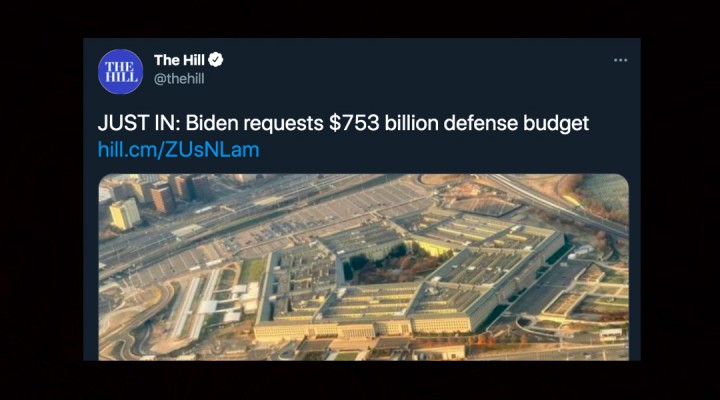 Last year Senator Bernie Sanders led a public push to reduce the insanely bloated US military budget by a paltry ten percent. His push splatted headfirst against a bipartisan solid steel wall which shut him down definitively.

Sanders’ bill was killed in the Senate by a vote of 23 to 77, with half of Senate Democrats stepping up to help Republicans stomp it dead. It’s companion bill in the House of Representatives was killed by a margin of 93 to 324, with a majority of House Democrats (92 to 139) voting nay.

Contrast those numbers with those who voted to approve Trump’s $741 billion military budget this past December. The House voted to approve the National Defense Authorization Act (NDAA) budget by a margin of 335 to 78, 195 of those yes votes coming from the Democratic side of the aisle. The Senate passed that same budget by 84 to 13. This was a substantial increase from the previous year’s budget, a trend which has remained unbroken for years.

And those are just the official numbers going directly to the official “defense” budget. As a Nation article titled “America’s Defense Budget Is Bigger Than You Think” explained in 2019, once you add up the full costs of US wars, preparations for wars, and the impact of those wars, the annual budget is actually already well in excess of a trillion dollars.

And now, under the “harm reduction” candidate Joe Biden, it’s about to get even bigger.

“President Biden is requesting a $753 billion defense budget for next fiscal year, with $715 billion of that going to the Pentagon,” reads a new report from The Hill, which notes that the White House said the Defense Department budget “prioritizes the need to counter the threat from China as the department’s top challenge.”

The Public Citizen advocacy group has criticized the move in a statement, saying “The Pentagon budget — which jumped more than $130 billion during the Trump presidency — is replete with spending on overpriced weapons that don’t work, rip-off deals for private contractors, gigantic investments in pointless or outdated weapons systems, and waste and mismanagement so severe the agency cannot pass an audit. It is, indeed, a tribute to the power of the military-industrial complex.”

“There are hundreds of billions of dollars to be saved by appropriate cuts to the Pentagon budget,” Public Citizen adds. “What is most important for the FY22 budget is that it be smaller than FY21, in order to signal that we are finally moving in the right direction and shifting resources from the Pentagon to investments in people.”

We may be absolutely certain that the Biden administration will get the spending increase it seeks, because that’s how it always works. When there’s a push for a ten percent reduction to a military budget which already exceeds that of the next ten countries combined, the move is dismissed as crazy and extremist. Whenever there’s a push to increase that obscene military budget, it’s “Why yes Mister President, anything you wish Mister President, we’ve got the papers all drawn up already for you Mister President.” It slides right in with no inertia whatsoever, like it’s been lubricated with Astroglide.

The plutocratic media exist to normalize the inexcusable act of robbing from the citizenry to murder people overseas in unceasing acts of military interventionism to benefit war profiteers and secure unipolar planetary hegemony, to make it seem like this is not such a big deal and mollify the public’s righteous indignation at this atrocity. But it is a big deal. It’s a very, very big deal.

We cannot progress to a healthy world as long as we’re being successfully propagandized into accepting endless slaughter and theft as normal and acceptable. We continue to allow ourselves to be led by murderous psychopaths at our own peril.

Alex Rubinstein On The ‘Woke Imperialism’ Of The Biden Administration

0 thoughts on “Reducing US Military Spending Always Meets With Resistance; Increasing It Never Does”