HOME / WORLD / In politicizing intelligence, America is blaming everyone but itself for its self-inflicted woes 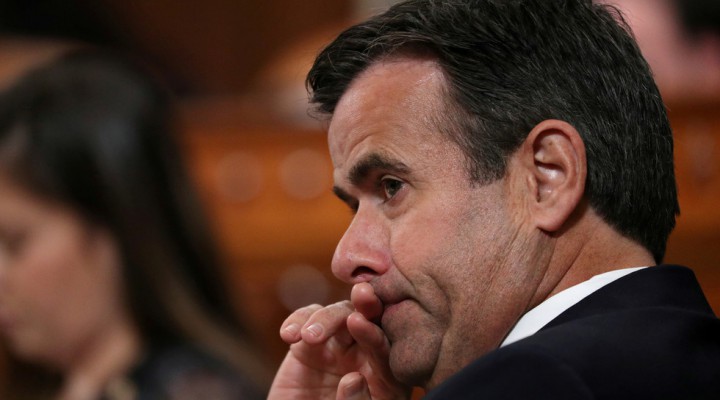 In the latest episode in the US’ single-minded crusade toward self-destruction, Russia and Iran are being fingered for election interference based on intelligence that doesn’t pass the smell test.

You would be justified in thinking that the various news conferences put on by US law enforcement and intelligence officials in which foreign actors – Russia, China and Iran are the usual suspects – are accused of meddling in all things American are little more than a giant practical joke, a parody of how a government should behave, instead of the damning indictment of reality that they are.

Normally, the citation of such coincidences would relegate any subsequent analysis to the rabbit hole of conspiracy theory. However, we do not live in normal times. The press conference was convened by the Director of National Intelligence, John Ratcliffe, who was in turn accompanied by the Director of the FBI, Christopher Wray.

Ratcliffe has come under fire from Congressional Democrats for his selective declassification of documents pertaining to allegations of Russian involvement in the 2016 US presidential campaign. Former CIA director John Brennan, who was the subject of some of the leaked documents, accused Ratcliffe of releasing them to “advance the political interests” of President Donald Trump ahead of the November 3 election.

The declassification caper was followed by Ratcliffe’s unsolicited intervention regarding the acquisition by the FBI of computer hard drives allegedly belonging to Joe Biden’s son, Hunter. Ratcliffe declared that the contents of the drives were not part of a Russian disinformation campaign and thereby drew the ire of Democrats, who view the sordid computer story as a smear campaign against the former vice president.

The October 21 press conference followed in the path of Ratcliffe’s prior interventions, and appeared to be little more than an insufficiently sourced allegation wrapped in highly politicized conclusions. Ratcliffe claimed the US intelligence community had “confirmed that some voter registration information has been obtained by Iran, and separately, by Russia.” This was the gist of the press conference, and it added virtually nothing to the statement released by Ratcliffe in August in which he noted that the US intelligence community was “primarily concerned about the ongoing and potential activity by China, Russia, and Iran.”

What made Ratcliffe’s announcement even less spectacular was the fact that the data he accused Iran and Russia of stealing was publicly available, leading some anonymous intelligence officials to speculate that the hacking operations were little more than an effort to avoid paying the fees associated with accessing this data. As far as crimes go, this one was eminently forgettable.

Ratcliffe noted that the US officials “have already seen Iran sending spoofed emails designed to intimidate voters, incite social unrest, and damage President Trump,” referring to a scheme alleged to have been implemented by Iran, using this information, to disseminate emails to potential voters claiming to be from the controversial Proud Boys organization, that threatened physical violence unless the recipient voted for Trump in the coming election.

The purpose of this scheme appears to be less about actually changing votes (voting is done in secret, so the sender of the letter would have no way of confirming an outcome, thereby negating the threat) and more about undermining confidence in the electoral process as a whole. Both Iran and the Proud Boys have denied any involvement in the letter writing campaign.

This latest incursion by the US intelligence community into the topic of election interference by outside powers has been loudly condemned by the Democrats, with the House Homeland Security Committee, chaired by Mississippi Democrat Bennie Thompson, tweeting “Ratcliffe has TOO OFTEN politicized the Intelligence Community to carry water for the President.”

TO CLARIFY: These election interference operations are clearly not meant to harm President Trump. Americans should listen to FBI Director Wray and CISA Director Krebs. Ratcliffe has TOO OFTEN politicized the Intelligence Community to carry water for the President. https://t.co/vZHI6Z35HU

But Ratcliffe’s actions only continue in the vein of a history of electioneering by the US intelligence community during contentious presidential elections. Much of the Democrats’ current ire against Ratcliffe stems from his exposing documents that point to similar politically motivated interventions by John Brennan and others during the 2016 election, ostensibly for the purpose of undermining the campaign of then-candidate Trump.

The fact is, what passes for domestic US politics is virtually impossible to manipulate by outside agencies. The effort by Cambridge Analytica to predict voting preferences in 2016 by accessing the confidential online data of millions of Americans has been shown to have been spectacularly ineffective, and it exceeded by some way the sophistication and data collection activities attributed to foreign powers such as Russia, China, and Iran.

The mind of the American voter is influenced by a wide variety of inputs that are highly individualized and, in many instances, virtually unquantifiable. The notion that a sophisticated data mining organization such as Cambridge Analytica, or the intelligence services of any of those three nations, could succeed in doing over the course of months what American political organizations have been struggling to achieve over two-plus centuries is not only laughable, but insulting.

Yet the level of domestic political insecurity that exists today is such that both political parties, lacking confidence in their own inherent messaging capability, have succumbed to the psychosis of political victimhood, blaming others for their own inherent failures. By allowing the work of the US intelligence community to be used as a foil in this self-destructive blame game, a succession of US intelligence professionals, led by John Brennan, James Clapper, James Comey, Richard Grenell, John Ratcliffe, and others, have turned the once respected profession of intelligence into a politicized joke.

In this, however, it is in good company, joined by both political parties, the US media and, frankly speaking, the US electorate. American democracy is a mirror image of the nation it purports to serve, and, at the moment, the reflection displayed is a thoroughly tragic one.

0 thoughts on “In politicizing intelligence, America is blaming everyone but itself for its self-inflicted woes”