HOME / SOCIAL/CULTURAL / Kayfabe Populism: Notes From The Edge Of The Narrative Matrix 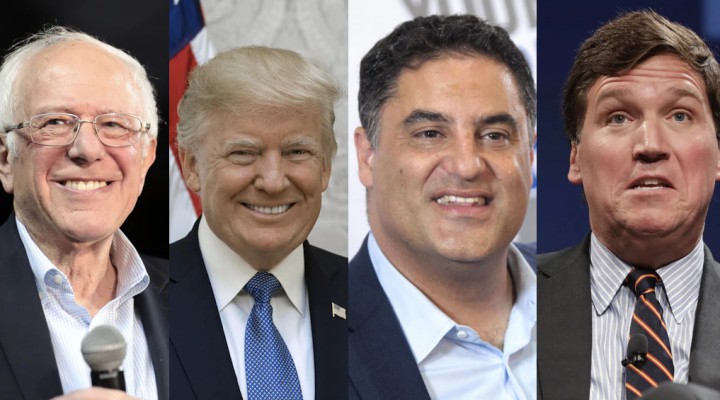 It’s so important that the public have no real say in US politics that the empire not only set up two oligarchic puppet parties which pretend to oppose each other, but also set up fake populist movements within each of those factions which pretend to be fighting the establishment within those parties.

It’s a very clever illusion that sucks up almost all real opposition. If you don’t fall for the first kayfabe conflict and realize the game is rigged for the powerful, you can still end up buying into the fake populist movements set up to oppose them. I fell for them both early on in this commentary gig. But after a while of watching what they do (as opposed to just listening to what they say) and seeing where they actually stand and fight or refuse to fight, you see it’s all an Inception-level fakery. The opposition is controlled, and so is the opposition to the opposition.

It’s like when you dream you’re waking up from a dream but you’re actually in another dream; you awaken from the liberals-vs-conservatives puppet show and then turn to the fake progressive Democrats or the bullshit MAGA camp as a solution, but you’re still asleep.

This all sounds like an awful lot of work to go through until you remember that an entire globe-spanning empire depends on the ability to prevent the American public from either (A) voting in a disruptive government or (B) fighting a revolution. So much power rides on their ability to do this.

Ever since the school shooting in Texas we’ve been watching an entire country learn that it’s not actually cops’ job to save anyone or risk any danger and the only reason they assumed otherwise was because of movies and TV shows.

Idea for an action movie: The Rock needs to rescue his kid from an elementary school where there’s an active shooter, but first he needs to fight his way through an army of cops trying to stop him.

You end mass shootings in America by ceasing to have America serve as the hub of a globe-spanning empire that’s held together by violence and nonstop mass media psyops. It’s not impossible. It’s not even difficult. It’s just not an option anyone in charge would ever consider.

I’m finding myself having less and less patience with people who think the US is an innocent little flower regarding the Ukraine war. It’s like, come on. Grow the fuck up.

Friendly reminder that for a fraction of the cost of funding a world-threatening proxy war against Russia the US could simply have protected Zelensky from the neo-Nazi militias who were threatening to lynch him if he tried to make peace with Russia and prevented this entire war.

The airhead mainstream narrative that Ukrainian forces have been destroying Russian troops and humiliating Putin in epic win after epic win has become unsustainable:

Russian troops are making steady progress in Ukraine’s east. That's sparking fears they could be poised for a bigger breakthrough, and leading to increasingly panicked calls from Kyiv for more powerful weapons https://t.co/TbneLP3ABF

Ukrainian leaders project an image of military invulnerability against #Russia. But commanders offer a more realistic portrait of the war, where outgunned volunteers describe being abandoned by their military brass and facing certain death at the front. https://t.co/YLu9M28Cx8

Another shout out to all you big brave sofa warriors who’ve been screaming that a negotiated peace settlement is unacceptable and helping the US empire throw Ukrainian lives into the gears of a stupid proxy war for US unipolar hegemony while you sit safe at home eating Doritos.

Whenever I try to talk about the risk of the Ukraine war escalating into a nuclear holocaust I get people telling me if that happens it will be Putin’s fault. Like that would make it okay somehow. Like that would somehow validate all the steps our leaders took to get us to that point.

Of all the intensely stupid ways team loyalty and partisanship can express itself, I really don’t think you could come up with one dumber than “Our nuclear brinkmanship isn’t a problem because it’ll be the other side who launches the first nuke” if you tried.

Even pretending it’s certain that Russia would be the one to initiate a nuclear exchange, would that thought actually comfort you when you feel the earth shake? Would you feel any better about the decisions which gave rise to that moment by telling yourself Putin started it? I mean if there’s any time when it doesn’t matter who “started it”, it’s surely when the “Mutual” and “Destruction” part of Mutually Assured Destruction goes into action? I think at that point all our dopey team sports cheering and booing pretty much goes out the window, no?

People who accuse you of having Kremlin loyalties when you question or criticize the US empire are admitting that they don’t care whether statements are true or false, only whether they demonstrate loyalty to our rulers. That’s the lens through which they examine the world, and it’s pure brain poison. How can people think lucid thoughts and engage in lucid discourse about ideas and events when they are continuously measured not by how truthful they are but by what loyalties they appear to demonstrate? They cannot.

1. “That foreign leader my government dislikes is comparable to Adolf Hitler.”

2. “If you object to what my virtuous government has planned for that leader it means you love and support that leader.”

I honestly don’t understand how anyone can stay abreast of the day-to-day depravity of the oligarchic empire without a daily practice geared toward inner peace. Things are so insane and confusing and only getting more so; you’ve got to have a regular discipline to form stability.

Meditation, self-enquiry, healing and energy practices, whatever gets you there, but surely you’ve got to have something before you can stare into the face of the beast continuously without going mad. I can’t imagine looking at this thing every day without any kind of a practice.

0 thoughts on “Kayfabe Populism: Notes From The Edge Of The Narrative Matrix”