HOME / SOCIAL/CULTURAL / How The Question “Who Benefits From This?” Can Change Your Life

How The Question “Who Benefits From This?” Can Change Your Life 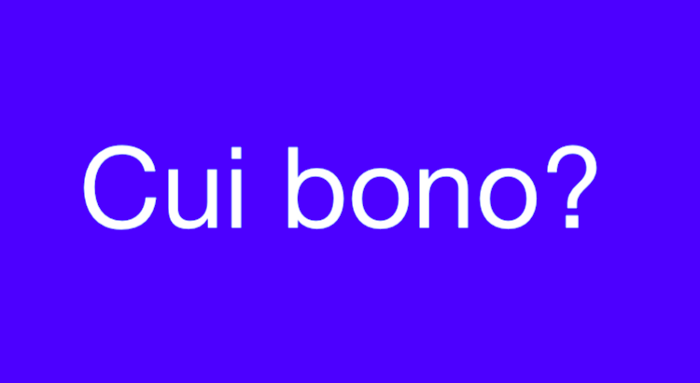 “Cui bono?” is a phrase you’ll often see used on conspiracy-minded Youtube videos and discussion forums. It’s Latin for “Who benefits?”, and it refers to a perspective in legal analysis that the one who stands most to gain from a crime is often the perpetrator. It’s the “motive” part of “means, motive and opportunity”.

The term comes up in conspiracy circles a lot because motive is often the biggest plot hole in the official story promoted by the authorized narrative managers of the political/media class about a given event. The alleged Douma chemical attack last year, for example, had no discernible benefit to the Assad government whatsoever, but would have benefitted the cornered Al-Qaeda affiliates in the city by provoking air strikes from the west, so there remains a lot of skepticism from those who don’t automatically believe their government and the plutocratic media when they say that Damascus was responsible. Such skepticism is dismissively branded “conspiracy theory” by the establishment narrative managers, but it is fully justified.

So it’s a useful concept for analyzing world events in a way that punches through the fog of imperial propaganda. But the question “Who benefits from this?” can, and should, be taken much further.

Don’t just ask “Cui bono?” of potential false flag events. Ask it about every belief in your head. Rigorously holding that candle up to the ideas in your own mind will reveal a lot of junk floating around in there that benefit other people, both the powerful and the not-so-powerful.

To pick one of many possible examples, it’s very interesting how many of America’s ostensibly anti-establishment movements encourage their adherents to support one of America’s two mainstream establishment political parties. The so-called “Resistance” and the progressive movement both herd people who might otherwise support actual leftist movements into the oligarchic folds of the Democratic Party, as does even the lesser-evil voting promoted by those closer to the fringe like Noam Chomsky. On the right you’ve got the warmongering corporate whore party of the Republicans being enthusiastically backed by the MAGA crowd, who you’ll routinely see backing garden variety GOP agendas like the Supreme Court nomination of a longtime Bush lackey in the name of fighting the establishment. Closer to the fringe you’ve got the insufferable QAnon cult, who consistently argue that every Trump move from Assange’s arrest to bombing Syria is a brilliant 5-D chess maneuver against the Deep State.

If those in any of these various factions began sincerely asking the question “Who benefits from my believing this?” about the various reasons they hold for espousing their respective political positions, the answer would come back clear as day that of course the ones who benefit are the plutocratic class which owns both mainstream political parties and the opaque government agencies with which that class is aligned. In the flurry of reasons being proffered in favor of supporting a given faction, it’s easy to overlook the fact that some very powerful people are likely to benefit from that support.

All the information going around about what’s going on in the world is like this. News media must be consumed with an acute awareness that there are extremely powerful people who have a vested interest in manipulating the way you think and perceive. It’s just a fact, and if it isn’t at the forefront of your consciousness, your worldview will necessarily be severely malformed. Cultivating a reflexive curiosity about who benefits from a given narrative being promoted nips this in the bud.

But this isn’t just limited to news media. We get tons of stupid ideas in our heads from things like advertising, which obviously benefit no one but the advertisers and their employers. Women in particular are plagued with body image problems from being pummeled from a very early age with corporate psyops designed for precisely that purpose, and as a result we feed billions of dollars into various interests who profit from our belief that we shouldn’t have small tits or wrinkles or body fat.

Religion is another one. There are of course many immensely wealthy and powerful structures today which benefit from adherents to religion, but most of those who’ve benefited from widespread religious indoctrination aren’t even alive anymore. Governments and world religions have historically been inextricably intertwined with and supportive of each other, because religions can be used to manipulate the masses into believing that it’s virtuous to be poor, humble, meek, submissive and obedient, to “render unto Caesar what is Caesar’s”, and to believe it would be generally sinful to use the power of their numbers to kill their rulers and seize their wealth. The answer to “Who benefits from my religious beliefs?”, if you’re Christian, is something along the lines of “All existing Christian churches, all existing political structures built around exploiting Christian beliefs for political leverage, every preacher, pope and bishop who’s ever lived, and every western ruler since Emperor Constantine.”

Many of the beliefs which have been put into our heads for someone else’s benefit don’t profit the powerful at all; many of them have been implanted by our own loved ones. It’s unfortunate, but friends and family members will often have a vested interest in putting beliefs in our heads which don’t benefit us but them. Such beliefs often revolve around keeping us from getting above our station, from feeling too good about ourselves so that we don’t go off and improve our lives instead of staying in the confining circles we were born into. Others can include believing positive things about loved ones who were actually destructive and abusive to us. Some of them are as simple as beliefs about how we are and how we should be that kept us from talking back to our parents, which if left unexamined can create submissive psychological postures in us that can stay with us to the grave. We form a lot of the beliefs we have about ourselves from the feedback we get from other people, so even something said decades ago by a schoolmate who was only interested in keeping us from rising above them in social status can continue to warp our self image.

From ground-level to the highest echelons of power, there are people who have been benefitting from the beliefs in our heads. Only by doing the necessary inner work and asking “Cui bono?” of all the ideas we believe about our world, our society, our community and ourselves can we sift apart the untrue from the true and construct a clear-eyed worldview which benefits no one but ourselves and our fellow man. Someone’s benefitting from the beliefs in our heads, and, very often, it ain’t us.

Rugged Individualism Cannot Save Us. Only Enlightened Collectivism Can.

0 thoughts on “How The Question “Who Benefits From This?” Can Change Your Life”