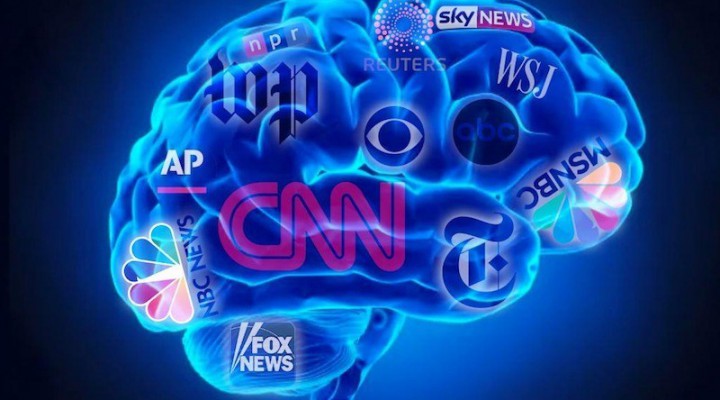 The Grayzone‘s Max Blumenthal has published the first part of an investigative series on how so-called non-governmental organizations (NGOs) are being used to manipulate the narrative about what’s going on in Syria by posing as impartial investigative bodies and circulating pro-imperialist disinformation to the western political/media class as objective fact. Part one is titled “Behind the Syrian Network for Human Rights: How an opposition front group became Western media’s go-to monitor“, and it documents a mountain of evidence that one of these “NGOs” is in fact very much state-funded and highly biased in favor of anti-Assad forces, yet still gets cited as an independent source by western mass media outlets in a way that just so happens to help make the case for western interventionism in Syria.

“Citing the Syrian Network for Human Rights as an independent and credible source is the journalistic equivalent of sourcing statistics on head trauma to a research front created by the National Football League, or turning to tobacco industry lobbyists for information on the connection between smoking and lung cancer. And yet this has been standard practice among correspondents covering the Syrian conflict,” Blumenthal writes. “Indeed, Western press has engaged for years in an insidious sleight of hand, basing reams of shock journalism around claims by a single, highly suspect source that is deeply embedded within the Syrian opposition – and hoped that no one would notice.”

Major media outlets rely on the Syrian Network for Human Rights as a go-to source.

They won’t tell you that @snhr is based in Qatar & run by Syrian opposition leaders who clamor for US intervention.@MaxBlumenthal rips the lid off a propaganda front: https://thegrayzone.com/2019/06/14/syrian-network-for-human-rights-opposition-snhr/ …

Behind the Syrian Network For Human Rights: How an opposition front group became Western media’s…

Top media outlets turn to the Syrian Network for Human Rights (SNHR) for figures on deaths and detentions, never noting the group’s seamless connection to Syria’s opposition, the support it receives…

341 people are talking about this

I’ve taken to calling such things “narrative management operations” lately, because that’s a much clearer illustration of their function than simply labeling them propaganda constructs and psyops (though those labels are certainly accurate as well). Countless operations have been set up both inside and outside of Syria to control the narrative about what’s happening there, and now if a casual observer decides to find out more about the Syrian conflict they’ll almost certainly be consuming information that has been filtered through narrative management ops that have been funded by governments within the US-centralized power alliance.

It’s like trying to figure out what’s going on at the other end of a large room that’s been filled with smoke and mirrors.

As Blumenthal notes, the Syrian government has “been the target of one of the most expensive and sophisticated disinformation campaigns in recent history.” I would call this a charitable understatement. People who think it’s impossible that we’re being lied to about what’s going on in Syria are simply ignorant of, and/or uninterested in, the extensively documented fact that the whole country is encased in a thick veil of high-level, high-budget narrative management operations. They see Fox News, MSNBC, The Guardian, the BBC, the British Foreign Office and the US State Department saying the same things, so they assume it must be true, even though they’re all reporting information that has been filtered through the same narrative management lens.

But narrative management is in no way limited to Syria. You see all sorts of organizations used to manipulate public narratives all the time, like the cybersecurity company Crowdstrike for example, whose highly suspicious analysis of the DNC’s servers formed the foundation of the official Russian hacking narrative, and whose CEO is now a billionaire. Whether it’s longstanding foreign policy agendas like shoving Russia off the world stage, or longstanding domestic agendas like preserving the dominance of the plutocratic class and expanding surveillance and police militarization, our understanding of what’s going on in the world is constantly being messed with.

Narrative is how we form our understanding of the world. It’s the mental stories we tell about ourselves, our surroundings, our community and our world that allow us to orient ourselves in relation to abstract concepts: “My name is Steve.” “I work at Rusty’s over there on Mulberry Street.” “I currently have about a thousand dollars in my checking account.” “That person is my friend.” “That other person is my enemy.” Our entire day-to-day experience of the world is filtered through these mental narratives as we use thought to navigate our way from morning coffee to bedtime.

Narrative dominates our experience of reality and our ability to act within it. You can understand, then, how powerful someone would be if they found a way to control a large portion of it.

Narrative is so powerful that just captioning a picture with a certain story can cause people to see a photograph completely different than they otherwise would. This Daily Mail smear piece on Julian Assange, for example, was published after his arrest and is titled “Assange inside his fetid lair: Revealed, the full squalid horror that drove embassy staff to finally kick him out.” As proof of this “fetid”, “squalid” “horror”, the Daily Mail provided photographs like this one of a clean, normal looking bathroom and this one of the WikiLeaks founder using a dish that is dirty because he’s still using in the photo.

These are obviously photographs of perfectly normal and innocuous things, but the forceful language used combined with human suggestibility saw the article shared by propagandized individuals on social mediawith expressions of shock at what a filthy, disgusting man Assange is, including this Sky News Australia reporter who tweeted the ridiculous article with the caption, “This is why I would rather live alone than have random housemates. Wash your plates, mate.”

They were looking at the same photos you just looked at, but because they were perceiving them through a different narrative filter, they saw something completely different from what you saw.

In the movie The Matrix, the film’s hero is plugged into a digital simulation and asks his guide, “This… this isn’t real?”

“What is real?” the guide replies. “How do you define ‘real’? If you’re talking about what you can feel, what you can smell, what you can taste and see, then ‘real’ is simply electrical signals interpreted by your brain.”

In exactly the same way, what we take to be “real” about world events is information that we have taken into our senses and assessed as true. We’ll often put as much faith in these beliefs as we do in what we’ve seen, heard and touched for ourselves, but understandings of world events are made of narrative, and narrative can be manipulated in the interests of the powerful.

This is the clearest I’ve been able to sum it all up so far.https://medium.com/@caityjohnstone/society-is-made-of-narrative-realizing-this-is-awakening-from-the-matrix-787c7e2539ae …

In the movie The Matrix, humans are imprisoned in a virtual world by a powerful artificial intelligence system in a dystopian future. What…

962 people are talking about this

Those who engage in narrative management are not merely guilty of diddling with a few stories; they are actively controlling people’s experience of reality. As far as human experience is concerned, perception is reality. The most talented manipulators among us are fully aware of this and understand that, by controlling people’s perceptions, they can in a very real way control their reality.

The media-owning plutocratic class and its allies in opaque and unaccountable government agencies are in this way able to control reality, both in the way we experience it in our minds and in the way it expresses concretely. The ability to reach into people’s minds on a mass scale and interfere with their ability to understand what’s happening on their own planet and in their own society is a power so immense it’s hard to appreciate, and so staggeringly creepy it’s hard to comprehend. It’s a violation of a part of us that is so intimate and so sacred it could almost be said to border on the metaphysical.

If we could truly see what grave intercessions into every human’s mental sovereignty these manipulators are getting away with, it would look not unlike the British Empire of old as it slaughtered, stole, raped and enslaved its way across the planet. These same colonialist actions are occurring today, largely from the descendants of these same groups of people, but stories are being fed to us day after day to keep it hidden from us.

The stories don’t just keep us docile and unquestioning, they keep our energy and output enslaved to the story-masters. Just as an example, if people could really see how hard they work compared to how lazy the plutocrats they work for are, they would down tools in a hot second, but we don’t because we get told over and over how you get money if you work hard, so our perception is that the billionaires are the hardest workers of all. There are all these layers of story which prevent us from seeing what’s really going on, and those stories are hammered into our brains by the people who they benefit. Another example is how none of these wars ever benefited a single one of us plebs, but you see plenty of us disseminating, cheerleading and volunteering to help with these barbaric power grabs for the rich because “freedom”, because “democracy”, because “humanitarian”, etc.

Set your intention right now to strip the veils from your eyes and let the world reveal itself as it really is, in all its jarring, horrific ugliness. Only when we’re truly committed to seeing things as they are will we be able to allow the wisdom of our whole guide us back to safety and sanity, and the good news is that it doesn’t have to be every single one of us. Just enough of us seeing and speaking the truth about the Emperor’s new clothes will stir the rest of them from their slumber.

Be the tipping point.