HOME / WORLD / Happy “Independence” Day: Notes From The Edge Of The Narrative Matrix 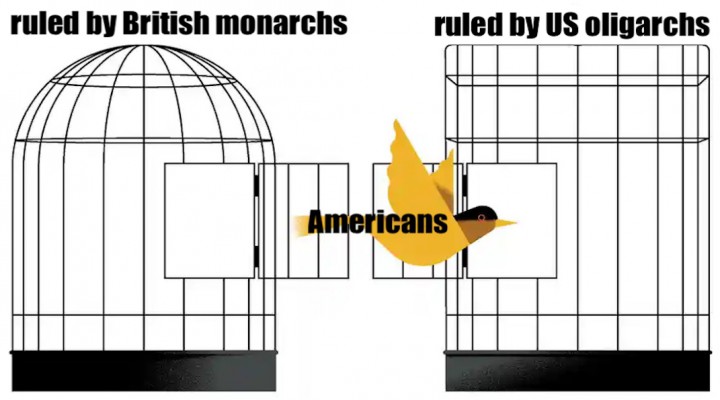 Today America celebrates its hard-fought victory in its fight to free itself from the rule of British monarchs so it could be ruled by US oligarchs.

The fucking ocean caught fire and they just bombed Iraq and Syria and they’re killing kids in Yemen and ramping up nuclear escalations against Russia and China, and Facebook is warning users that it’s those who criticize this system who are the dangerous extremists.

Step 1: Train the public to only accept “reputable sources” like the New York Times, WaPo, CNN etc and to dismiss indie media as Russian propaganda.

Step 2: Make sure the “reputable sources” don’t cover stories that are inconvenient for the powerful, leaving only indie media to report on them.

This new trend of complete mass media blackouts on inconvenient stories is a problem for many reasons, among them the fact that it’s just so hard to fight. How do you deal with all mass media outlets collaborating in unison to black out important stories?

It’s important to understand that the imperial propagandists don’t just tell us what to think; they also train us how to think. Feeding us bad information is only half their job; the other half is shaping the cognitive frameworks by which we form opinions about that information.

This is why the mass media have “opinion” segments as well as “news” segments. They’re not there in case you were curious what Johnny McThinktank’s opinions are on the issue of the day (they know you weren’t), they’re to model the acceptable parameters of thinking on that issue. And the acceptable parameters of thinking will always take it as a given that the mechanisms of oligarchy and empire mustn’t be interrupted or inconvenienced in any way. Differing opinions will be modeled on how those mechanisms should be advanced, but never if they should.

That’s how come the renowned expert PhD pundit will often have a less truth-based worldview than your stoner flatmate with an eighth-grade education. Because they’ve been trained on both what to think and how to think, they’ll pour all their intellect into defending lie-based worldviews.

The most dangerous extremists of our age are not radical jihadists, nor fundamentalist Christians, nor white supremacists, nor communists, nor anarchists, but mainstream adherents to the status quo politics that are murdering people around the world and driving us to armageddon.

This should not be a controversial thing to say. Certainly some of the above groups are dangerous and wrong, but they are objectively far less dangerous and deadly than the mainstream mass murdering ecocidal extremists who people inaccurately label “centrists” and “moderates”.

Sorry for destroying the environment, but in our defense we did everything we possibly could short of inconveniencing ourselves in any way or doing anything we don’t like doing or taking any kind of meaningful action.

American warmongers want to bring democracy to Iran, China, North Korea, Russia, Syria, and, eventually, at the very bottom of the list, perhaps to the United States as well.

Congratulations to all my fellow westerners as we celebrate our 100th anniversary of pretending we are superior to the Communist Party of China.

Westerners have always been far more savage and brutish than any of the populations around the world they’ve ever set out to “civilize”, and that remains the case to this day. Only reason this isn’t clear to us all is our school books were written by westerners.

The US empire’s treatment of Julian Assange has exposed the evil and corruption of the US empire more than Assange himself ever could.

A government whose solution to homelessness is to criminalize the homeless is a government that should not exist.

Western Marxists talking about violent revolution when they can’t get 20 people at a protest are like a little boy talking about fighting supervillains when he can’t even tie his shoes. There won’t be revolution, violent or otherwise, while propaganda rules public consciousness.

Any talk of any kind of revolution is just vapid LARPing as long as people are being successfully propagandized away from rising up, and they are. Your dreams of revolution are so very, very far away right now you might as well be talking about magic. The violent revolution vs peaceful revolution debate on the left is as meaningless as arguing over what company makes the best model of magic wand. No revolution is happening, at all, until the left addresses the problem of mass-scale media psyops first.

Q: What is the populist right?

A: The populist right are Republicans who want to go to war with China instead of Syria.

The US government sponsors the dropping of military explosives on one of the most densely populated areas in the world while waxing self-righteously about human rights. https://t.co/1K7pD7Ff1f

“Why didn’t you leave your abuser sooner?”

If I’d left sooner then that would’ve been when I left, and you’d just be asking me why I didn’t leave sooner than that. Maybe just blame the abuser for abusing.

Ultimately the problem is that mass-scale propaganda institutions are fully unified in their consent-manufacturing narratives while the rest of us are rabidly divided against each other.

People who’ve experienced spiritual enlightenment talk about how they now see how everyone’s stories about life are false. Opening your eyes to what’s going on in our world is very much the same: seeing the propaganda narratives which have nothing to do with what’s true or real.

If you ignored the intense partisan narratives and just dispassionately observed the large-scale behaviors of money, resources and weapons, you’d have no idea the US got a new president in January. But if you listen to the narratives, it’s supposedly a night-and-day difference between this administration and the last one.

Whether you’re talking about personal narratives or mass-scale narratives, they are entirely different from life as it actually is. The babbling stories in our minds are simply ineffective tools for describing reality; the more we get our heads above them, the clearer we can see.

0 thoughts on “Happy “Independence” Day: Notes From The Edge Of The Narrative Matrix”