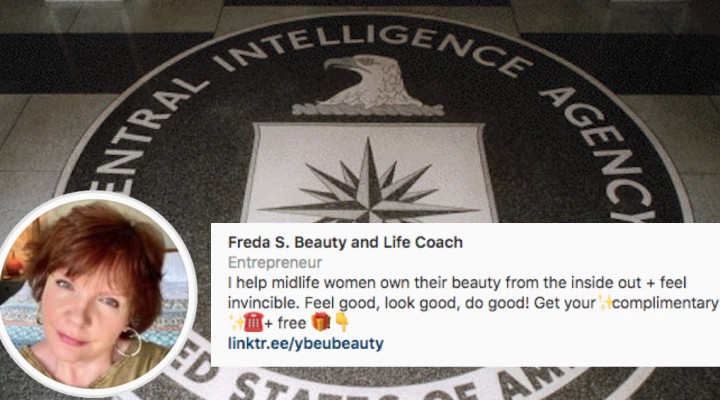 The news man tells me the CIA’s “Queen of Torture” now runs a life and beauty coaching business which helps midlife women “look good, feel good, and do good.”

“HI, I’M FREDA, A CERTIFIED BEAUTY AND LIFE COACH READY TO HELP YOU OWN YOUR BEAUTY FROM THE INSIDE OUT AND FEEL INVINCIBLE IN MIDLIFE,” her website reads in all caps.

And I can only sit here and wonder, twiddling my pockmarked heart in my hands, how one is meant to react to such information?

Does one fall to one’s knees and weep hot tears for her victims, whose screams still haunt soulless fluorescent echoing corridors and whose hurts will never heal?

Does one fall to one’s knees and weep hot tears for our children, whose inheritance is a culture made of wetiko virus and psyops and a world we are clearcutting to make billboards?

Does one fall to one’s knees and weep hot tears for the Indigenous, whose lives we bulldozed and paved over with asphalt just to build a ghostmind civilization where something like this could happen?

Does one shout “Allahu Akbar!” and throw one’s smartphone off the overpass?

Does one take off one’s clothes and shriek like an ape in a last-ditch attempt at restoring the primal clarity?

At bringing things back to before they went wrong, back before CIA torture queens became life and beauty coaches?

Back before CIA torture queens were able to shout from the Reuters rooftops, “I raised my hand loud and proud and you know, I don’t regret it at all”?

Back before Hollywood movies glorifying CIA torture and its queendom began warping our minds and turning our souls into oil?

Back before the sky was scraped by dark towers built on the foundation of an economy that’s held together by lies and cruise missiles?

Back before brainwashed mouth muppets said things like “We can’t be afraid of war with Russia just because Putin has nukes” or “Unregulated speech is bad and dangerous” or “If the CIA was propagandizing us we’d have heard about it in the news”?

Back before we found ourselves sitting here killing time waiting to find out whether humanity dies of climate collapse or nuclear armageddon and whether the inevitable Zelensky movie will star Ryan Reynolds or Channing Tatum?

Back before Silicon Valley Pentagon proxies funneled 21st-century Norman Rockwell paintings into each of our QR-coded skulls?

Back before our dreams had Downvote buttons and our nightmares had laugh tracks?

Before truth was a choked off whisper and bullshit had a Jumbotron?

Before hallucinogens were outlawed and hallucinations were mandatory?

I see you, Queen of Torture, and everything you’ve always been.

Do you think your Instagram ads and Botox siren songs fool me?

I see the eels behind your eyes and the skulls inside your smile; in your heart you are still torturing, and you love it.

We will beat the machine. We will win.

That primal clarity lives within us still, and you can only sedate a giant for so long.

The primal giant will rise, will crush the machine and the CIA black sites, will crack open Gitmo and devour Hollywood, will defecate on the Pentagon and wipe its ass with Langley, and will howl at the moon and banish the narrative matrix to wherever deleted files go.