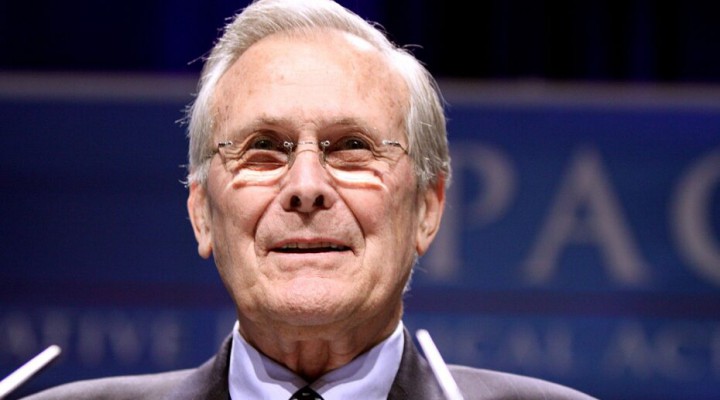 Accolades may continue to pour in for Rumsfeld, but history will continue to judge the ravages of U.S. imperialist violence.

Fellow U.S. war criminals have eulogized the former Defense Secretary Donald Rumsfeld upon news of his death. “A faithful steward of our armed forces,” former U.S. President George W Bush declared. “A period that brought unprecedented challenges to our country and to our military also brought out the best qualities in Secretary Rumsfeld.” Tell that to the tortured, executed and displaced Iraqis tortured upon Rumsfeld’s orders, in line with the “War on Terror” agenda post September 11.

Foreign intervention in the Middle East was high on the U.S. agenda, and a premise was needed for invasion – an invented one would suffice. Cue the alleged evidence of Iraq hoarding weapons of mass destruction to justify an invasion for regime change. The weapons of mass destruction were never discovered, but the claim served its purpose to render Iraq a failed state.

Rumsfeld legacy is mostly tied to his role in the “enhanced interrogation techniques” – the U.S. euphemism for torture – against Iraqi prisoners in Abu Ghraib. Although by no means the only place where detainees were tortured – Guantanamo and Bagram are two other detention centres linked to widespread torture and human rights violations – the media focus on Abu Ghraib’s torture provided an insight into the U.S. government’s penchant for torture, all in the name of democracy.

In December 2002, Rumsfeld had approved a set of interrogation techniques to gain intelligence related to the “Global War on Terrorism”. The indicated torture methods were subject to caveats which, of course, were not included to observe but rather to generate impunity for the perpetrators and the officials authorizing the human rights violations. Of waterboarding, a document dated November 27, 2002 states, “The use of a wet towel to induce the misperception of suffocation would also be permissible if not done with the specific intent to cause prolonged mental harm, and absent medical advice that it would.”

In 2004, it became public knowledge that Rumsfeld himself had approved the use of torture against detainees. As global outrage ensued, former President Bush sought to isolate the perpetrators from the decision-makers, thus ensuring impunity for the political war mongers. So involved was Rumsfeld in authorizing torture against detainees, that the former U.S. Army Brigadier General Janis Karpinski who ran Abu Ghraib until early 2004, recalled a memorandum signed by Rumsfeld and detailed in the margins, “Make sure this is accomplished.”

Hypocritically, the U.S. applied torture practices during interrogation sessions which it condemned other nations for. The waiver of the Geneva Conventions was instructed as an exception, allegedly to reduce the risk of a terror threat. The underlying reason was to guarantee impunity for U.S. officials involved in approving torture techniques.

Havin authorized torture, Rumsfeld could not feign ignorance. However, even as warnings increased and evidenced surfaced publicly, Rumsfeld refused to halt the torture program. The photos from Abu Ghraib, as well as leading mainstream media articles highlighting the U.S. role in torture failed to serve as a deterrent. On the contrary, Rumsfeld authorized further aggression against detainees in January 2003. A further endorsement of impunity came from Bush, who refused Rumsfeld’s resignation twice.

Notably, Rumsfeld refused the torture label in 2004. “What has been charged so far is abuse, which I believe technically is different from torture. I’m not going to address the “torture” word,” he had stated. Yet Article 1 of the UN Convention Against Torture is clear, despite Rumsfeld’s futile play on semantics. How does the U.S. describe using a nude prisoner at Abu Ghraib for target practice, for example?

Accolades may continue to pour in for Rumsfeld, but history will continue to judge the ravages of U.S. imperialist violence.

I saw up close how Rumsfeld deliberately caused the deaths of US troops for personal gain. He deserves a special place in hell

0 thoughts on “Rumsfeld’s Legacy of torture in U.S. imperialist history”