“Chinese Aggression” Is Just China Responding To US Aggression 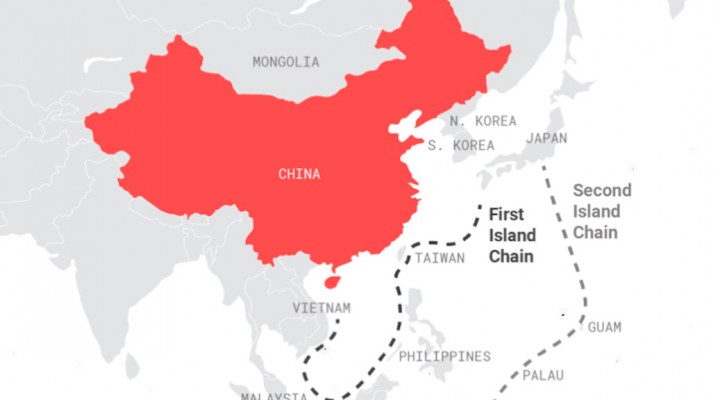 It’s an especially dumb day for anti-China propaganda. The Biden administration has imposed trade restrictions on 34 Chinese institutions on the unsubstantiated allegation that they are developing “brain control weaponry”, a claim the mass media have been all too happy to uncritically pass on to the public. Between that and the ridiculous reporting on Russian Havana Syndrome ray guns it’s like they’re literally trying to get everyone to wear tinfoil hats.

Then there’s the Tucker Carlson guest who just told Carlson’s massive audience that the US military needs to be full of “Type A men who want to sit on a throne of Chinese skulls.” It’s highly disturbing how much the mass media have been talking about war with China like it’s a foregone conclusion lately, almost as though they’re working to normalize that horrifying idea.

There’s also this new article for The Hill, hilariously titled “‘Allies’ China and Russia are ganging up on America”, about how the poor widdle US empire is being bullied by mean old Xi and Putin’s increasingly tight-knit collaboration. It is authored by Gordon Chang, who has been wrongly predicting the imminent collapse of China for decades, and is plainly absurd because the Moscow-Beijing alignment is in reality nothing other than the natural consequence of two nations realizing the need to work together against the globe-spanning power structure that is trying to bully them into submission.

The US military budget has once again increased despite the US ending a war this year, and despite its facing no real threats from any nation to its easily-defended shores. The increase has been largely justified by the need to “counter China” and includes billions in funding for the ongoing construction of long-range missile systems on the first island chain near the Chinese mainland, explicitly for the purpose of threatening China. One need only imagine what would happen if China began constructing a chain of long-range missile systems off a US coastline to understand who the actual aggressor is between these two powers.

In reality, concern trolling from the western political/media class about things China is doing both internationally and domestically has pretty consistently been about actions that China has taken in response to aggressions from the US and its allies. Such concern trolling is generally framed as opposition to alleged human rights abuses and the need to protect China’s neighbors from “Chinese aggression”, but in reality it’s done to facilitate the agenda to make China weaker and smaller by any means necessary.

The actual source of tensions between the US and China never actually has anything to do with “human rights” or “protecting” anyone; that’s just the narrative overlay pinned on top of the actual agenda. The actual source of those tensions is always the fact that it is in the US empire’s interests to make China smaller and weaker and it is in China’s interests to be big and strong. The US resolved after the fall of the Soviet Union to prevent the rise of any other rival superpower, and all of the grievances we see aired about alleged Chinese abuses are really just justifications for aggressions geared toward undermining, subverting, threatening, out-maneuvering and balkanizing China to make it weaker and smaller.

Pretty much everything China gets slammed for by the imperial media is actually a response to western aggressions, whether you’re talking about Xinjiang, Hong Kong, Taiwan, territorial disputes over borders or ocean waters, or domestic authoritarianism. The US is consistently the aggressor, and China is consistently responding defensively to those aggressions.

Only an absolute moron would believe the US and its allies actually care about Muslims in Xinjiang after they just spent the last two decades slaughtering Muslims by the millions in their post-9/11 wars of aggression. The propaganda narratives focus on human rights, but the real reason is that Xinjiang is a very geostrategically valuable region that US imperialism would benefit from carving away from China, and Beijing would benefit from keeping. Take this excerpt from a 2017 SBS article about China’s Belt and Road Initiative (BRI) to illustrate (emphasis mine):

An example of one significant BRI project that has multiple purposes is the creation of an overland route from Xinjiang in China’s far west through Pakistan to its deep water Gwadar port on the Arabian Sea. US$54 billion of infrastructure is planned for this stretch, despite some of the route passing through territory disputed by India and Pakistan.

This route gives China cargo overland access to the Arabian Sea, will spur investment in Xinjiang, and opens up a new route into China for energy imports from the Middle East — a route that is not vulnerable to US maritime power like its east coast sea lanes.

This map says more than any article you'll ever see in corporate media about why Western imperialist countries (that have spent decades killing Muslims) suddenly pretend to care about Uyghurs in Xinjiang, China.

They want to break China up and stop its Belt and Road Initiative. pic.twitter.com/mhWSsrtSIu

When Uyghur separatist groups began inflicting acts of terror with the goal of driving the Chinese government out of Xinjiang and creating their own state, Beijing had essentially three choices:

Beijing went with option number three, and the alternative it found was the aggressive deradicalization campaign it ended up implementing and the re-education facilities it has been so widely criticized for. This move would surely have entailed many of the abuses you’d expect from a mass-scale police action and dramatic escalation of authoritarian policies, but claims that it constituted “genocide” have been soundly discredited by independent research groups and by members of the public using publicly available information, while the most egregious allegations of abuse have been shown to be subject to manipulation and riddled with major plot holes.

You can criticize Beijing for how it went about its dilemma in Xinjiang all you want, but it was plainly universes less draconian than the US approach of killing millions and displacing tens of millions in its barbaric “war on terror”. And unlike the “war on terror”, Beijing’s approach actually worked, which even western media have been forced to grudgingly concede as tourism surges in Xinjiang.

I would like to think that maybe in the future people will be slightly more skeptical about sensationalist claims about human rights in official enemy countries but that's probably being optimistic https://t.co/nkdVI3rOsw

The west has understood for a very, very long time that it needs to keep China weak and small to retain supremacy. That’s why so many narratives revolve around “liberating” (balkanizing) parts of China from Beijing. Here’s a Winston Churchill quote from over a century ago:

I think we shall have to take the Chinese in hand and regulate them. I believe that as civilized nations become more powerful they will get more ruthless, and the time will come when the world will impatiently bear the existence of great barbaric nations who may at any time arm themselves and menace civilized nations. I believe in the ultimate partition of China — I mean ultimate. I hope we shall not have to do it in our day. The Aryan stock is bound to triumph.

This pattern of working to make China weaker and smaller is the same with Hong Kong, where the US was actively working to facilitate the balkanization of that area before Beijing shut down its interventionist operations. It’s the same with Taiwan, which has served as a US proxy for decades, has previously housed US nuclear weapons, is currently hosting US troops, is the subject of an astonishingly virulent western propaganda campaign, and plays a major role in US geostrategic interests.

It’s the same with the militarization of the South China Sea. Xi Jinping had been offering a mutual demilitarization of the sea, and instead Obama ramped up tensions with the still-ongoing “pivot to Asia” which has seen a continuous buildup of US and allied military activity in the area. As former UN Security Council President Kishore Mahbubani explained in an interview last year:

“I quote a former American ambassador to China, Stapleton Roy, who told me, ‘Kishore, when Xi Jinping made an offer to demilitarize the South China Sea, America should have grabbed that offer and agreed to stop all our military activities in the South China Sea. That would have pushed the Chinese out.’ Of course, the Americans would be out too. But the South China Sea is much more important to China than it is to America. If America steps out, the Chinese military steps out. And that’s a win for America, right? Instead, the U.S. Navy responded by sending naval vessels. So Xi said, ‘Okay. You reject my offer. So be it.’”

It’s the same even with the authoritarian domestic policies for which China is frequently criticized by the western world. We learned in a recent Bloomberg article that US spies are finding it hard to conduct operations against the Chinese government because its strict policies make it impossible for them to function.

“Those efforts were detailed extensively in 2017 by the New York Times, which said as many as a dozen U.S. sources were executed by China, with others jailed, in what represented one of the worst breaches ever of American spying networks,” the article also notes.

As John Pilger documented in his prescient “The Coming War On China”, the US has been surrounding the PRC with military bases and weaponry, building a “noose” around that nation which now includes the aforementioned long-range missile systems currently under construction through the first island chain. If any foreign power were doing this to the United States it would be considered an act of war, and war would be declared immediately, but it somehow never enters westerners’ heads that China could be the one who is responding defensively to an aggressor.

None of this means that China is run by innocent little girl scouts who never do anything wrong, it just means it’s clearly not the aggressor in these conflicts, and that the picture we are presented with in the western empire’s frenzied campaign to manipulate public thought about China is not based in reality. The propaganda campaign is so pervasive and forceful that even people who are aware it’s happening still commonly fall for its lies and distortions just because there’s so much of it coming from so many different directions.

The propaganda campaign against China is not going to go away; it’s going to get far louder, crazier, and more aggressive. With each new shrill narrative that comes up, research it with the question “How is this geared toward making China weaker and smaller?” in mind. You’ll find something there every time.

It doesn’t have to be this way. There’s no good reason nations can’t collaborate with each other toward the common good instead of squandering all their energy and resources in this insane struggle of US hegemonic conquest. The word “detente” never enters into mainstream discourse because it does not serve the interests of the western imperialists who rule us, but it does serve everyone else, infinitely more than pouring fortunes into cold war brinkmanship and flirting with the prospect of world war between nuclear-armed nations.

US Embargo Targets Cambodia Over Close Ties with China