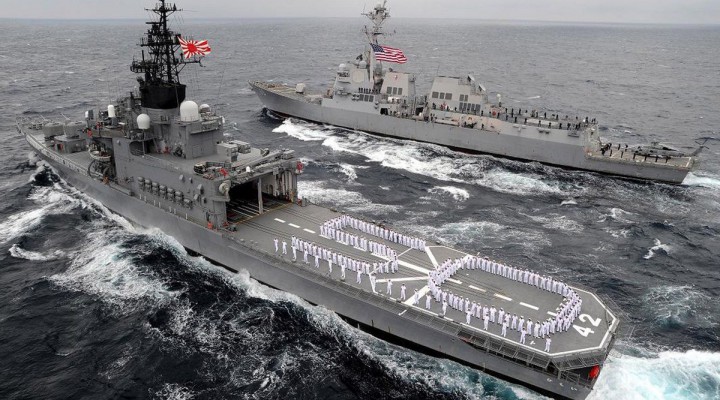 In mid-July, Japan’s Ministry of Defence issued a White Paper that attracted the close attention of officials and experts from neighbouring countries as well as the US.

The document contains a number of features indicating dynamic changes in the country’s military and political planning, which, along with Washington’s incitement and the country’s engagement in regional projects such as the Quadrilateral Security Dialogue, points to Japan’s role as an American client state and a continued policy of escalation with its immediate neighbours.

Looking at the introduction to the White Paper, it seems that Japan now has two main threats – China and North Korea.

It states: “Looking at the situation around Japan, China has continued its unilateral attempts to change the status quo in the East and South China Seas. China Coast Guard (CCG) vessels are sighted almost daily in the contiguous zone surrounding the Senkaku Islands, an inherent part of the territory of Japan, and repeatedly intrude into Japan’s territorial waters. Furthermore, there have also been incidents of CCG vessels approaching Japanese fishing boats while intruding into Japanese territorial waters, further making the situation serious. Against this backdrop, China entered into force the China Coast Guard Law in February 2021. The CCG Law includes problematic provisions in terms of their inconsistency with international law. Sources of inconsistency include, among others, ambiguity as to geographical areas the CCG Law applies and how the rules governing the use of weapons are implemented. The CCG Law must not be allowed to infringe on the legitimate interests of the relevant countries including Japan. Furthermore, the raising of tensions in the East China Sea and other sea areas is completely unacceptable.

Further on, the term “Indo-Pacific region” is used, which was coined in the US, and it states that Japan would be committed to a “Free and Open Indo-Pacific” region. Japan’s allies are listed as the US, Australia, India, Canada and New Zealand, as well as European countries including the UK, France, and Germany.

A number of pages are devoted to disasters and relief operations for earthquakes and other natural disasters, and a separate section describes the importance of the space, cyber and electromagnetic spectrum domains.

A Taiwanese newspaper has also drawn attention to the fact that Japan’s Ministry of Defence has removed Taiwan from the map of China for the very first time.

In previous years, Taiwan and China were included together in the same chapter and on the same map, drawing criticism from Taiwanese living in Japan. However, the latest version emphasises the difference between the two, indicating a change in policy by Japanese Defence Minister Nobuo Kishi.

Instead, Taiwan has been included in Part I, Chapter 2, Section 3, under the heading “Relations between the United States and China, etc.”.

While the focus is on the current situation of deepening antagonism between the US and China, this section also includes an introduction to the military situation in Taiwan.

In the past, Taiwan was included as a “region” on the map of China in Part I, Chapter 2, Section 2, entitled “Deployment and Strength of the People’s Liberation Army”.

In the new version, Taiwan has been completely greyed out from the map of China and its theatre command.

Japan’s Ministry of Defence stresses that “[s]tabilizing the situation surrounding Taiwan is important for Japan’s security and the stability of the international community.” It goes on to say: “Therefore, it is necessary that we pay close attention to the situation with a sense of crisis more than ever before.”

The next day, Taiwan’s Ministry of Foreign Affairs welcomed the changes to the white paper, thanking Japan’s Ministry of Defence for “highlighting the importance” of stabilising the situation around Taiwan and paying “close attention to the situation with a sense of crisis more than ever before.”

Russia takes up three pages, or at least it does in the English digest version. It does not state that Russia is a threat or a challenge; it merely lists a few statements of fact, such as Russia is modernising its military equipment, including strategic nuclear forces, promoting the development of hypersonic weapons, and expanding its military cooperation with China.

A few paragraphs focus on Russia’s activities in “Japan’s Northern Territories”, including the full deployment of the S-300V4 surface-to-air missile system. It also claims that Russia has conducted cyber attacks, including specific operations related to the Tokyo Olympics. References are provided to resources in the US and UK. It is more than likely that Japan’s Ministry of Defence has no verified cyber attack data of its own, so it has merely copied fabricated information from its Western partners.

There is a section devoted to Japan’s cooperation with the US, of course, from which one learns that the US bases in Japan are unlikely to be withdrawn any time soon; they can only change location. In Okinawa in particular, which has been the focus of an ongoing scandal over US bases, land reclamation work has been carried out, thus expanding the territory of the Camp Schwab base.

With regard to security challenges, Japan is concerned about the following:

– the ability to respond in space;

– ensuring the security of cyber systems;

– developing the capabilities of the electromagnetic spectrum; and

– responding to catastrophes and large-scale natural disasters (including the COVID pandemic).

It is telling that Russia is always willing to fully cooperate, and President Vladimir Putin recently made a special offer to Tokyo regarding the joint development of the Kuril Islands. As a vassal state dependent on the US, however, it is unlikely that Japanese politicians will dare to act in the interests of their country and their people. Instead, they will continue to carry out Washington’s instructions.