HOME / WORLD / Does Japan control the trigger for US nuclear war on China? 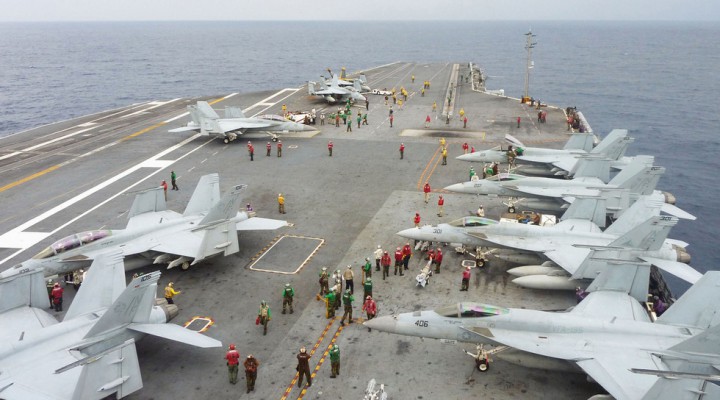 Statements made by Japan’s Deputy Prime Minister about his country’s need to defend Taiwan have raised the specter of a “Japan exception” to China’s no-first-use policy on nuclear weapons.

In April this year, Japanese Prime Minister Suga Yoshihide became the first foreign leader to visit the White House after the swearing in of Joe Biden as America’s 46th President. After private discussions, Yoshihide and Biden issued a joint statement entitled “US-Japan Global Partnership for a New Era.” What made it stand out from similar joint releases over the past decades of US-Japanese relations was the fact that, for the first time in over 50 years, the Japanese and American leaders made mention of Taiwan, declaring “we underscore the importance of peace and stability across the Taiwan Strait and encourage the peaceful resolution of cross-Strait issues.”

While the statement was, on the surface, rather innocuous, the Chinese Embassy in the US immediately reacted, declaring Beijing’s resolute opposition to what it deemed to be interference in China’s internal affairs, and noting that the talks had gone beyond the scope of normal bilateral relations, harming third-party interests and threatening peace and stability in the region.

While most observers might think the Chinese objection was centered on its long-standing claim on Taiwan proper, the trigger point was, more likely, the specific reference made in the statement to a tiny cluster of uninhabited rocky islands situated some 170 kilometers (105 miles) north of Taiwan and around 400 kilometers (248 miles) due west of Okinawa. These islands, known in Japan as the Senkaku Islands and in China as the Diaoyu Dao Islands, are located not only in rich fishing waters, but also on top of economically viable underwater oil and gas deposits. While their ownership is a matter of ongoing legal dispute, with China viewing them as constituting part of Taiwan, and Japan as part of the Okinawa prefecture, at the present time the islands are administered by Japan.

The US-Japanese joint statement reiterated Washington’s “unwavering support for Japan’s defense under the US-Japan Treaty of Mutual Cooperation and Security, using its full range of capabilities, including nuclear.” It then went on to reaffirm “the fact that Article V of the Treaty applies to the Senkaku Islands,” adding that both the US and Japan “oppose any unilateral action that seeks to undermine Japan’s administration of the Senkaku Islands.”

Left to its own devices, the Sino-Japanese dispute over the Senkaku/Diaoyu Dao Islands should have remained low-key. But on July 6, Japan’s Deputy Prime Minister, Taro Aso, reportedly stated that “If a major problem took place in Taiwan, it would not be too much to say that it could relate to a survival-threatening situation [for Japan],” citing language which specifically triggers Japan’s Constitutionally-mandated right of collective self-defense, where it would be permitted to deploy its armed forces in support of an ally who had been attacked. A “survival-threatening situation” occurs when an armed attack against a foreign country allied with Japan poses a clear risk of threatening Japan’s survival.

“We need to think hard that Okinawa could be the next,” Aso was quoted as saying, indicating the specific nature of the “survival-threatening situation” he spoke of.

While China has never expressed any territorial interest in either Okinawa or the other populated islands contained in the Okinawa prefecture, the fact that Japan views the Senkaku Islands as part of Okinawa, and China views the Diaoyu Dao Islands as part of Taiwan, means that any Chinese move on Taiwan would, as a matter of course, include asserting its claim over the disputed islands. This, in turn, would trigger Article V of the US-Japan Treaty of Mutual Cooperation, which is backed by the nuclear arsenal of the United States.

The implications of Aso’s words appeared to have been lost on almost everyone but the Chinese, who declared that the Japanese Deputy Prime Minister’s words had “harmed the political foundation of China-Japan relations,” adding that “one should not underestimate the Chinese people’s staunch resolve, firm will, and formidable ability to defend national sovereignty.”

If Japan came to the defense of Taiwan in any future attempt by China to assert, through force, its territorial claim on that island nation, China would go to war with Japan. This in turn would trigger the US-Japanese Treaty of Mutual Cooperation and Security, inclusive of the US nuclear umbrella that currently shrouds the Japanese islands–but not Taiwan.

In short, Japan just made any future Chinese military move against Taiwan a trigger for a general nuclear conflict between China and the US. Put in more stark terms, Japan has put the continued viability of the human race on planet earth at risk over a cluster of unpopulated islands located in the East China Sea.

When seen from this context, what happened next does not seem as off the cuff or ridiculous.

The “exception” referred-to in the video is the long-standing Chinese declaratory policy of “no first use” when it comes to nuclear weapons. According to the video, “When we [China] liberate Taiwan, if Japan dares to intervene by force, even if it only deploys one soldier, one plane and one ship, we will not only return reciprocal fire, but also start a full-scale war against Japan. We will use nuclear bombs first. We will use nuclear bombs continuously until Japan declares unconditional surrender for the second time.” The video went on to say “What we [China] want to target is Japan’s ability to endure a war. As long as Japan realizes that it cannot afford to pay the price of war, it will not dare to rashly send troops to the Taiwan Strait.”

It should be noted at this juncture that Six Army Strategy is not an official arm of the Chinese military or government, and as such is not able to make declaratory policy statements on behalf of either. To be clear – the “Japan Exception Theory” is not official Chinese policy.

Within days the video was taken offline, but not before it was picked up and reposted by the Baoji municipal government, an official entity within the Chinese Communist Party responsible for governing the city of Baoji, the second largest municipality in the province of Shaanxi, with a population of approximately four million people. The video quickly received nearly 7,000 likes, with over 150,000 views.

There has been no official comment by either the Baoji government or the Central Communist Party of China, leading many observers to ponder the implications of an official organ of the Chinese Communist Party promoting the notion of a “Japan Exception” to China’s no-first-use policy on nuclear weapons.

The implications of a “Japan Exception Theory” are enormous. It has been widely assumed that the American nuclear umbrella over Japan was purely a deterrent against any nuclear attack against that nation, an event previously considered so remote in terms of possibility that the issue of nuclear war, outside of the context of North Korea, was deemed highly unlikely.

Moreover, the US is very reticent about giving any nation control over what it views as its exclusive prerogative when it comes to the employment of its nuclear arsenal. It has long been assumed that any Chinese military move on Taiwan would make exclusive use of conventional (i.e., non-nuclear) forces by all parties involved (President Eisenhower considered the use of low-yield nuclear weapons in any defense of Taiwan from Chinese attack back in 1958, but ultimately rejected this plan due to its risk of Chinese nuclear retaliation against US bases in the region.)

Japan’s new “forward defense” posture, where it would fight China in Taiwan to preserve the sovereignty of the Senkaku Islands, however, appears to put nuclear weapons back into the equation, and not at the initiative of the United States. Moreover, if China is serious about the “Japan Exception Theory” (and there is no official statement from the Chinese authorities suggesting for a moment that they are), then a nuclear conflict will automatically be triggered by any Japanese military intervention on behalf of Taiwan.

In short, the US is no longer in control of how and when it would use its nuclear arsenal. Japan is.

One would imagine that this new reality does not sit well with policy makers in Washington, DC. One can imagine that there is a flurry of diplomatic activity between Japan and the US seeking clarification of Deputy Prime Minister Aso’s statements, solidifying the parameters for the employment of the US nuclear umbrella over Japan, and –for the first time– taking a hard look at the need for strategic arms control talks between the US and China to contain and reduce the threat of China’s nuclear arsenal on the American homeland.

The US bombed Japan in 1945 to demonstrate its power to the USSR. Intimidation, NOT deterrence was, is and always will be the goal

ATOMIC BOMBINGS AT 75: The Decision to Drop the Bomb on Japan and the Genesis of the Cold War

0 thoughts on “Does Japan control the trigger for US nuclear war on China?”