HOME / Multimedia / Why Taking US NED Money is Wrong 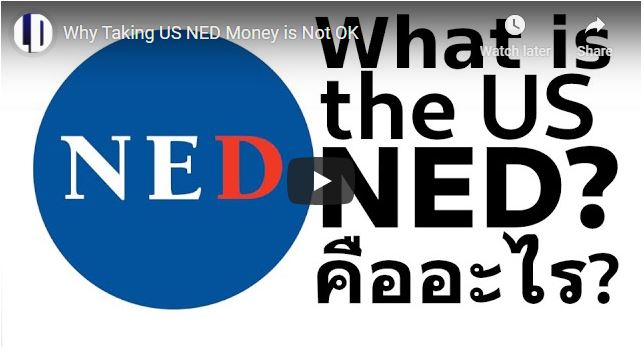 The National Endowment for Democracy has as much to do with promoting “democracy” as the illegal US invasion of Iraq – code name “Operation Iraqi Freedom” had to do with bringing “freedom” to the Iraqi people. And as it turns out the same circle of regime change promoters are/were involved in both.

I cover the US National Endowment for Democracy’s (NED) board of directors – pointing out how many of them have been involved in some of the worst crimes against humanity of the 21st century including promoting and even participating in the invasion and occupation of Iraq in 2003.

I also explain why taking US NED money poses a danger to national security – and specifically why Thai agitators taking the money pose a danger to Thailand’s peace, stability, and future.

NED Board of Directors: https://www.ned.org/about/board-of-directors/

0 thoughts on “Why Taking US NED Money is Wrong”