HOME / SOCIAL/CULTURAL / What is the US National Endowment for Democracy (NED)? 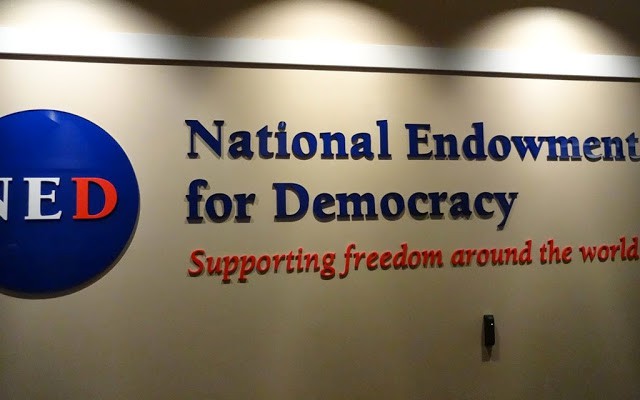 Who sits on the current NED board of directors and how do such people get away with claiming to promote democracy abroad when they are directly involved in circumventing it at home?

When US-backed regime change begins in a targeted nation, many – particularly those supporting protests – will deny the US is involved.

When US involvement is no longer deniable – many will finally admit it – but backpedal and claim there is nothing wrong with the US supporting “freedom” and “democracy” abroad.

The protests in Thailand are mainly funded through the US National Endowment for Democracy (NED) with all of this funding appearing on the US NED’s official website as well as in admissions from these groups themselves during previous interviews, and occasionally featured on their own websites when and if they make financial disclosures.

The NED and the fronts they are funding all claim to be promoting democracy. Others attempting to expose this funding claim it represents political interference and is a bad thing.

But what is the NED and how could the US promoting democracy be a bad thing?

The US has openly invaded nations, murdered sitting governments, killed hundreds of thousands of people in the process, before hand-picking favorable client regimes. The US NED is simply a subtler way of achieving regime change – but often also helps pave the way for destabilization leading to direct US military intervention as was the case during the 2011 “Arab Spring.”

In fact, many of the people sitting on the US NED board of directors have signed their names to documents, op-eds, and essays calling for the invasion and regime change by force of other nations including Afghanistan in 2001, Iraq in 2003, Libya and Syria in 2011, and Ukraine in 2013-2014.

Some of them even participated directly. 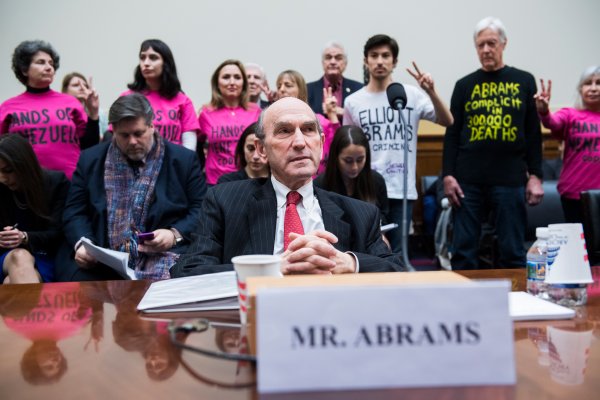 This includes Neo-Conservatives like Elliot Abrams who is currently the US envoy to Iran after openly attempting to overthrow the government of Venezuela.

The London Guardian in an article titled, “US diplomat convicted over Iran-Contra appointed special envoy for Venezuela: Elliott Abrams, who was linked to failed coup against Chávez, to join Pompeo to urge security council to recognize Guaidó as head,” would report (emphasis added):

Elliott Abrams was appointed US special envoy for Venezuela on Friday, as Donald Trump’s administration and European leaders on Saturday further increase the pressure on the socialist president, Nicolás Maduro, to step aside from leading the country he has taken into a deepening crisis.

Abrams will accompany the US secretary of state, Mike Pompeo, to a meeting of the UN security council in New York on Saturday, during which Pompeo will urge members to join the US in declaring Venezuela’s opposition leader Juan Guaidó as the legitimate head of state.

Abrams is widely remembered in Central America, but particularly from his time in the Reagan administration, when he tried to whitewash a massacre of a thousand men, women and children by US-funded death squads in El Salvador, when he was assistant secretary of state for human rights.

Anyone of good conscience approached by NED to join a board of directors including Elliot Abrams alone would be unable to reconcile what NED claims to stand for and what it – through leadership like Abrams – is actually doing.

But the NED board of directors includes many, many other characters with open ties to corrupt corporate-financier interests and proven track records of eagerly promoting war and enabling US-backed regime change around the globe. 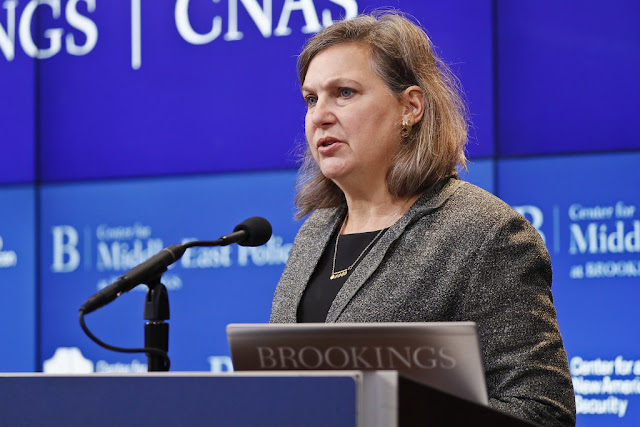 This includes Victoria Nuland who played a key role in leading US regime change efforts in Ukraine in 2013-2014.
Reuters in its article, “Leaked audio reveals embarrassing U.S. exchange on Ukraine, EU,” would admit (emphasis added):

A conversation between a State Department official and the U.S. ambassador to Ukraine that was posted on YouTube revealed an embarrassing exchange on U.S. strategy for a political transition in that country, including a crude American swipe at the European Union.

The audio clip, which was posted on Tuesday but gained wide circulation on Thursday, appears to show the official, Assistant Secretary of State Victoria Nuland, weighing in on the make-up of the next Ukrainian government.

Nuland was also the CEO of the Center for a New American Security (CNAS) – a pro-war policy think tank funded by big-defense corporations including Northrop Grumman, Boeing, Lockheed Martin, BAE Systems, Raytheon, General Dynamics, DynCorp – all alongside big-oil corporations like BP, Chevron, and Exxon – fronts posing as “liberal” and “opposed” to such interests including convicted financial criminal George Soros’ Open Society Foundation – and big-banks including JPMorgan and Goldman Sachs.

The security crisis US intervention in Ukraine created alone – and the subsequent deployment of US missiles to Europe made millions for CNAS sponsors Lockheed Martin and Raytheon. And while chaos NED director Victoria Nuland helped create is filling the accounts of US defense contractors – Ukraine remains an undemocratic, dysfunctional nation like all other targets of US regime change.

Another member of NED’s board of directors is Neo-Conservative George Weigel – who like Elliot Abrams – is an enthusiastic supporter of US military aggression abroad and US-backed regime change.

In American Magazine in a 2003 article titled, “The Just War Case for the War,” Weigel would help repeat and amplify deliberate lies regarding “weapons of mass destruction” in an attempt to build justification for an otherwise unjust war.

Virtually every point Weigel made was built on deliberate lies – lies many attempted to expose before the 2003 invasion and lies now exposed to the world in the wake of the disastrous invasion and – nearly 2 decades later – an Iraq still laid waste, divided, and in chaos because of US aggression, its attempts to install a client regime, and its punitive military, political, and economic campaigns following its failure to do so.

And this is just a small sample of what sits on the NED’s board of directors.

The rest of the NED’s board of directors is no better.

There is Scott Carpenter – now at Google – who participated directly in the US invasion and occupation of Iraq as a member of the “Coalition Provisional Authority in Iraq” from April 2003 to July 2004. He is also a member of the pro-war Washington Institute for Near East Policy.

US Senator Ben Sasse – Republican – is also an NED board member. He is openly anti-Chinese – blaming China for COVID-19 and praising Canada for the arrest of Huawei CFO Meng Wanzhou.

US Senator Tim Kaine – Republican – had been an advocate for much wider US military intervention in Syria including calls for a no-fly-zone. It is now revealed that Washington’s so-called “freedom fighters” were in fact extremists fighting under the banners of terrorist organizations including Al Qaeda, its Syrian franchise Al Nusra, and even the self-proclaimed “Islamic State.”

Ambassador Daniel Fried was one of the central architects of NATO’s enlargement after the Cold War – a chief factor driving unprecedented US-Russian tensions today.

NED board member Michele Dunne is the director of Carnegie’s Middle East Program and the pro-war NATO-centric Atlantic Council – both funded by big-defense, big-oil, and big-banks. 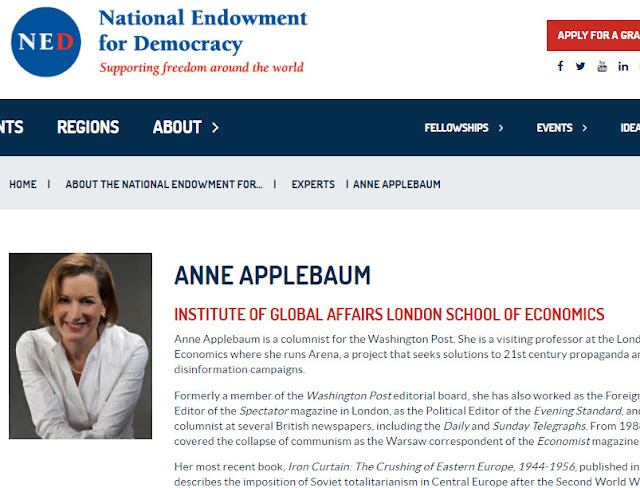 Andrew Card Jr. served in the administrations of George Bush Sr. and George Bush Jr. He was US ambassador to Afghanistan, chairs the US Chamber of Commerce, and held various senior positions at General Motors and the Automobile Manufacturers Association which included GM, Ford, and Chrysler.

Other board members including Kenneth Wollack, Melanne Verveer, Nadia Schadlow, and the above mentioned Victoria Nuland are also all members of pro-war corporate-financier funded policy think tanks including the Brookings Institution and the Council on Foreign Relations.

These policy think tanks short-circuit the democratic processes in the United States by funneling corporate money into the creation of policy, the mounting of lobbying campaigns for corporate-funded policy to be adopted into law by the US Congress, and the creation of media campaigns to sell these policies to a public that does not benefit from them and would otherwise oppose them.

Thus the vast majority of NED’s board of directors are pro-war and represent the largest, most corrupt corporations in the United States – not to mention on Earth. They are involved in a process of denying the American people themselves of democracy at home – and so certainly are not involved in promoting genuine democracy abroad.

They are however, in great need of a smokescreen behind which to advance their agenda. 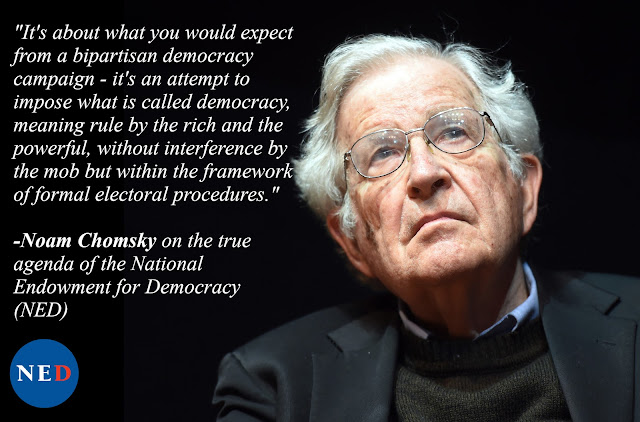 The National Endowment for Democracy is using the “promotion of democracy” as that smokescreen while engaged in political interference and regime change abroad in the pursuit of serving the corporate interests represented by the board of directors and those who fund NED directly.

For our example of Thailand – the US seeks to remove the current government and institutions from power and replace them with those beholden to Washington. This is part of a wider effort to remove pro-Beijing governments from across the region in a bid to isolate and contain China itself.

As mentioned – one US NED-funded front – iLaw – created a petition to rewrite Thailand’s entire constitution. One can only imagine the backlash and response by the US should Russia or China fund organizations inside the US to call for the rewriting of the US Constitution. 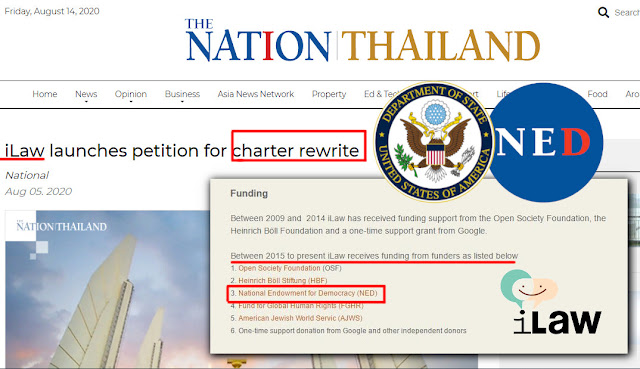 The documented political interference carried out by NED against others is interference the US itself would never tolerate any nation imposing upon it. Such irony and hypocrisy is perhaps the best way of all to highlight just how dubious NED’s work actually is.

The only way to claim the NED is engaged in supporting good around the globe is to completely ignore who funds it, who runs it, why, and what they’ve actually done and are currently doing. Or to ignore the fact that if any other nation did likewise to the US it would be considered an act of war.

0 thoughts on “What is the US National Endowment for Democracy (NED)?”