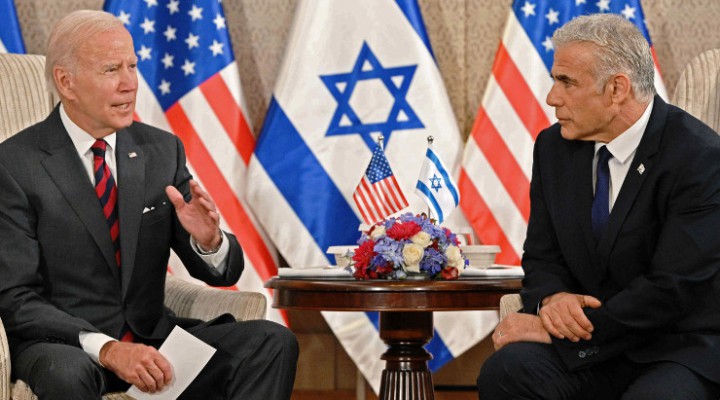 Hopes for the Joint Comprehensive Plan of Action (JCPOA) simply known as the Iran Nuclear Deal seemed to fade further during US President Joe Biden’s recent trip to Israel where the US and Israeli governments signed a pledge to use force against Iran should it pursue nuclear weapons (weapons both the US and Israel possess).

US-based ABC News in its article, “Biden left with few options on Iran as nuclear talks stall,” would claim:

President Joe Biden made a clear promise on Iran, declaring that the country would never become a nuclear power under his watch. But during his time in the White House, the path towards upholding that promise has only become murkier.

During his trip to the Middle East, the president said he would consider using force against Iran only as a “last resort,” although Israel, the US.’s most ardent ally in the region, has pushed for the administration to issue a “credible military threat” against Tehran.

The article would mention the Iran Nuclear Deal specifically, claiming:

…while the administration initially hope to cut a “longer and stronger” deal with Iran, over a year and half of indirect negotiations has produced little movement towards restoring even the original terms of the agreement.

After a monthslong stalemate, a 9th round of talks took place in Doha, Qatar, at the end of June. A State Department spokesperson did not sugarcoat the outcome, saying “no progress was made.”

The Nuclear Deal Was Always a Trap

When President Obama signed the Iran Nuclear Deal, it was celebrated as a breakthrough in US diplomacy and a departure from the previous Bush administration’s expanding wars of aggression spanning Iraq and Afghanistan while threatening Iran next.

Signed by the United States and Iran along with other participating nations (the UK, EU, Germany, Russia, China, and France) in 2015, NBC News in their article, “What is the Iran nuclear deal?” would explain:

The Iran nuclear deal, formally known as the Joint Comprehensive Plan of Action, offered Tehran billions of dollars in sanctions relief in exchange for agreeing to curb its nuclear program.

The agreement was aimed at ensuring that “Iran’s nuclear program will be exclusively peaceful.” In return, it lifted UN Security Council and other sanctions, including in areas covering trade, technology, finance and energy.

At face value, the United States imposing sanctions on Iran to impede its development of nuclear weapons was problematic. The United States is the only nation in human history to use nuclear weapons against another nation, twice. Following the 2001 US invasion and occupation of Afghanistan and the 2003 US invasion and occupation of Iraq, the United States had military forces to Iran’s west and east. US hostilities toward Iran stretch back decades and the US State Department, regardless of administration, has made little secret that Washington seeks regime change in Tehran just as it did in Afghanistan and Iraq.

Worse still, US policymakers as early as 2009 had articulated a ploy by which the US would offer Iran a “deal” before deliberately sabotaging it and using its failure as a pretext for the long sought-after regime change war the US has wanted against Iran.

The Washington DC-based Brookings Institution, funded by the largest corporate-financier interests in the Western world as well as Western governments themselves including the US through the US State Department published the 2009 paper (PDF), “Which Path to Persia? Options for a New American Strategy Toward Iran.” In it, the Brookings Institution’s policymakers explicitly articulated options the US could pursue to achieve regime change in Iran.

These options were broken down into sections and chapters within the 170-page report and ranged from “An Offer Iran Shouldn’t Refuse: Persuasion,” to “Toppling Tehran: Regime Change,” to “Going All the Way: Invasion,” and “The Velvet Revolution: Supporting a Popular Uprising.” Everything from setting diplomatic traps to arming designated terrorist organzations were not only discussed, but in the years that followed the paper’s publication, they were implemented one after the other without success. Remaining on the long list of options are military in nature involving either the US or Israel (or both) waging war directly and openly against Iran.

All that is required before doing so is a pretext, including the “offer” the US made, but Iran “refused.”

…any military operation against Iran will likely be very unpopular around the world and require the proper international context—both to ensure the logistical support the operation would require and to minimize the blowback from it.

The paper then laid out how the US could appear to the world as a peacemaker and depict Iran’s betrayal of a “very good deal” as the pretext for an otherwise reluctant US military response (emphasis added):

The best way to minimize international opprobrium and maximize support (however, grudging or covert) is to strike only when there is a widespread conviction that the Iranians were given but then rejected a superb offer—one so good that only a regime determined to acquire nuclear weapons and acquire them for the wrong reasons would turn it down. Under those circumstances, the United States (or Israel) could portray its operations as taken in sorrow, not anger, and at least some in the international community would conclude that the Iranians “brought it on themselves” by refusing a very good deal.

The Iran Nuclear Deal was doomed before it was ever signed. It was conceived wholly as a pretext for war, not as a diplomatic solution to avoid it.

In many ways, Iran would be foolish not to create a sufficient military deterrence against US aggression, including the development of nuclear weapons if necessary. However, Iran nonetheless agreed to the nuclear deal’s terms and until the US unilaterally abandoned the deal in 2018, abided by it.

In fact, following the US withdrawal from the deal, Iran continued abiding by many of its conditions alongside its other signatories in the vain hope that under a new US administration it could be salvaged.

When US President Joe Biden took office, the obvious first step by Washington should have been to unconditionally rejoin the deal by removing sanctions, followed by Iran’s renewed and full compliance to the deal’s conditions. Yet the US demanded Iranian compliance first before even agreeing to negotiate Washington’s return to the deal.

It was clear long before President Obama’s signature was inked on the deal’s documents that the US would sabotage it, blame Iran, then pursue renewed and expanded aggression against Iran directly, by proxy, or both. President Trump in 2018 took advantage of America’s domestic politics and the perceived notion that US “Republicans” seek a harder line versus Iran in order to abandon the deal. Because of President Trump’s perceived trait as an “outsider” both to his own party and wider US politics, the US could shift the blame squarely on his administration. Yet the continuity of this ploy across presidential administrations is evident by the fact that upon coming into office, President Biden did not immediately and unconditionally return the US to the deal’s framework.

Instead, President Biden’s administration prevented America’s return to the deal by creating unreasonable preconditions placed entirely upon Iran. With President Biden’s statement in Israel coupled with a recent claim made by US National Security Adviser Jake Sullivan that Iran is preparing to supply Russia with drones, the US is closing the door on the deal indefinitely.

Further evidence of continuity between US administrations can be seen throughout the US-led destabilization, invasion, and occupation of Syria. The campaign was meant as one of several prerequisites laid out by the Brookings Institution’s experts in 2009 before attempting regime change against Iran directly. Ironically, as the Obama administration appeared reconciliatory toward Iran by signing the Iran Nuclear Deal, the same administration presided over the devastating proxy war targeting Iran’s key ally in the region, Syria.

Support of US aggression in Syria transcended presidencies, from the Bush administration who set the stage for it, to the Obama administration who presided over the opening phases of hostilities and occupation, to the Trump and now Biden administrations who have perpetuated a US military presence in Syria along with a policy of denying Syria its key fuel and food production regions in the east to block reconstruction. US foreign policy toward Syria and Iran should not be interpreted separately. The fate of both nations is entwined and illustrates the wider agenda the US is pursuing in the region and has been for decades regardless of US administration.

Barring a fundamental reordering of both American foreign policy objectives and a reordering of the special interests driving them, the Iran Nuclear Deal’s prospects of success will only fade further in the distance. While Tehran’s patience is admirable, Iran and its allies must prepare for the inevitable hostilities that will follow US blame against Tehran for “undermining” a deal the US never had any intention of honoring in the first place.