On the Thai King’s Birthday: Western Lies vs. Reality 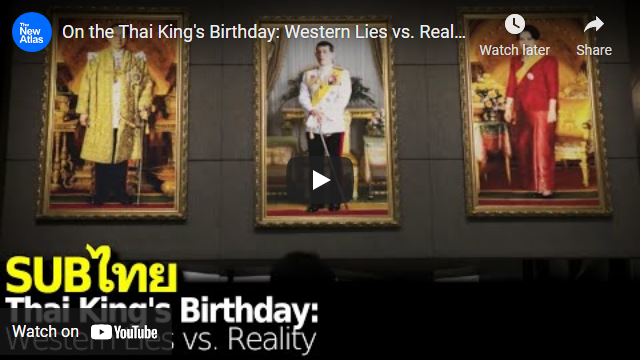 Thailand’s King has been attacked by the Western media and US government-funded protesters for years. Underneath the West’s lies and the attacks from their proxies is an entirely different story.

The Thai monarchy provides the Thai people unity. The nation – never once colonized by a Western empire – is now an important ally of China. The West is attacking Thailand’s monarchy to divide its people and finish what Western imperialists have tried and failed to do for centuries.

Thailand Father’s Day 2020: A Look from the Outside In…

No, the US Didn’t Create Thailand’s Modern Monarchy (SUBไทย)

The Royal Thai Police: What They’re Protecting Thailand From

Twitter Officially Teams Up with US-Funded Opposition in Thailand

Ex-Reuters Staffer Andrew MacGregor is Looking for a Debate. Will he Debate me?

0 thoughts on “On the Thai King’s Birthday: Western Lies vs. Reality”