HOME / WORLD / A Decade On: West’s War on Syria Continues

A Decade On: West’s War on Syria Continues 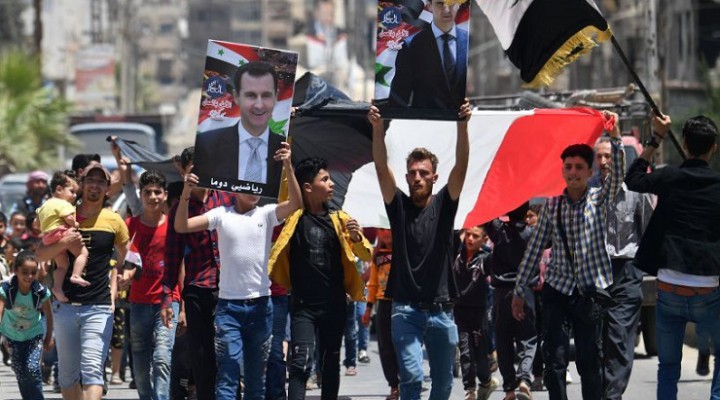 As Syrian elections approached, the US, France, and Germany  worked together to undermine them.  This was not because they truly believed the elections weren’t “free and fair,” but simply because there is no possibility for their client regime of choice to come to power.

This is despite these same Western nations – hand-in-hand – lecturing the world about “democracy,” and using its alleged “lacking” as a pretext to interfere in the affairs of nations worldwide.

The true irony is – even as the UN condemns pressure placed on Syrian voters by factions in Lebanon – the UN appears reluctant to condemn similar pressure or outright restrictions the West is placing on Syrians to likewise inhibit their ability to vote.

UNHCR said it received reports of intimidation and pressure, according to Lisa Abou Khaled, a spokesperson for the agency, adding that the agency was looking into it “to ensure that refugees are free to decide whether or not to vote.”

The same AP article would claim:

France and Germany banned any voting at Syrian missions in their country, with a French Foreign Ministry official saying the elections are “null and void” and there is no point in holding them.

No mention is made by AP about what the UNHCR has said – if anything – about outright restrictions on voting placed on Syrians residing in France and Germany – restrictions that surely infringe on Syrian refugees and their right to decide “whether or not to vote.”

Despite these Western nations posing as self-appointed global arbiters of what is and isn’t a legitimate election – democracy is a process of self-determination and for Syrians that means a process determined by and for Syrians – not the foreign ministries of France and Germany and certainly not the US State Department.

Ten Years On: The West’s War on Syria Continues

Ten years on since the US launched its proxy regime change war against Syria – the Western media continues claiming the ongoing conflict is a “civil war.”

It is this fundamental lie that is used to not only justify the latest round of suppressing Syrian voters, but Western intervention in Syria altogether. AP would claim:

Syria has been engulfed in civil war since 2011, when Arab Spring-inspired protests against the Assad family rule turned into an armed insurgency in response to a brutal military crackdown.

Yet since as early as 2011 the Western media has piecemeal admitted to the US-engineered nature of both the so-called “Arab Spring” and the fact that the war in Syria was driven by US-armed militants flooding into the country, not “rising up” from within.

A number of the groups and individuals directly involved in the revolts and reforms sweeping the region, including the April 6 Youth Movement in Egypt, the Bahrain Center for Human Rights and grass-roots activists like Entsar Qadhi, a youth leader in Yemen, received training and financing from groups like the International Republican Institute, the National Democratic Institute and Freedom House, a nonprofit human rights organization based in Washington, according to interviews in recent weeks and American diplomatic cables obtained by WikiLeaks.

The same article would also admit that many of the “youth leaders” involved in the initial protests had been trained and backed by US tech firms like Google and Facebook as well as the US State Department itself since as early as 2008.

As early as 2012, not even a year into the conflict, the Western media was regularly admitting to the scale of US support for armed militants fighting the Syrian government and the fact that militant leadership, training programs, and the shipment of arms was being done beyond Syria’s borders – not within them.

Reuters in its 2012 article, “Obama authorizes secret support for Syrian rebels,” would admit:

President Barack Obama has signed a secret order authorizing US support for rebels seeking to depose Syrian President Bashar al-Assad and his government, sources familiar with the matter said.

The article also admitted, regarding Turkey:

Last week, Reuters reported that, along with Saudi Arabia and Qatar, Turkey had established a secret base near the Syrian border to help direct vital military and communications support to Assad’s opponents.

This “nerve center” is in Adana, a city in southern Turkey about 60 miles from the Syrian border, which is also home to Incirlik, a US air base where US military and intelligence agencies maintain a substantial presence.

Thus it is abundantly clear that Syria’s conflict was never an actual civil war. It was a war on Damascus, waged by the US through armed proxies including both foreign fighters and extremists based in Syria.

A decade on, the West makes it clear that “regime change” is still on the agenda, refusing to allow peace and stability to return to the country. To this day, the US is still militarily occupying Syria’s eastern territory, territory essential for wheat and oil production. The US also maintains crippling economic sanctions specifically tailored to prevent reconstruction.

The West is still also insisting on a so-called “political solution,” which means sidestepping the will of the Syrian people through elections – and simply forcing President Bashar Al-Assad from power.

For the Syrian people – and no matter how serious the situation still is in Syria itself – it is clear that President Bashar Al-Assad’s leadership, his relationship with allies like Iran and Russia, and the institutions surrounding his government – the Syrian Arab Army in particular – are responsible for preventing Syria from suffering the much worse fate of other nations targeted by the US-engineered “Arab Spring” in 2011 – including Libya and Yemen.

0 thoughts on “A Decade On: West’s War on Syria Continues”