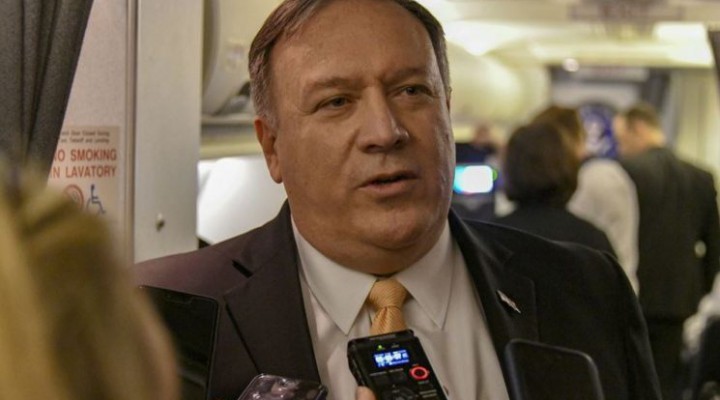 Most people in the Middle East were perplexed. Not surprisingly – they have little experience of American evangelical ‘Rapture’ politics.

Secretary Pompeo’s address to the Middle East from a highly symbolic platform in Cairo (the site of Obama’s vision statement) has bewildered many. The speech seemed to serve mainly as a platform to signal Pompeo’s fundamentalist Evangelism; to emphasise America’s ‘sacred righteousness’; to swipe at President Obama’s uncertain purpose; and to nail Iran as today’s ‘Anti-Christ’.

Most people in the Middle East were perplexed. Not surprisingly — they have little experience of American evangelical ‘Rapture’ politics. And Europeans simply wondered at its extraordinary disconnect with the political reality of today’s Middle East. It seemed bizarre — and Pompeo’s tour of the region fell flat.

Fortunately, we have Michael Vlahos, an American historian, formerly a Professor at the US War College, now teaching at John Hopkins, to give us some context to Pompeo’s address. In his article entitled We Were Made for Civil War, Vlahos writes that whilst Americans are taught “that the Revolution was ‘a miracle’ and that the Civil War ‘made America a nation’; or, as Ralph Waldo Emerson proclaimed, ‘America is the country of the future’, reaffirming the providential destiny of Lincoln’s ‘almost chosen people’” — all this is pure myth.

“Our very identity, from the start, was framed as triumph over the “other.” We cast them out, like France cruelly expelled their heretic Huguenots in the 17th century. For our part, we drove out 100,000 loyalists we once counted as blood brothers. This civil war itself lasted 20 years, from 1763 to 1783, but the ensuing cold war and residual battles with Britain did not end until 1815.

By then there was another fissure in the nation. After 1815 a new cultural migration began. Young America itself split into two opposed ways of life and two increasingly bitter political identities, which fought another 20-year conflict, from 1857 to 1877…

By the 1840s this had begun to come apart: Kinship was sorting itself into two separate American subcultures: one wholly invested in a world of chattel slavery, and another rooted in the populist cry of “free soil, free labor, free men”; one dominated by an aristocratic elite – the other by the Republican yeoman ethos.

This was the North-South split that escalated into civil war, when each side believed they represented not only the sacred American narrative, but [also] the future of the nation … Only the “lucky” generations, from the 1930s to the 1970s, could pretend to celebrate something like national unity. Even then, such privilege was the demesne of a single, favored political majority — completely coterminous with the prevailing liberal establishment …”

As for today, Vlahos explains, “American kinship… is fissuring into two visions of the nation’s future way of life: “Red” virtue imagines a continuity of family and community within a publicly affirmed national community. “Blue” virtue imagines personally chosen communities mediated through the individual’s relationship with the state. So, even though these two divided visions of America have been opposed for decades, and so far have controlled the urge to violence, there is in their bitter contest [of today] a sense of gathering movement toward an ultimate decision.”

Today, Vlahos continues, “two righteous paths are gridlocked in opposition … Red and Blue already represent an irreparable religious schism, deeper in doctrinal terms even than the 16th-century Catholic-Protestant schism. The war here is over which faction successfully captures the (social media) flag, as true inheritor of American virtue. Both perceive themselves as champions of national renewal, of cleansing corrupted ideals, and of truly fulfilling America’s promise. Both fervently believe that they alone, own virtue.”

So there we have it. One part of Pompeo’s address is precisely as Vlahos paints it: It was Pompeo’s attempt to ‘capture the flag’ for the Trump Administration (and its Evangelical base), as true inheritor of American ‘Red virtue’. Pompeo’s references to his having his Bible open daily on his work desk, and his emphasis on America as “a force for good” in the region (which yielded scowls across the region), had nothing to do the realities of the Middle East. In any case, his allusions went way over the heads of his Egyptian audience.

It was, rather, Pompeo preparing the Trump constituency for, what Vlahos terms, the ultimate showdown. ‘Otherness’ is a transforming process, through which former kin (i.e. fellow Americans) are re-imagined as evil – an American inner-enemy – who once defeated, now must be punished.

And it is here, on this point of defeating ‘otherness’ which for Vlahos lies precisely at the core of the American identity, that Pompeo’s demonizing of Iran becomes pertinent — because Iran now typifies ‘otherness’ for Americans. Vlahos writes:

“Sure, the U.S. had a few decades of unity, prefigured by World War I, realized in World War II, and maintaining its warm afterglow into the 1970s. In fact, the world wars took the framing of civil war and adroitly turned the othering impulse outward. Instead of Britons and Tories or Rebels and Copperheads, the evil other was played helpfully, even willingly, by Germany. Moreover, after the Hun’s prostration, their place was taken, also rather willingly, by Soviet Russia. Reimagining and offshoring the other distracted Americans from kinship divides simmering at home.

But the end of the Cold War brought our century of dispensatory unity to a shuddering close.”

And now Iran serves as the evil ‘other’ impulse, adroitly turned outwards by Americans.

And Iran, it seems, lies too precisely at the intersection of another of these shifting internal American faultlines. Stephen Wertheim, argues in The New York Review of Books, that Trump’s 2016 win has split American neoconservatives into two camps: with one camp, symbolised by Mr Bolton, inserting themselves as the foreign policy ascendency within the Trump Administration; whilst the ‘other wing’ has been ‘renewing their ties’ to the Democratic Party.

Here, Wertheim suggests, “Red Virtue” has segued with Bill Kristol and Norman Podhoretz, in their forging of an existential moral threat to American righteousness – in the shape of Islamofascism: “Indeed, neoconservatism draws from the philosophical tradition of Leo Strauss, who wrote in the The City and Man that: “the crisis of the West consists in the West’s having become uncertain of its purpose” [i.e. precisely Pompeo’s complaint against Obama in Cairo]. “For the Straussians, and their intellectual descendants, military conflict offered that sense of purpose”, notes Sugarman. And for Pompeo, Vice-President Pence and Bolton, Iran fits the need precisely (particularly, as it is the principal foe of Israel).

So Pompeo was virtue signaling in his doctrinal portrayal of a demonic Iran in Cairo mainly to the domestic US audience, suggesting that unlike Obama, the Trump Administration has regained its certainty of American ‘purpose’ externally (i.e. in slaying dragons).

‘Blue virtue’ – for the ‘other’ neocon wing – is liberalism and military coalitions of the like-minded – all centred around the righteous, liberal ideology of ‘anti-totalitarianism’.

“For Bolton and company, Donald Trump turned out to be a deliverance,” Wertheim observes. “Trump elevated ‘globalism’ from a marginal slur, to the central foil of American foreign policy and Republican politics.Neoconservatives historically have taken aim at global institutions, if not globalism itself. Few have embodied this notion more than Bolton, who has made a career of bashing both the United Nations and its Security Council”. During the Obama administration, Wertheim notes, Bolton regularly sounded the alarm that “leftists like Obama were attempting to give away American sovereignty, bit by bit, to international bodies”.

For Republican apostates like Jennifer Rubin, David Frum and Max Boot, Wertheim contends the president has offered the “next best thing” to a foreign dictator: “an enemy within [i.e. Trump]”. Trump’s personal degeneracy and unabashed corruption have allowed them to “reclaim their preferred role as the moral truth-tellers in America”.

Well, this is all very well. Yes, Pompeo’s speech was totally disconnected from the Middle East reality, but should we then ignore his rhetoric about Iran, and treat it as nothing more than political grandstanding? Maybe … except might this ‘Rapture politics’ — portraying Iran as the ‘Anti-Christ’ — finally end with the Trump Administration actualizing its claim to some ‘sacred American destiny’ by bombing Iran.

“[F]or either one of these two angry [American] visions to win, there must be a showdown. This demands, perversely, that they work together to bring on open conflict, successfully coercing the majority of Americans to buy into its inevitability. At that point, only a trigger pull is needed.

This is what the confirmation hearings of Brett Kavanaugh and the nearly two-year effort to delegitimize and overthrow President Donald Trump may doing today: getting the two halves of the former nation to pull that trigger.

The Fight. If the political balance shifts dramatically, then conflict checks — held in place by lingering political norms and a longstanding electoral standoff — disintegrate. Suddenly, both newly advantaged and disadvantaged parties rush to a test of wills sooner, rather than later.”

Might Iran become just such a test of wills — A proof of virtuous moral muscularity?