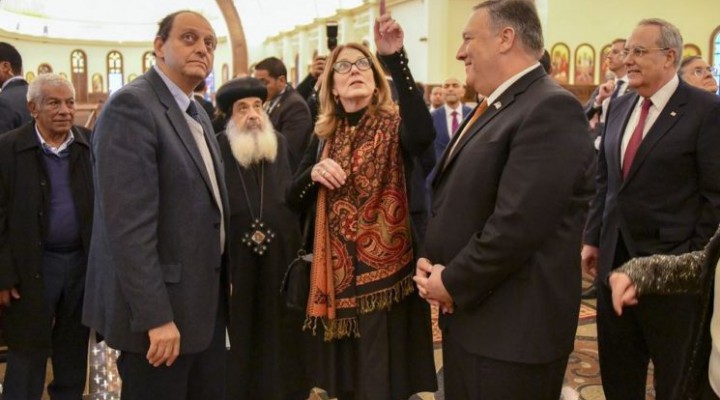 By asserting a “force for good” mandate, Pompeo was actually telling all the autocratic regimes in the Middle East that they can do whatever they want as long as they hate Iran.

The speech made by Secretary of State Mike Pompeo at the American University in Cairo on January 10th deserves more attention than it has received from the US media. In it, Pompeo reveals his own peculiar vision of what is taking place in the Middle East, to include the impact of his own personal religiosity, and his belief that Washington’s proper role in the region is to act as “a force for good.” The extent to which the Secretary of State was speaking for himself was not completely clear, but the text of the presentation was posted on the State Department website without any qualification, so one has to assume that Pompeo was representing White House policy.

Pompeo immediately set the stage for what was to follow, asserting in his first several paragraphs that “This trip is especially meaningful for me as an evangelical Christian… In my office, I keep a Bible open on my desk to remind me of God and His Word, and The Truth. And it’s the truth, lower-case ‘t,’ that I’m here to talk about today. It is a truth that isn’t often spoken in this part of the world, but because I’m a military man by training, I’ll be very blunt and direct today: America is a force for good in the Middle East.”

Pompeo and Vice President Mike Pence are quite likely the two most prominent Evangelical Christians in the Donald Trump Administration. Further, the two are Christian Zionists, which means that the return of the Jews to the Middle East is an essential precursor component of their belief that certain steps must be taken to bring about the second coming of Christ. Some Christian Zionists believe that the second coming is imminent, but whether or not that is true of Pence and Pompeo, they nevertheless share the conviction that the state of Israel must be protected at all costs, a view that certainly shapes their policy recommendations regarding the Middle East. And that view also has an impact on policy towards Israel’s neighbors, with Iran in particular being vilified as the purely evil foe, a “cancerous influence,” that will be destroyed in the great battle of Armageddon which will lead to the second coming and the rapture of all good Christians into Heaven.

Beyond that, Pompeo sought in his speech to disparage the Middle Eastern policy of Donald Trump’s predecessor Barack Obama and to make clear that something fresh and exciting has arrived in its place. He said that the United States had been “absent too much” to help friends in the Middle East. “Why? Because our leaders gravely misread our history, and your historical moment. These fundamental misunderstandings, set forth in this city in 2009, adversely affected the lives of hundreds of millions of people in Egypt and all across the region. Remember: It was here, here in this city, that another American stood before you. He told you that radical Islamist terrorism does not stem from an ideology. He told you that 9/11 led my country to abandon its ideals, particularly in the Middle East. He told you that the United States and the Muslim world needed, quote, ‘a new beginning,’ end of quote. The results of these misjudgments have been dire.”

Along the way Pompeo trots out a lot of half-truths and even completely fabricated lies, saying that America’s “timidity” had let to the rise of ISIS, had enabled Iran’s government to crush the “Green Revolution,” had freed Tehran to interfere all over the region, had allowed Hezbollah to accumulate a massive arsenal to threaten Israel, and had permitted Bashar al-Assad to kill his own people with chemical weapons. And worst of all, there was a false desire for peace that led to “a [nuclear] deal with Iran, our common enemy.”

Pompeo concludes from the record of calamities that “So today, what did we learn from all of this? We learned that when America retreats, chaos often follows. When we neglect our friends, resentment builds. And when we partner with enemies, they advance… The good news is this: The age of self-inflicted American shame is over, and so are the policies that produced so much needless suffering. Now comes the real new beginning. In just 24 months, actually less than two years, the United States under President Trump has reasserted its traditional role as a force for good in this region.”

Apart from the histrionics, the speech was clearly intended to deliver a simple political message to the audience and particularly to the Egyptian and Gulf governments. By asserting a “force for good” mandate, Pompeo was actually telling all the autocratic regimes in the Middle East that they can do whatever they want as long as they hate Iran.

To be sure, Pompeo’s speech contained a number of lines that might be considered attempts at humor given the absurdity of some of the claims being made. He said “For those who fret about the use of American power, remember this: America has always been, and always will be, a liberating force, not an occupying power. We’ve never dreamed of domination in the Middle East. Can you say the same about Iran?” Actually, you could say exactly that about Iran, which hasn’t occupied anyone since the seventeenth century. It is the US that has land, sea and air power based all over the region while also fighting wars in Afghanistan, Iraq and Syria. It is America’s best friend and ally Israel that is occupying Palestine.

But the best line was towards the end, “And in Yemen, we will continue to work for a lasting peace. And I think this is clear, but it is worth reiterating: The United States fully supports Israel’s right to defend itself against the Iranian regime’s aggressive adventurism. We will continue to ensure that Israel has the military capacity to do so decisively.”

As Yemen is achieving peace through American bombs supplied to the Saudis while “ally” Israel is the most persistent aggressor in the Middle East second only to Washington, it is ludicrous to think that America in some way has become a “force for good.” Tell that to the Libyans whose prosperous state was reduced to anarchy by American bombing and support of terrorist groups. Visit Fallujah or Raqqa, or what’s left of them. US forces and sanctions have killed 1.7 million Iraqi civilians, including 500,000 children. By one estimate, as many as 4 million Muslims have died as a direct or indirect consequence of America’s wars in Asia since 1990. US ally Saudi Arabia meanwhile bombs Yemeni schools, buses, and hospitals, starving children as part of a major humanitarian catastrophe, while Israel attacks Syria nearly on a daily basis.

It should be terrifying to learn that Mike Pompeo has an open Bible on his desk, particularly as he seems disinclined to read the New Testament part with its message of love and forgiveness. Now the White House appears to be entering into a new America as a “force for good” phase that relies on naked aggression and collective punishment for those who do not choose to submit. And, per Pompeo, God is on our side.