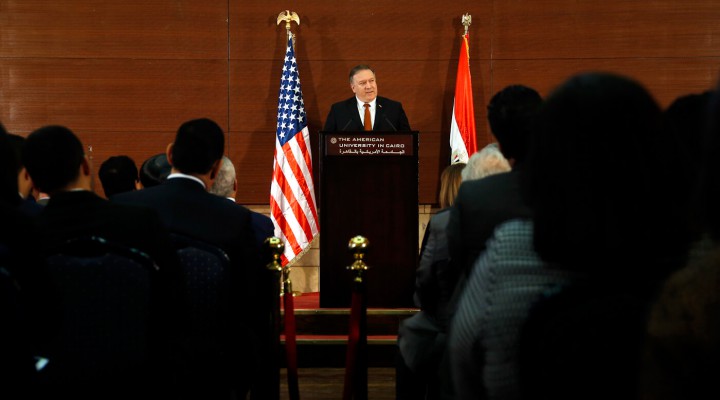 Pompeo’s speech seems to have been a not-so-subtle means of putting the entire Mideast region and world on notice that the U.S. is poised to initiate a new era of military intervention in the Middle East in order to “liberate” nations that continue to resist U.S. influence and regional hegemony.

During a speech given Thursday at Cairo’s American University, U.S. Secretary of State Mike Pompeo delivered remarks that some analysts have likened to a mix of evangelism and historical revisionism regarding the U.S.’ historical role in Middle Eastern and Northern African affairs.

Pompeo began his speech by stating:

It’s the truth, lower-case ‘t’, that I’m here to talk about today. It is a truth that isn’t often spoken in this part of the world, but because I’m a military man by training, I’ll be very blunt and direct today: America is a force for good in the Middle East.”

Prior to his speech, at an earlier press conference, Pompeo made a similarly jarring characterization of U.S. involvement in the Middle East, stating:

America has always been a liberating force, not an occupying power, in the Middle East. We’ve never dreamed of domination.”

As he continued his presentation, Pompeo made several other remarks that painted America as saviors of the Middle East, despite the country’s role in recent wars in the region that have caused tremendous suffering and loss of life. In defiance of the U.S.’ Mideast track record, Pompeo asserted:

We’ve never dreamed of domination in the Middle East. Can you say the same about Iran?”

Watch | Mike Pompeo’s Cairo speech praising the U.S. as a “force for good” in the Middle East

To illustrate Pompeo’s revisionist take on U.S.-Mideast relations, the last time Iran invaded another country was 1798 while the U.S. — since 2001 — has invaded and occupied Iraq, continues to occupy Afghanistan, helped foment the Syrian conflict by arming terrorist groups, supports and arms the Saudi-led coalition in Yemen, and helped overthrow the government of Libya.

In keeping with his framing of the U.S.’ “innate good” early on in his remarks, Pompeo offered a very selective list of American “successes” in the Middle East, a list that omitted any mention of the U.S. invasion of Iraq and Afghanistan or the U.S.-supported overthrow of Libya:

In World War II, American GIs helped free North Africa from Nazi occupation. Fifty years later, we assembled a coalition to liberate Kuwait from Saddam Hussein. Would the Russians or Chinese come to your rescue in the same way, the way that we have?”

Even more troubling than his revisionist take on the U.S.’ recent past in Middle Eastern and North African affairs, Pompeo asserted that U.S. military occupation was a guard against chaos and that the region only suffered when “neglected” by the American military:

We learned that when America retreats, chaos often follows. When we neglect our friends, resentment builds. And when we partner with enemies, they advance.”

Pompeo then rather ominously stated:

The age of self-inflicted American shame is over, and so are the policies that produced so much needless suffering. Now comes the real new beginning.”

In other words, the “shame” around the U.S.’ forever wars and history of military intervention — both covert and overt — in the Middle East “is over” in Pompeo’s eyes, providing a “real new beginning” that heralds the return of the U.S. as “liberators” to the Middle East.

Iran, the undeniable target of the apparently soon-to-arrive wave of U.S. interventionism promised in Pompeo’s recent speech, wasted no time in firing back at Pompeo’s assertion that the U.S. is a “force for good” in one of the world’s most geopolitically important regions. Following Pompeo’s assertion that “when America retreats, chaos often follows,” Iranian Foreign Minister Mohammad Javad Zarif countered on Twitter that “Whenever/wherever US interferes, chaos, repression, and resentment follow.”

Whenever/wherever US interferes, chaos, repression & resentment follow. The day Iran mimics US clients & @SecPompeo‘s “human rights models”—be it the Shah or current butchers—to become a “normal” country is the day hell freezes over. Best for the US to just get over loss of Iran.

1,015 people are talking about this

Indeed, Zarif’s characterization of the effects of American foreign policy seems much more in line with reality. For instance, nearly eight years after the U.S.-backed “liberation” of Libya, the country is still wracked by chaos, given its continuing lack a central government and its transformation from the African country with the highest standard of living (prior to the U.S.-backed overthrow) to a hub of terrorist activity, a massive illegal weapons trade and a burgeoning human slave market.

Another clear example is Iraq, which the U.S. invaded in 2003 and then occupied. Over a million people lost their lives and, though it is rarely mentioned in American media, thousands of Iraqi children have been born with horrific deformities in cities like Fallujah as a direct consequence of U.S. military operations that took place during the invasion.

Similar stories of “chaos, repression and resentment,” as Zarif called it, can be found in countries such as Syria, where the U.S. armed terrorist groups in hopes of toppling that country’s government; and Yemen. In that long-tortured nation, the U.S. is currently arming and aiding Saudi Arabia and the United Arab Emirates to wage a war against Yemeni civilians that has put nearly two-thirds of Yemen’s entire population at risk of death from starvation, disease or the Saudi-led coalition’s bombing campaign.

Pompeo’s conscious decision to create a parallel history of U.S. intervention in the region with little basis in fact was unlikely done with the intention of fooling listeners into actually believing this account of historical events. Instead, it seems to have been a not-so-subtle means of putting the entire region and world on notice that the U.S. is poised to initiate a new era of military intervention in the Middle East in order to “liberate” nations that continue to resist U.S. influence and regional hegemony.