HOME / WORLD / Israel teaches hate, and the “Sword of Jerusalem” became the Guardian of Palestine 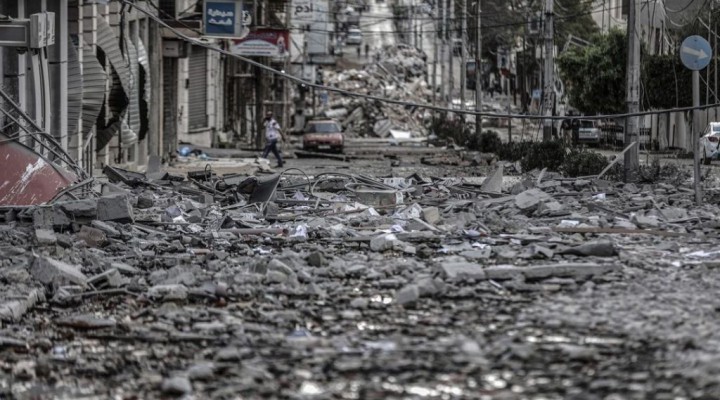 The battle of Gaza is over, for now, following an unconditional cease-fire unilaterally declared by Israel and approved by the Palestinian group resistance. At 02:00 local time this morning Friday the 21st of May, and following intensive negotiation where the US, Egypt and Qatar were involved, the Israeli army stopped the indiscriminate killing by “wiping out entire Palestinian families on purpose” and destroying Gaza’s infrastructures and homes. Moreover, Israel agreed to stop expelling the inhabitants of Sheikh Jarrah in Jerusalem. The Palestinian resistance groups agreed on the cease-fire but vowed to keep missiles ready if Israel breaks the deal. The most important result of this battle comes from Syria, whose president Bashar al-Assad reopened its doors to Hamas that contributed to the killing of Syrian citizens and army when many of its members were engaged alongside the Takfiri during the last ten years of war.

The Israeli bombing of Gaza civilians and infrastructure has reached a war crime level that the world has, so far, not condemned. This is not the first time Israel carried out wars and battles against Lebanon, Syria and Gaza. Hating or killing Arabs is part of its doctrine.

The world expressed anger at the Takfiri terrorist organisation, the “Islamic State” (ISIS-Daesh) and Saudi Arabia for their radical teaching. This teaching follows Sheikh Ibyn Taymiyyeh and Sheikh Mohamad Abdel’ Wahhab radical doctrine and promotes the death or enslavement of other Muslim sects and non-Muslim religions. The West considered that extremist Islamic teaching curricula are a language of hatred, an incitement for killing other human beings, and should be removed or fundamentally altered. But what does Israel teach its children? It is no better. The world needs to be aware of the Israeli school curriculum and its toxic content

The answers to these questions were shown an Israeli tape in which the following dialogue took place:

Teacher: Where is Solomon’s temple located?

Students: in Al-Aqsa Mosque, and there we will build it in years to come.

Teacher: What will happen to Al-Aqsa Mosque?

Students: It will collapse, it will explode, it will disappear.

Teacher: If you met an Arab boy, what would you feel?

Students: A desire to kill him.

Teacher: What do you think will happen in Jerusalem ten years from today?

Students: the entire population will become of the Jewish religion.

The teacher: And what will become the fate of the Arabs there?

Students: will become our slaves, or there will be a battle in which all Arabs will be killed.

This is what is taught in the elementary classes in Israel. It is an education for murder, hatred, the enslavement of Arabs and destruction of the holy Al-Aqsa Mosque, currently the eye of the storm. Excavations under Al-Aqsa began after the 1967 war when Harat Al-Maghariba(the 770-year-old Moroccan Quarter) adjacent to the Al-Buraq Wall was demolished from the western side of the mosque to be an entrance for the Zionist soldiers and settlers to its squares. Since then, Israel has not stopped searching for a “Solomon Temple“, an excuse to seize one of the most important religious sites for Muslims. Israel has succeeded in undermining the foundations of the Al-Aqsa Mosque. Significant cracks have occurred in the southern wall of Al-Aqsa due to the continuous excavations under the Al-Buraq Wall. Israel is accused of injecting chemical substances into the walls of the mosque to cause its corrosion. The damage to al-Aqsa started following the opening in 2006 of a new hall for Jewish worshippers in Al-Buraq Square under the Islamic Courts building to link the Herodian road extending from the bottom of the Al-Buraq Wall to the suburb of Silwan, south of Al-Aqsa Mosque.

The Gaza war that recently broke out was due to the Palestinian militants’ awareness of the Zionist officials’ intention to Judaize Jerusalem and expel all Arab residents from the city. Israel began its campaign in the Sheikh Jarrah neighbourhood in Jerusalem to forcibly displace Arabs from their land and to settle a Zionist population in their place. The Palestinian resistance groups (mainly Hamas and the Islamic Jihad) in Gaza decided to issue an ultimatum to Israel to prevent it from deporting Arabs and Muslims from Jerusalem. Former US President Donald Trump unlawfully offered the city as a gift to his friend, Israeli Prime Minister Benjamin Netanyahu. Hence, Israel’s goal was (and still is) to seize Jerusalem, heading in later years towards the West Bank in subsequent steps.

Israel will not be deterred from its goals but must rather postpone its plans to occupy Jerusalem for another term. Consequently, Gaza’s decision to link the cease-fire agreement – despite the heavy human and material losses – with the protection of the Palestinian inhabitants of Jerusalem is a decision that stems from the will to defend the holy city and the Arab population.

The Arab Palestinian people in Gaza seemed ready to accept the losses they suffered from this battle and future battles, a price considered by the Palestinians worthy for defending what remains of Palestine. Israel would like to isolate Gaza City and leave it to the Palestinians because it overflows with a population (1.7 million inhabitants in 368 sq km). Therefore, Israel does not want to bear the burden of controlling Gaza and taking care of its residents rather than occupying Gaza, a plan that may take at least tens of years and cause huge losses.

The Gaza war, which broke out about ten days ago, is the first of a series of future conflicts in which all Israeli cities will be under the rain of Palestinian missiles. Israel is developing its military capability. So is the resistance that targeted the far north and south and forced the Israeli residents and its political and military leaders to go to bomb shelters.

Gaza has achieved its goals, and accordingly, the “Sword of Jerusalem” will continue to impose itself on Israel after the end of this current war for many years to come and until the time for the next battle is due.

0 thoughts on “Israel teaches hate, and the “Sword of Jerusalem” became the Guardian of Palestine”