HOME / WORLD / Preparing the Stage: A Flawed Prospectus for War, This Time With Iran 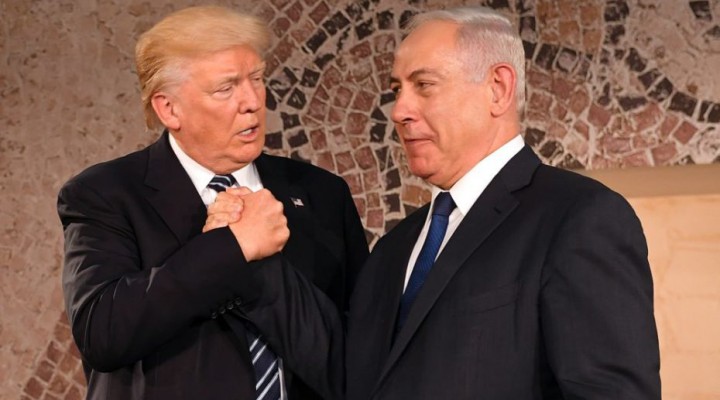 The new type of warfare is using economic pressure to trigger popular protest and then to leverage the economic grievances of the ordinary populace.

“This is a historic opportunity”, whispered one of Netanyahu’s insiders into Ben Caspit (a leading Israeli journalist)’s ear this week: “You have no idea what we can wheedle from the Americans now, what a golden opportunity we face when the US is about to enter an election year”.

“Bunker busters”, he mutters to Caspit, who elaborates that: “According to members of Netanyahu’s inner circle, these bombs will be given to Israel once it signs the mutual defence agreement that Netanyahu has been working on.” And though Israel’s security establishment historically have opposed a full pact, Caspit explains that the PM’s associates “are referring to a ‘partial’ defence pact focused on Iran alone.” Netanyahu’s associates insist that “the prime minister wants to make history in the next half year.” (Emphasis added)

What sort of history might that be? Why six months? Well, Caspit points up: “Netanyahu’s people, headed by minister Yuval Steinitz clearly state that a widespread war is likely to erupt in the next six months between Iran and its adversaries in the region, including Israel”. And the new Defence Minister, Bennett, threatens Iran on an almost daily basis.

“Perhaps Netanyahu simply needs a war with Iran in order to survive politically,” one of the Blue and White leaders told Caspit: “That is scary and dangerous …” .

Yet precisely such an Iran-focussed treaty was to be a key issue on the agenda of hurriedly-arranged talks with Secretary Pompeo, in Lisbon this week – a ‘summit’ that followed in the wake of a notable flock of very high-level, US Defence officials visiting Israel in recent days. In Lisbon, Netanyahu said that his talks with Pompeo had focused on: 1. Iran; 2. Iran, and number 3: Iran.

And in Washington? The Defence establishment is not echoing the Israeli call to early action (with Iran and its allies allegedly mired in wide protest), but they are fretting that Iran is not being sufficiently “deterred”.

And the US Defence Establishment is adding to the Iran hype coming from Netanyahu: “We continue to see indications … that potential Iranian aggression could occur,” John Rood, the Pentagon’s number-three official, said in the wake of a Defense Intelligence Agency report that warned that Tehran is producing “increasingly capable ballistic and cruise missiles” with better accuracy, lethality and range.

Is all this hyped ‘threat’ for real? Iran has been very explicit in saying the purpose to its calibrated push-back is ‘pressure’: i.e. a counter-pressure to force the US to re-think its economic siege policy. That is perfectly understandable, is it not? Or, is this hype just Netanyahu politicking in the lead-up to a possible third round of elections in Israel in the New Year that could see him ousted from power and heading to gaol?

The latter explanation is possible, but events suggest that Netanyahu truly does want to seal his legacy by persuading the US to join with Israel in an attack on Iran. That is a real risk, too.

And if so, again (as in 2003), such an event again will be sold to the US and European public on an entirely false prospectus.

And what is that? Well, here it is: “For a long time it looked like the spread of Iranian influence across the Middle East was unstoppable. Now, the entire Iran-hegemony enterprise is at risk. Protests have been going on in Iraq and Lebanon for weeks, bringing their economies to a near standstill, and forcing their Iran-approved prime ministers to step down. There’s no end in sight to the protests …”.

And hence, the Israeli push – led by the newly-appointed Defence Minister, Bennet, that now – precisely – is the moment for the US to act against Iran. This is the narrative for war.

Certainly, a stage is being set around this narrative: the US is engaged in an epic arm-wrestle with Iran over whom will have the primacy of influence in Iraq. The US and its European allies, too, are holding Lebanon’s economy hostage to a resolution of a financial crisis (aggravated by the deliberate draining of US dollar liquidity from Lebanon to New York), against a US demand for a scission between President Aoun’s Christian party and Hizbullah – an alliance which effectively controls parliament in Beirut, and additionally, that demand that Lebanon concede its position over the East Mediterranean oil and gas demarcation – to Israel.

And, in Syria, US forces are trying to use the Syrian Kurds to block connective links between Iran and Iraq (tightening the economic siege), whilst Israel attacks Iranian infrastructure there, from the air.

In short, we are dealing with New Generation warfare: maximum economic pressure (and siege), to trigger popular protest, and then to leverage these genuine economic grievances suffered by the ordinary populace, through inserting small, trained elements to seed ‘messages’ – and to resort to calibrated violence against symbols of the state (in order to seize media attention) – should popular protests flag, and require reviving.

On the other hand – in what may also be understood as an ‘other’ aspect to a ‘preparing of the stage’, Israel is at work to pacify Gaza (with Gulf cash); and the US is active with the Houthis in trying to tamp down the war with Saudi Arabia: i.e. de-conflicting other potential war fronts.

The economic and governance problems in Iraq and Lebanon are real (and profound) – and they do, to a degree, impinge on Iran’s room for manoeuvre. So, what then, is the ‘false prospectus’?

It lies with the protests in Iran – and the ‘message’ being promoted by the main-stream media which has the “regime” teetering at the brink of collapse, and obliged to use unprecedented violence to quell mass unarmed protests, in the wake of an extraordinarily ineptly managed, fuel-price hike.

What is wrong with this version? Well, what is right is that the hike triggered protests across 100 cities on the Friday, 15 November. The protests were widespread, and the poorer segments of the population (traditional supporters of the state) were heavily represented. But they were not violent.

The rest of the narrative is wrong.

On the day of the truly mass protests against the fuel hike, no one was killed. And, on the following day, the protestors almost wholly vanished from the streets. Instead, small groups of pre-prepared, armed and violent activists – not protestors – attacked the strategic hubs of state infrastructure: banks, petro-chemical plants, the gas network, and fuel storage. These hubs were attacked using rocket-propelled grenades (RPGs) and sub-machine guns. Other groups took out banks (100s of them), armed with guns, swords and iron bars. (One of these latter groups attacked six banks in the space of just one hour.) Nothing here was spontaneous or ‘populist’.

The security forces reacted militarily – arresting and killing many insurgents. And yes – the internet was shut down. But, not the internal Iranian internet – only the global internet. So, the Iranian equivalent of WhatsApp and Telegraph, and Iranian news channels were still accessible – though the global internet was not. The overseas anger at the external internet shut-down possibly reflected surprise and irritation that Iran had this capability. Likely, it was not a capacity that Iran was thought to possess.

So what was going on? The Iranian government, it seems, had prior knowledge of plans to stage attacks by ‘activists’, as a part of an (externally formulated and resourced) disruption plan. But that original plan indicated that the start of these actions would take place early next year.

What seems to have happened is that when the fuel hike protests began, these ‘activists’ were given the go-ahead to ‘seize the moment’. In other words, they activated all their pre-prepared plans prematurely. This was exactly what the Iranian security forces wanted, and had sought. It enabled them to ‘smoke out’ the plot, and to arrest, or kill the ring-leaders.

In other words, the Iranian government is not teetering at any ‘brink’ – and later internal Iranian polling shows popular anger directed principally towards the violent gangs, and to a lesser extent, towards the Rouhani Administration, for its mis-handling of the fuel-price hike – but not against the state, per se. The latter result is not so surprising as older Iranians will remember how the CIA used similar tactics – violent attacks on shops – to escalate the protests in the 1953 overthrow of PM Mosaddegh, in favour of strengthening the monarchical rule of the Shah.

Here is the question: Have the various instigators of these deliberate, violent attacks, ‘come clean’ about the failure of their plan – and of the unravelling (the arrests and disruption) of their Iranian ‘networks’ to President Trump? Or, is he being presented only with the Netanyahu ‘narrative’ of an Iran cornered ‘and at the brink’?

Iran is not at the brink; its economy is not imploding, and it has not – at least not yet – been cornered in the region. The arm-wrestling between the US and Iran in Iraq, Syria and Lebanon is engaged, but not over. It is not the moment for Israel ‘to count its chickens’ with respect to an imploding Iran.

The other question then, is with all this swelling max-pressure, financialised ‘war’ operations mounted by the US, Israel, and certain Gulf States, across the Middle East, is there a way out? Or, is it likely to end in war? The momentum, as matters stand, must be towards escalation. To avoid that disaster, one or other of the parties must row back.

One ‘off-ramp’ might be that whilst Trump (ignominiously) might be ready to contemplate the disruption, the distress and hardship being administered to the people of Lebanon, Iraq and Syria in the interests of weakening Iran, he may not want to proceed to that ultimate step of war.

US polls show no popular appetite for war with Iran. Yet climbing down from his Iran ‘tree’ for Trump, will not be easy. The other off-ramp might be that Netanyahu does not remain as PM for these vital, coming six months to ‘write history’ and seal his legacy. It would be both “scary and dangerous”, for sure, were Netanyahu (and close associates) to conclude that Netanyahu needs such a war to survive – as Ben Caspit was so clearly warned.

But what is not so likely, is that Iran buckles or implodes.

0 thoughts on “Preparing the Stage: A Flawed Prospectus for War, This Time With Iran”