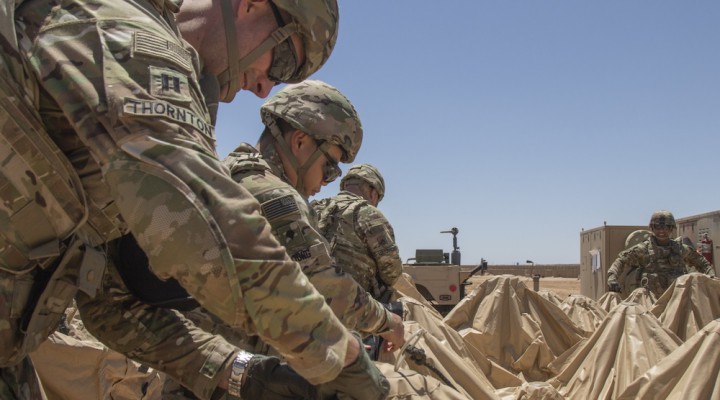 The defense secretary may deny the number, but an internal struggle over the Iran ‘threat’ suggests there will be deployments.

Secretary of Defense Mark Esper is denying reports that he is considering a proposal to increase the U.S. military presence in the Persian Gulf by as many as 14,000 additional troops. But the wording of the denial appears to suggest that dispatch of a smaller number of military personnel is still under consideration.

The Pentagon issued a statement on Friday quoting Esper as saying, “As the Department [of Defense] has stated repeatedly, we were never discussing or considering sending 14,000 additional troops to the Middle East. Reports of this are flat out wrong.”

The specificity of the denial focusing on the 14,000 total rather than ruling out any increase is a clue that Esper still has a significant increase in mind, which could involve additional ships as well as ground forces.

Further evidence of some sort of planned increase came during Congressional testimony Thursday by Undersecretary of Defense for Policy John Rood, whose answer to a question about a proposed troop increase was equivocal, leaving open the possibility of “dynamic adjustments to our posture” to deter Iran.

“We are evaluating the threat situation, and the secretary, if he chooses to, can make decisions to deploy additional forces based on what he’s observing there,” Rood said. “Based on what we’re seeing with our concerns with the threat picture, it is possible we would need to adjust our force posture.”

Esper’s Friday denial came in response to a story by TheWall Street Journal, which first reported the 14,000 figure on Wednesday. Later, after President Trump called the report “fake news,”CNN reported that the troop deployments could be much smaller, closer to 3,000 or 4,000, indicating that Rood may have put forward a range of possible options for Esper’s consideration.

The push to send significant troops or additional ships and military assets to the region has certainly encountered resistance from the Pentagon itself and in particular from the new Chairman of the Joint Chiefs of Staff, Gen. Mark Miley. He and other senior Pentagon officials would find the proposal problematic because it conflicts with the Pentagon’s shift from the Middle East to East Asia. Milley had articulated the primary arguments against such a move before before becoming JCS Chairman on September 30.

Rood and others supporting a further increase in U.S. presence in the region are arguing that it is necessary to “deter” Iran because of alleged new intelligence. “We’re concerned about the threat stream that we’re seeing,” he told the committee. The New York Timesreported December 4 a claim by U.S. intelligence and Pentagon sources that Iran has brought more short-range missiles into Iraq in recent months, increasing the Iranian threat to U.S. forces and interests in the region. That same day Rood told reporters that there were “indications…that potential Iranian aggression could occur.”

Iran had already deployed such missiles to Iraq, however, as early as 2018, and additional missiles are hardly surprising given the Israeli campaign to carry out bombing against any weapons that could be used to deter Israeli military action in the region, including Iraq.

Citing alleged new intelligence of an Iranian military threat was a tactic used by then-national security adviser John Bolton and his bureaucratic allies to justify the escalation of tensions with Iran last May. That earlier alleged intelligence included what turned out to be a misreading of an Iranian directive to be prepared for a possible U.S. military attack in the region.

The leading figure in the group calling for more troops today is Gen. Kenneth McKenzie, the commander of U.S. Central Command, responsible for the entire Middle East region. McKenzie was also one of the central actors in the group led by John Bolton that agreed last May on sending a squadron of 12 jet fighters, several spy planes a B-52 bomber task force, and the U.S.S. Abraham Lincoln aircraft carrier strike group to the Gulf.

McKenzie has the most direct personal and institutional stake in the proposed the U.S. buildup in the Middle East, all of which would come under his command. McKenzie was undoubtedly pleased with the idea that “dozens” of additional ships may be included in the proposal, as reported by The Wall Street Journal. In remarks to a security conference in Bahrain last month, he alluded with a hint of regret to the shift in U.S. military assets from the Middle East to the East Asia in recent years. He described the situation “not too many years ago” when the United States maintained a “near constant presence” in the Gulf, “with an aircraft carrier battle group in close proximity… .”

McKenzie then referred in broad language to the shift in U.S. military focus from the Middle East to East Asia. “[W]e have positioned strategic assets globally to provide capabilities and deterrence against multiple adversaries and threats,” he said. Then he referred to the marine security arrangement for the Strait of Hormuz involving Albania, Australia, Bahrain, Saudi Arabia, UAE and the UK, suggesting that it was not aimed at Iran but merely at freedom of navigation. What McKenzie did not mention is that the U.S. contribution to the coalition effort is limited to providing intelligence capabilities rather than warships—-a limitation that was presumably imposed on him by the White House.

McKenzie suggested ito reporters covering the conference that the United States should do more to deter Iran. “My judgment is that it is very possible [Iran] will attack again,” he declared. That warning evidently came before any claim of evidence of new Iranian missiles in Iraq, because McKenzie cited no specific evidence for his warning, except the September cruise missile and drone strike against the Saudi oil facilities.

Although McKenzie supported the idea of deterring Iran, he was much more precise  than Rood about what was to be deterred. Rood declared in remarks to the same conference in Manama that Iran’s intent is to “pursue a pattern of aggressive behavior that is destabilizing.” McKenzie said that Iran would be reacting to the administration’s “maximum pressure” strategy of trying to choke off Iran’s oil sales. “Iran is under extreme pressure,” McKenzie said, and it was trying to “crack the campaign” with attacks aimed at provoking an American military response.

Changes in both senior positions in the Trump administration and the broader political situation since the pivotal May 2019 decisions have shifted the balance against those pushing for more U.S. military power in a potential theater of war. The third major figure who supported the May decisions, along with Bolton and McKenzie, was Chairman of Joint Chiefs of Staff General Joseph Dunford. He later supported Trump’s decision not to retaliate over the shoot-down of the U.S. drone in June, however, and he was replaced on September 30 by Gen. Mark Milley, who is not likely to support the new proposal for troop escalation.

In his confirmation hearing in July, Milley was vocal in warning against war with Iran, on the ground that it would disrupt and the strategic shift by the Pentagon from dominant emphasis on the Middle East to a primary focus on “great power competition” with Russia and China. The Wall Street Journal cited Pentagon sourcesas confirming that the United States currently has only five aircraft carriers—not enough to deal simultaneously with Russia, China and the Middle East.

Miley sought to distinguish between a single-strike against Iran such as the one that Trump decided on and then canceled in June, and a broader conflict. He and  experienced senior military officers like him are highly skeptical about being able to control a conflict with Iran once it begins. As former CENTCOM commander Gen. Joseph Votel recently told an interviewer, the idea that a war with Iran could be carefully limited to a single strike is “preposterous.”

The latest suggestion that the United States is gearing up for a confrontation with Iran comes after the political atmosphere for such a policy has already started to cool. Although the hardliners accuse Trump of betraying American interests by failing to use force against Iran over its alleged attack on Saudi oil facilities, more of the political and media elite now understand that Iran is far more capable of striking U.S. troops and facilities in the region than a decade ago, as the Pentagon’s own analysis implies.

The reality that military a confrontation with Iran would be very unpopular is more widely understood today. Certainly Trump himself has become much clearer about that, even if he does not understand that his “maximum pressure” policy risks precisely that outcome. Trump is even less likely to risk another symbolic step toward military confrontation with Iran as he seeks to consolidate his political base going into an impeachment struggle and a presidential election year.

Nevertheless, Esper may still propose to the White House sending a smaller number of troops and or other military assets to the Persian Gulf, forcing Trump to make a decision he would probably rather avoid.

Cornering and Strangulating Iran Has Backfired on Israel