HOME / SOCIAL/CULTURAL / To Prove China is a “Global Threat,” US Threatens Global Games 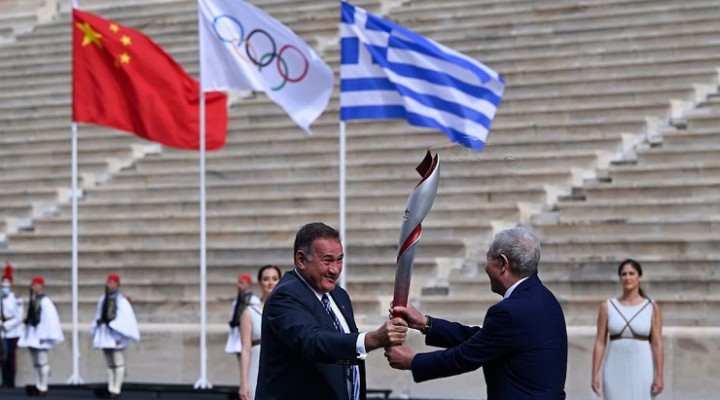 China is set to host the 2022 Winter Olympics in its capital city Beijing beginning in February. The country has been busy with preparations taking into consideration all the baseline concerns required for such an event with the addition of managing risks related to COVID-19.

However, the event stands to benefit China in many ways including showcasing modern China in front of the entire world, portraying a China in stark contrast to the dreary propaganda churned out en masse by the Western media.

Knowing what sort of opportunity this is for Beijing, however, the West has mobilized its propaganda campaign to peak performance to transform this opportunity into a liability – a chance for the West to provoke or humiliate China on the global stage.

The torch-lighting ceremony in Athens, Greece provided a sneak peak at the sort of tacts the West plans on using from now until the Olympics conclude in Beijing in late February.

Activists grabbed the spotlight at the flame-lighting ceremony for the 2022 Beijing Winter Olympics in Greece on Monday by unfurling a Tibetan flag and a banner that said “no genocide” at the Games.

The same article would also report:

Pro-Tibet activists, as well as representatives of China’s Uyghur community and human rights experts, are scheduled to hold a press conference in an Athens hotel on Tuesday.

All three are funded by the US government through the National Endowment for Democracy (NED). All three are ostensibly human rights groups, but upon closer examination of each of their respective official websites, they are actually separatist organizations.

Students for a Free Tibet – in name alone – indicates its separatist agenda. On its official website under “About,” they openly admit:

Students for a Free Tibet (SFT) works in solidarity with the Tibetan people in their struggle for freedom and independence.

Likewise, the International Tibet Network claims on its website that:

Network members are committed to non-violence as a fundamental principle of the Tibetan struggle. They regard Tibet as an occupied country and recognise the Tibetan Government in Exile as the sole legitimate government of the Tibetan people.

The World Uyghur Congress, whose NED funding is featured on an NED page titled, “Xinjiang/East Turkestan” – East Turkestan referencing what Uyghur separatists refer to China’s Xinjiang region as, claims on their official website that they are an opposition movement “against Chinese occupation of East Turkistan.”

In essence – the Beijing 2022 torch-lighting ceremony was disrupted by separatist organizations funded by the US government in direct violation of international law and specifically the UN Charter in regards to compromising the territorial integrity of another sovereign state.

A second incident also occurred in Athens, carried out by 2 US citizens – Tsela Zoksang and Joey Siu, according to AP.

Joey Siu is probably best remembered for her interview with DW’s Conflict Zone in 2019 where she attempted to defend violence carried out by Hong Kong rioters. She categorically refused to condemn the violence, including attacks on ordinary people for simply thinking differently.

These same groups, along with many others funded and supported by the US government and its many allies – using the smokescreen of human rights advocacy while in reality guilty of many abuses themselves – will continue their attempts to undermine the Olympic Games in Beijing early next year.

Among other known propaganda campaigns deliberately coinciding with Beijing 2022 is the so-called Uyghur Tribunal.

The tribunal was initiated, funded, and staffed by the above-mentioned World Uyghur Congress and several other US NED-funded Uyghur separatist organizations. It plans on releasing its non-legally binding “ruling” in December, allowing the following Western media storm to reach its apex just ahead of the opening ceremony in Beijing.

The ultimate irony is that while the US insists that China is a threat to global peace and stability, representing the greatest threat to the international community today – it is precisely Washington’s fear that the Beijing 2022 Olympics will serve as a showcase contradicting and laying to rest that very claim which drives its otherwise dishonest and disruptive propaganda campaign aimed at Beijing.

It will be US-backed agitators and separatists pursuing agendas in violation of international law working to create chaos from the torch-lighting ceremony in October 2021 to the closing ceremony in February 2022, in an attempt to derail the international sporting event altogether – and not just for China – but for the rest of the world as well.

0 thoughts on “To Prove China is a “Global Threat,” US Threatens Global Games”