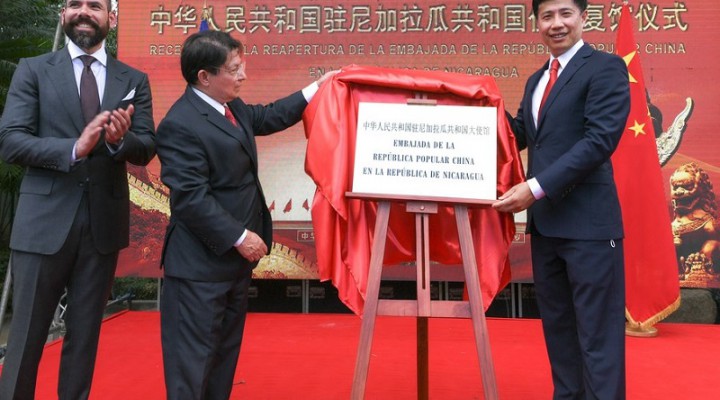 Recognizing Taipei isn’t an insurance policy against US meddling; it’s a guarantee that US meddling will become institutionalized to the detriment of that country’s people. Those governments who begin practicing comparatively more independent policies risk being punished despite still recognizing Taipei exactly as Nicaragua’s recently was.

China reopened its embassy in Nicaragua on New Year’s Day after it was closed for over thirty years since 1990 following that country’s mistaken recognition at the time of the Taiwan Province’s rogue authorities. This move follows Managua’s pragmatic decision last month to reverse that decision, which was undertaken after realizing that its prior policy was completely counterproductive. There are some lessons to be learned from this development, which will be explained in the present piece.

First, Nicaragua broke with Beijing in 1990 after the US succeeded in orchestrating a superficially democratic regime change in that formerly war-torn country. For background, Washington armed anti-government fighters popularly called “contras” and even broke its own laws by doing so during the infamous Iran-Contra scandal of the 1980s. The US-provoked conflict, which was more of an externally waged hybrid war than the civil war that some claimed, influenced Nicaragua’s electoral processes.

Recognizing Taipei was clearly a favor to that new government’s US patrons, but it didn’t result in any benefits for the Central American nation. It remained the hemisphere’s second-poorest country behind Haiti even though it obtained access to the US marketplace through the Dominican Republic-Central American Free Trade Agreement (CAFTA-DR). Quite clearly, after removing former President Daniel Ortega and ruining Nicaragua’s relations with China, the US didn’t care about Nicaragua anymore.

It got what it wanted, which was to destroy a socialist state during the height of Cold War proxy warfare across the Global South. Nicaragua was then intended to perpetually serve as the US’ latest regional vassal state and thus once again be completely exploited by its transnational corporations like during decades past. President Ortega nevertheless succeeded in returning to power in 2007 where he’s since remained but he didn’t reverse his predecessors’ decision to recognize Taipei until only last month.

It was predictable that doing so would provoke the US’ wrath, which might be why he decided to bide his time in order to avoid doing anything which could serve as a pretext for Nicaragua’s northern neighbor to wage another hybrid war against it. Even so, this policy didn’t achieve its presumable objective of ensuring that country’s security. The US began making wild allegations about President Ortega, his family, and close associates a few years ago in an attempt to rile up anger against them.

This was obviously the opening stage of its ongoing pressure campaign against that country, which was triggered by President Ortega’s increasingly independent foreign policy, including his pragmatic comprehensive cultivation of strategic ties with Russia. US officials began intimating that he’d become a target of regime change if he didn’t change his ways or consider stepping down. Despite that being the case, President Ortega doubled down on his policies, especially his left-wing socio-economic ones.

The US attempted to meddle in Nicaragua’s latest elections but to no avail. All that it managed to do was wage an unconvincing information warfare campaign against the country and impose more illegal sanctions against it. That was presumably the last straw for President Ortega, who might have realized by then that there’s no point in delaying his country’s long-overdue recognition of Beijing. After all, the US was already waging hybrid war against Nicaragua so remaining tied to Taipei served no purpose.

That’s precisely the point to draw attention to because there’s this false notion that the handful of countries that still mistakenly recognize Taipei are deriving some sort of strategic advantage by doing so, including by ensuring their security from the US’ retributive wrath if they eventually reversed their decision. Nicaragua’s case proves that this is nothing but a fallacy. That country was still targeted by the US’ hybrid war despite remaining one of the holdouts that continued to recognize Taipei till last month.

It received nothing of benefit in return. If anything, the country remained extremely underdeveloped because the US took it for granted as a vassal state and didn’t care to properly invest in it as a reward for recognizing Taipei. Practically all of those who still recognize Taipei are similarly impoverished and incapable of practicing independent policies due to the US’ hegemonic tutelage over their governments. They’ve gained nothing but lost their sovereignty and developmental potential in the process.

Recognizing Taipei isn’t an insurance policy against US meddling; it’s a guarantee that US meddling will become institutionalized to the detriment of that country’s people. Those governments who begin practicing comparatively more independent policies risk being punished despite still recognizing Taipei exactly as Nicaragua’s recently was. This means that it’s better for those leaders like President Ortega who have their people’s best interests in mind to recognize Beijing sooner than later instead of waiting.

If the US is ultimately going to destabilize them anyhow, then they should take the US by surprise in recognizing Beijing without Washington having time to prepare its hybrid war punishment against them in advance. Nicaragua therefore serves as a brave example to those remaining holdouts who will inevitably end up recognizing Beijing over Taipei in accordance with the irreversible course of history. They should learn the lessons from its latest experience and thus recognize Beijing sooner than later.