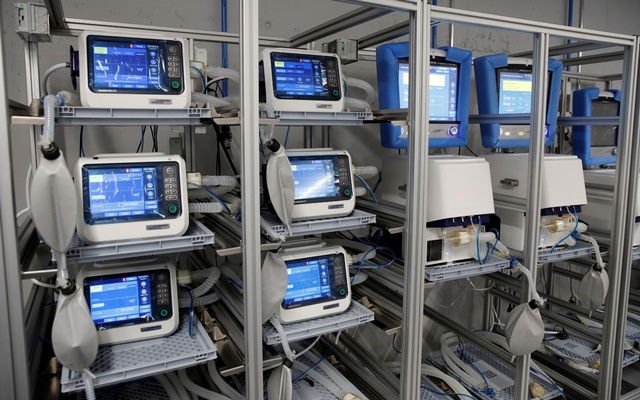 How big-business stopped cheap ventilators from making it to market, leaving nations vulnerable for over a decade to crisis shortages.

When coronavirus disease 2019 (Covid-19) began dominating headlines, it was accompanied by fears of potential shortages of critical medical equipment including personal protective equipment (PPE) and ventilators.

Nations like Russia had large stockpiles of affordable ventilators on hand – so many that they were able to send them overseas to nations at risk of shortages.

One of those nations included the United States.

The State Department said that following the call between the two leaders, the United States “has agreed to purchase” needed medical supplies, including ventilators and personal protection equipment, from Russia and that they were handed over to the Federal Emergency Management Agency on Wednesday in New York City.

As generous and impressive as Russia’s response was – the real question was – why was it necessary in the first place?

America’s Ventilator Shortage: Known for Over a Decade

While many may believe America’s ventilator shortage was a result of being blindsided by the speed Covid-19 spread, the truth is America’s shortage was know for at least a decade.

A 2010 MIT student project would set out to design a cheap, easily manufactured, and portable ventilator to address the shortage. The project paper titled, “Design and Prototyping of a Low-cost Portable Mechanical Ventilator” (.pdf)), would note:

The New York Times would also note just how long the shortage of ventilators in the US loomed in an article titled, “The U.S. Tried to Build a New Fleet of Ventilators. The Mission Failed,” which reported:

Thirteen years ago, a group of U.S. public health officials came up with a plan to address what they regarded as one of the medical system’s crucial vulnerabilities: a shortage of ventilators.

The breathing-assistance machines tended to be bulky, expensive and limited in number. The plan was to build a large fleet of inexpensive portable devices to deploy in a flu pandemic or another crisis.

The NYT article explains that the plan fell apart – specifically because the company that was eventually contracted to build the fleet of inexpensive, portable ventilators was bought out by a multi-billion dollar medical device manufacturer.

It is only 30 paragraphs into the NYT article that the company is named – Covidien. After the buy out, Covidien not only demanded more money to develop the ventilator, but also demanded a higher price for them once developed. They also reassigned staff working on the project, essentially shelving the effort. The motivation was simple – the company already sold much more expensive ventilators whose market position would be threatened by the development and deployment of cheaper alternatives.

Many more paragraphs later it is reported that Covidien has since been acquired by Medtronic – a US company based overseas to avoid paying US taxes and which made headlines recently when it waffled on releasing the designs of its ventilator to help aid in the shortages the company it acquired helped precipitate in the first place.

What emerges is a story of systematic corruption, monopolization, profiteering, and indifference by not a single company – but an entire industry – indifference to the actual purpose of human healthcare which is preserving human health.

The highjacking of human healthcare in the United States profit-driven corporations not only created an easily remedied ventilator shortage, but did so to the extent of leaving the US at the mercy of supposed “enemies” like Russia.

While Washington’s current adversarial footing with Russia is based on perpetuating American hegemony rather than any actual threat Russia poses, the fact that the greed of American corporations driving US foreign policy has in this case undermined US objectives and its leverage against Moscow helps illustrate how America’s current power structure is its own worst enemy.

For the average American the problem of national healthcare being highjacked by greedy corporations leaving them at the mercy of unaccessible, overpriced, and often ineffective medication and medical equipment is obvious and immediate. Growing numbers of Americans are investing their time and energy into opensource alternatives which – while unlikely to solve immediate problems – is creating an ecosystem of innovation that may eventually help replace existing monopolies.

For those invested in American hegemony – the fact that it is demonstrably unsustainable and often counterproductive should encourage serious rethinking.

For nations abroad targeted by American special interests, using alternative media to raise awareness of cheaper and more effective alternatives – helping Americans understand that the current state of US healthcare is neither tolerable nor necessary – will help undermine these corrosive special interests and make room for more honest and productive interests – interests that will better serve the American people and better serve America’s relationship with the rest of the world.

0 thoughts on “Holding Healthcare Hostage: The Making of a Ventilator Crisis”