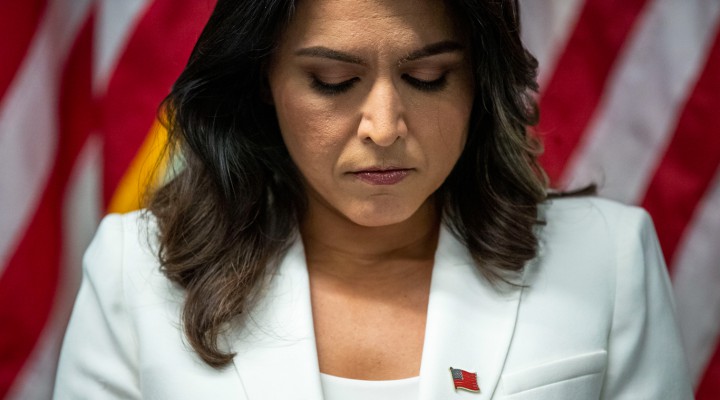 Gabbard’s decision had much more to do with a desire to censure Trump over his real crimes: carrying out wars without congressional approval, illegally “occupying and pillaging” Syria, “ and continuing to support Saudi Arabia’s “genocidal war” in Yemen.

MPN– A long strongly partisan lines, the Democrat-controlled House of Representatives voted to impeach President Donald Trump on two articles, by a total of 230-197-1 on abuse of power and 229-198-1 on obstruction of Congress. The first stems from his alleged pressuring of the Ukranian government to announce investigations into his political rival, Joe Biden. The second is because of his alleged refusal to cooperate with the investigation, withholding evidence and barring aides from testifying. The notable “1” in both counts was Hawaii Congresswoman Tulsi Gabbard, who, instead of siding with the overwhelming majority of her fellow Democrats, voted “present” both times.

Gabbard, who is currently running for the Democratic presidential nomination, was roundly criticized by her party for the decision. “I really think it was not a smart choice for her politically,” said Rep. Pramila Jayapal (D–WA), “If she can’t make a decision about whether to vote yes or no on these articles of impeachment, I’m not sure how she intends to make those decisions in the White House.” Jayapal added that she was very disappointed and considered Gabbard’s stance a “cop out.” “These votes are votes of courage, they are votes of conscience…I don’t think people are looking for a ‘present’ vote at the moment,” she concluded.

Freshman New York Congresswoman Alexandria Ocasio-Cortez also expressed her unease with Gabbard’s decision. “Today was very consequential. And to not take a stand one way or another in a day of such grave consequence to this country is quite difficult. We’re sent here to lead,” she said.

Tulsi, what are you for sure not getting from Santa this year?

The Hawaii congresswoman explained her stance yesterday with a press release on her campaign website. “I could not in good conscience vote against impeachment because I believe President Trump is guilty of wrongdoing,” she said.

I also could not in good conscience vote for impeachment because removal of a sitting President must not be the culmination of a partisan process, fueled by tribal animosities that have so gravely divided our country. When I cast my vote in support of the impeachment inquiry nearly three months ago, I said that in order to maintain the integrity of this solemn undertaking, it must not be a partisan endeavor. Tragically, that’s what it has been.”

She also introduced a resolution calling on the House to censure Trump on five issues she implied were far more substantial. Those include carrying out wars without congressional approval, illegally “occupying and pillaging” Syria, “recklessly enabling” Turkey to invade Northern Syria and ethnically cleanse Kurds (a U.S. ally), continuing to support Saudi Arabia’s “genocidal war” in Yemen and scrapping nuclear agreements with Iran and Russia, thereby strongly increasing the risk of nuclear proliferation.

While her move was undeniably unpopular within the Democratic Party she is hoping to lead into the next election, impeachment itself is a highly controversial tactic. The latest poll from Gallup (published Wednesday) shows support for impeachment dropping well below 50 percent while the president’s approval ratings continue to move upwards. Furthermore, it is entirely unclear how Democrats intend to actually remove Trump from office as to do so would require a similar vote from the Republican-controlled Senate.

Jayapal claims that Trump’s approval ratings should not be considered static and that his support could quickly melt away if Republican senators “do the right thing” and back his removal. But fully 100 percent of House Republicans voted against impeachment, something the president celebrated as a sign that their party was united like never before.

Senate Majority Leader Mitch McConnell (R–KY) has already declared that there is “no chance” that they will allow Trump to be removed. There also remains a serious question as to whether House Democrat Leader Nancy Pelosi will even send the articles to the Senate for a vote, leaving the process completely stalled. Trump is evidently ready for battle, claiming on Twitter that “Pelosi feels her phony impeachment HOAX is so pathetic she is afraid to present it to the Senate, which can set a date and put this whole SCAM into default if they refuse to show up! The Do Nothings are so bad for our Country!”

Pelosi feels her phony impeachment HOAX is so pathetic she is afraid to present it to the Senate, which can set a date and put this whole SCAM into default if they refuse to show up! The Do Nothings are so bad for our Country!

Thus, the entire process is a high-risk strategy from the Democrats that some feel could end up backfiring. “Trump is going to be able to say there was a conspiracy against him– with some justification,” Rolling Stone’s Matt Taibbi said. “It’s a disaster. If they had just not done this and argued against Trump’s presidency on other grounds– on how is America doing, inequality, all those things, it would have been tough for him. But now they’ve handed him a couple of issues, huge ones, that he’ll be able to carry all the way to the finish line…it’s amazing that they did this.”

Best part: As soon as Pelosi banged the gavel, all the wars ended, everyone got healthcare, homelessness was solved, mass shootings stopped, and Flint got clean water.#WorkingForThePeople #IMPEACHMENTVOTE https://t.co/T5XGxNoQkN

Gabbard is serving her fourth term in the U.S. House of Representatives. She has served in the Hawaii Army National Guard for sixteen years and was elected to the state’s legislature at age 21. Real Clear Politics’ cumulative poll tracker has her polling at around two percent. Time will tell whether her latest move will resonate with the public or hurt her campaign.