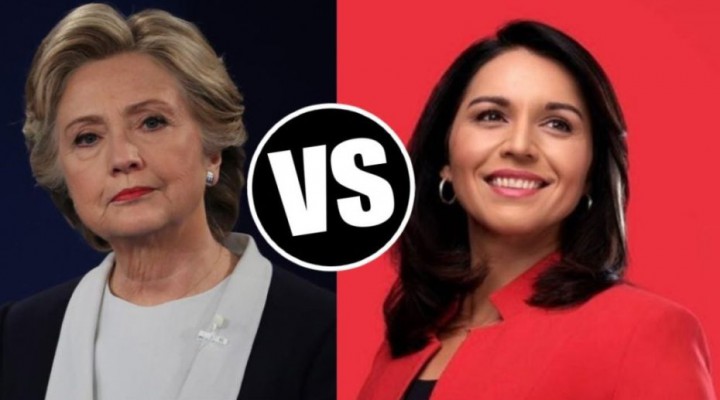 The sanity test was failed recently when Hillary Clinton lashed out at her party member Tulsi Gabbard, inferring she was a “Russian asset”.

The low-ball mudslinging and pantomime palaver among America’s political class is like a theater of absurd. Any form of vilification is now acceptable. President Trump and his Twitter rants may have helped set the bar of indecency to an all-time low, but Democrats and Republicans have quickly joined the descent into madness.

The sanity test was spectacularly failed recently when former Democratic presidential candidate Hillary Clinton lashed out at her party member Tulsi Gabbard, inferring she was a “Russian asset”. The Hawaii congresswoman, who is vying for a run at the presidency in next year’s elections, was defended by some fellow Democratic politicians. But many Clinton aides and media pundits doubled down on Clinton’s smear campaign, reiterating that Gabbard was “working for the Kremlin”.

This bipartisan Russophobia can be traced back decades to the Red Scare paranoia of the Cold War and McCarthyite persecution during the 1950s of suspected Soviet sympathizers in Washington and Hollywood. But for the past three years, since the 2016 election, the Cold War has been crazily enlivened with the “Russiagate scandal” of alleged interference in American political affairs by Moscow. It was the Clinton campaign, establishment media and her intelligence agency supporters that launched that canard against Trump.

Despite lack of evidence and credibility as shown by the vacuous Mueller probe earlier this year, the ridiculous Russiagate narrative and its underlying Russophobia still manages to dominate the views of the US political class, as exemplified by how Clinton’s preposterous smearing of Gabbard was given undue media coverage and supportive commentary. Affording trust and respect for such inane paranoia is surely a sign that America has officially gone insane.

Another symptom of collective madness is seen when truth and factual evidence are presented, but then the truth-teller is pilloried and the facts are blankly ignored.

Tulsi Gabbard told the truth on a recent national TV debate when she said plainly that “the US supports Al Qaeda terrorists”. The incredulous looks from the other Democratic candidates indicated that they are cocooned in a fantasy-world of official American propaganda which claims that US military forces are in Syria and elsewhere to “fight terrorism”.

For speaking such unvarnished truth, veteran servicewoman Gabbard was savaged in media reports and commentary for disseminating disinformation and lies. As well as being labelled a “Russian asset”, she is also denounced as an “Assad apologist”.

However, this week two developments demonstrate that Gabbard is correct in her linking of US support to terror groups in Syria and the Middle East more widely.

Despite this group winning an Oscar award for one its propaganda films, the White Helmets have been outed by several investigative reports as a media arm for the Al Qaeda-affiliated Hayat Tahrir al Shams (formerly, Nusra Front) and other Islamic State (ISIS) outfits. The pseudo rescue group only works in the diminished areas that are under the control of the jihadist terror network. The White Helmets are unknown to, or repudiated by, most of the Syrian civilian population. They have been exposed for having mounted false-flag terror attacks with chemical weapons and falsely attributing the attacks to the Syrian Arab Army or allied Russian forces. “They are a complete propaganda construct,” says award-winning journalist John Pilger.

For Trump and other Western governments like the British and French to openly support the White Helmets with millions of dollars is irrefutable proof of the official sponsorship by Western powers of the terrorist network in Syria. Of course, that is consistent with the analysis that these same governments have waged a covert criminal war of regime change against Syria. Again, it is only Tulsi Gabbard among American politicians who has explicitly stated this nefarious involvement of Washington in Syria. Yet she is condemned from all sides as a liar and foreign agent.

The second development this week indicting US links to terror groups – but which is studiously ignored by the Western media – are credible reports of American military force airlifting Al Qaeda-type jihadists out of northeast Syria.

Russia’s Defense Minister Sergei Shoigu this week confirmed that hundreds of suspected jihadi prisoners had escaped from jails and camps amid the turmoil of the Turkish offensive against Kurdish militia.

Syrian state media reports that, “US occupation continues to transport hundreds of Daesh [ISIS] terrorists from Syria to Iraq”.

Many of the detained terror suspects were lifted by American transport helicopters from the giant Al Houl camp near Hasaka city and relocated to western Iraq. Rather than handing over these illegal militants to advancing Syrian state forces, the Pentagon seems intent on holding on to its proxy assets. Maybe to fight in a renewed insurgency against Syria or elsewhere that Washington designates for regime-change operation.

In separate media reports, US forces are also being relocated from eastern Syria to set up bases in western Iraq. This suggests a concerted consolidation between US military forces and the terror groups which were used to wage the failed war in Syria.

Whenever Washington’s political class has descended into name-calling and smearing based on clueless prejudice and paranoia, and whenever the stark truth of America’s criminal war-making is roundly rejected – indeed twisted to demonize truth-tellers like Tulsi Gabbard – then we surely know that the USA now stands for the United States of [Mental] Asylum.

0 thoughts on “US Has Officially Gone Insane”