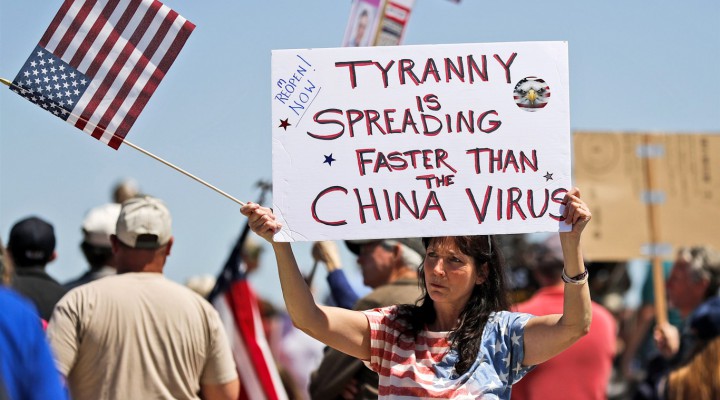 A new YouGov survey reveals the real effects that Anti-China rhetoric is having on shaping public perception and the reality of COVID-19’s impact on the world.

MPN– A new survey published today highlights the vast gaps between public perception and the reality of the impact of COVID-19 on the world. The survey, conducted by YouGov across eight Western nations — the United States, the United Kingdom, Germany, France, Spain, Italy, Sweden and Denmark — asked around 10,000 participants to rank the impact that the coronavirus has had on a number of countries. Respondents correctly placed the United States among those countries worst affected by the pandemic; nearly six million Americans have tested positive for the virus, and over 180,000 people have lost their lives, with Brazil being the only other country to reach 100,000 deaths.

However, over ten percent of Europeans falsely stated that China was the worst hit by COVID-19. Americans were even further off the mark, with 28 percent thinking the same, and over half believing that China was in the top two states hardest hit by the virus. China actually appears at only number 168 in Worldometers’ list of countries ranked by COVID-19 deaths per capita and number 199 on COVID-19 infections per capita, with all those lower being poorer countries that have done nothing like the testing Beijing has. Indeed, judging by deaths per capita, China has fared better than Western COVID-19 poster child New Zealand, a country showered with praise for its exceptional response to the coronavirus, Prime Minister Jacinta Arden being christened “Saint Jacinta” by the Financial Times. There have been precious few articles praising Beijing for its handling of the novel virus, which it first detected just before the new year. In fact, pundits and politicians alike have excoriated Xi Jinping and his government’s response as callous, ineffectual, or even near-genocidal, to the point where 54 percent of Americans believe that China should be made to pay reparations to the U.S. and the world.

China’s impressive COVID-19 figures could be explained by undercounting, either deliberate or accidental. This is certainly the opinion of most of the West, as large majorities in each of the eight countries polled respond that Beijing is doing so, and deliberately. Only nine percent of Americans, for instance, said that Chinese figures were “probably about right.” Western public skepticism clashes strongly with the international medical community, who have effusively praised China’s “commitment to transparency.” “I have never seen the scale and commitment of an epidemic response at this level in terms of all of government involvement,” said Dr. Michael Ryan, the World Health Organization’s Chief Executive Director for Health Emergencies, praising the organization of the Chinese state. “The challenge is great, but the response has been massive and the Chinese government deserve huge credit for that response and for the transparency in which they have dealt with this.” The editor’s of The Lancet, perhaps the most prestigious medical journal in the world, also praised China’s “remarkable” commitment, “working diligently and effectively” to eradicate the virus. However, they warned, their transparency and effectiveness are being “threatened by rumors and misinformation” emanating from the United States. While some have criticized Chinese authorities for not acting sooner and allowing the pandemic to escape from Wuhan, by January 23, they had locked down most of Hubei province, roughly the size and population of the United Kingdom, after only 17 people had died.

In comparison, only 42 percent of Americans thought the U.S. was undercounting, with 27 percent responding that they were overreporting deaths and infections. This is despite President Trump publicly stating that lowering the figures would help him politically, his administration subsequently taking control of the official numbers from the CDC, and almost immediately seeing a drop in the infection rate. (Europeans polled were far more skeptical of official U.S. figures than Americans were).

Much of the great gap in public opinion and the empirical data might be explained by the anti-China rhetoric emanating from the White House, where officials have insisted on calling COVID-19 the “Wuhan Flu,” the “China Virus” or similar names aimed to deflect public anger towards Beijing. Thus, when images of a huge, crowded pool party in a reopened Wuhan surfaced, they went viral online, causing outrage around the world. Yet Wuhan residents were unrepentant, telling the world that the strict anti-virus measures they endured for months have paid off, and there is a lesson to be learned.

John Pilger: Another Hiroshima is Coming, Unless We Stop It Now

Both major parties have also ramped up the hostile rhetoric towards Beijing, with Trump and Biden accusing each other of being soft on China. With an ever larger U.S. military presence in the South China Sea, blaming China could turn to bombing China unless we are careful.

Feature photo | A woman holds a sign as she attends a rally outside the Missouri Capitol to protest stay-at-home orders put into place due to the COVID-19 outbreak in Jefferson City on Tuesday. Jeff Roberson | AP