HOME / SOCIAL/CULTURAL / Nancy Pelosi Has a Solution to COVID-Induced Hunger, Evictions and Poverty: Pray for Republicans 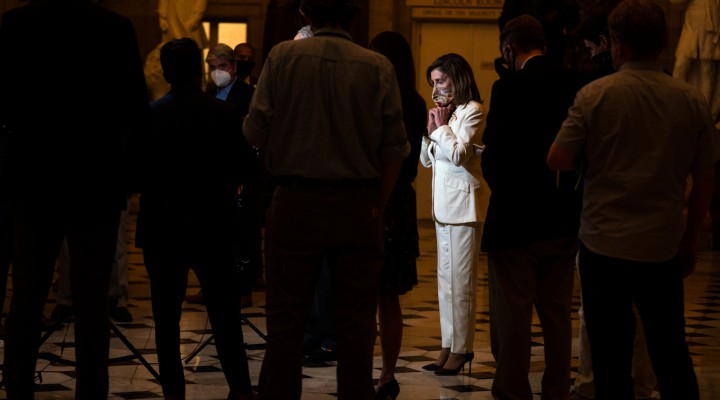 As millions of Americans wrestle with hunger, unemployment and evictions, millionaire Nancy Pelosi wants you to pray the poor away.

MPN– Amid a COVID-induced economic crisis that is causing 26 million Americans to go hungry, up to 40 million to face imminent eviction, and more than 50 million to file for unemployment, Americans are looking to elected officials for leadership, guidance, and hope. On Sunday morning, Democratic Speaker of the House Nancy Pelosi answered in an unusual manner: by issuing a public prayer asking the country to pray for the sick, struggling and needy, but also to “pray harder” for those who refuse to help them, presumably meaning the Republicans.

On this Sunday morning as we pray for the American people, I wanted to share “A Responsive Prayer for Justice,” wrote Pelosi on her official government website:

Pray for those who are hungry.

Pray harder for those who will not feed them.

Pray for those who struggle each week to pay their bills.

Pray harder for the wealthy who do not care.

Pray for those who are homeless.

Pray harder for those who deny them shelter.

Pray for the sick and lonely.

Pray harder for those who will not give them comfort.

Pray for those who cry out for dignity.

Pray harder for those who will not listen.

Pray for those oppressed by unjust wages.

Pray harder for those who exploit them.

Pray for those who bear the yoke of prejudice.

Pray harder for those who discriminate against them.

Pray for those whose basic needs are denied.

Pray harder for the public officials who cater to the greedy and ignore those bound unjustly.

I hope Nancy’s prayers to baby Jesus will help, since US government sure the fuck isn’t. https://t.co/is53EgiRcj pic.twitter.com/j41FJ3E3Uo

The prayer was published as a press release, suggesting Pelosi wanted it read widely. Yet this response to the crisis was not well received by some users on social media, who felt that given her considerable political power, she was in a position to offer the public far more than symbolic assistance. “The people of San Francisco and the United States need voices willing to represent us and actually stand up for our policy needs rather than serving Wall Street and Beltway agencies. Nancy Pelosi’s prayers are a poor substitute,” responded her Democratic primary challenger Shahid Buttar.

What a hypocritical load of shit from @SpeakerPelosi. Worth millions AND IS THE SPEAKER OF THE HOUSE.

Who the hell are these wealthy people you’re praying for? It’s literally you! You’re calling out yourself you corrupted ghoul. pic.twitter.com/LinPU4M6y7

Republicans and Democrats are currently negotiating new bills to respond to the fallout caused by the COVID-19 pandemic. Among the consequences of the virus has been a sharp spike in the amount of Americans unable to find enough food. Surveys have shown that nearly 11 percent of the country went hungry at some point in the last week, that number almost doubling for black and Latino respondents. Food banks across the country have been inundated. The federal moratorium on evictions has now expired, with up to 40 million at risk of losing their houses. Tens of millions have lost their jobs and their employer-based healthcare as a result. But at the same time, the country’s billionaires have seen their wealth increase by $685 billion since lockdowns began in March.

Despite this, Pelosi continues to oppose Medicare-for-All and has already indicated that she is willing to cave in to Republicans on the latest coronavirus response bill, telling CNN yesterday that, while they are advocating for a $2 trillion stimulus package, Democrats will automatically accept $1 trillion, hardly the best strategy to begin negotiations.

The Californian politician has a history of tone-deaf actions that poorly judge the public mood. In April, she appeared from her house on The Late Show with James Corden, sitting in front of a $24,000 refrigerator, telling the English comedian of her passion for a brand of ice cream that costs $13 per pint. Many felt that Pelosi, who has an estimated net worth of $120 million, was out of touch with the economic hardships faced by ordinary Americans suffering during the pandemic.

In June, amid a growing protest movement against racist police violence, she and other top Democrats filmed themselves taking a knee while wearing West African Kente cloth, but refused to endorse many of the movement’s demands, including a serious reckoning with the nature and funding of policing. Indeed, a leaked 2015 memo from the DCCC advises Democrats not to offer support to the movement, to listen but not offer any guarantees.

Thus, while she rhetorically sympathizes with those affected by the economic fallout from the pandemic, it appears that Pelosi will not push for systemic or substantial change, quite literally offering the people thoughts and prayers instead.

Why “Incremental Change” Is Worse Than No Change At All

0 thoughts on “Nancy Pelosi Has a Solution to COVID-Induced Hunger, Evictions and Poverty: Pray for Republicans”