HOME / WORLD / In Afghanistan, American Troops Patrol the Same Routes Their Fathers Did 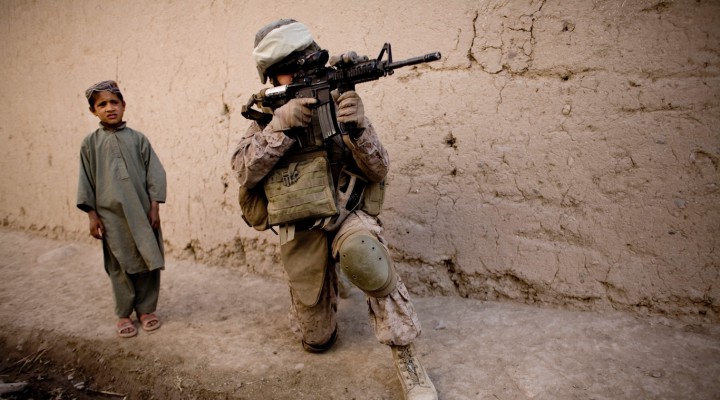 Thousands of US soldiers continue to pace and patrol exactly the same routes as their predecessors did in 2001, fighting a seemingly endless conflict that both the American and Afghan public have long since soured on.

MPN– Nineteen years ago last week the United States invaded Afghanistan, a country halfway around the world that few in America had heard of and even fewer knew anything about. Today, thousands of U.S. soldiers and many more private military contractors continue to pace and patrol exactly the same routes as their predecessors did in 2001, fighting a seemingly endless and pointless conflict that both the American and Afghan public have long since soured on.

One example of this is Master Sgt. Trevor deBoer, deployed to the country three times with the 20th Special Forces Group. “When we started this, people asked why I was going, and my response was, ‘So my sons don’t have to fight this war,’” deBoer told military news site Stars and Stripes.

But, ironically for deBoer, Afghanistan is exactly where his son, Spc. Payton Sluss ended up, metaphorically and literally walking in his footsteps. “My feet were walking the same land you were,” Sluss said to his father. This father-son dynamic is not as unique as one might expect; Stars and Stripes also profiled a number of other parents and children in the same situation.

The story was another case of life imitating art, as it bore an eerie resemblance to a three-year-old article in the satire outlet The Onion, called “Soldier Excited To Take Over Father’s Old Afghanistan Patrol Route.” In it, a fictional interviewee claims that “It’s just so incredible that I’ll soon be walking the very same footpath as my old man, securing the perimeter of Camp Chapman in Khost Province just like he did so many years ago,” expressing his pride in taking flak from the same angry rebel groups and dodging IEDs on the same deserted roads. But reality is increasingly driving satirists out of a job these days.

The Real Lesson of Afghanistan? Regime Change Does Not Work

A new poll found that Americans are extremely weary of the conflict and want it to come to an end as soon as possible. Nearly 62 percent of the country backed a peace agreement between the U.S. and the Taliban signed in February, with the number of respondents who want to keep troops in Afghanistan until “all enemies have been defeated” dropping from 30 percent in 2019 to just 15 percent today. The poll also found that Americans want a decrease in foreign interventions and military presence around the world. About twice as many favor cutting the military budget than increasing it.

Lee Camp: How the Media Used the Bounty Scandal to Stop the ‘Threat’ of Peace in Afghanistan

President Trump appeared to be on the verge of pulling out of Afghanistan for good in the summer and was in negotiations for a peace deal. However, anonymous intelligence officials leaked stories to The New York Times, Washington Post, and Wall Street Journal alleging that Russia, and later Iran, were paying off the Taliban to kill U.S. soldiers, causing a media storm that was used as the basis to postpone the withdrawal. Trump is now claiming only that U.S. troops “should” be out by Christmas.

The United States and its allies quickly invaded Afghanistan in the wake of the September 11, 2001, terrorist attacks, citing the Taliban’s refusal to hand over chief suspect Osama Bin Laden. Yet the Taliban were, in fact, willing to negotiate through neutral third parties, but were not given the chance. Bin Laden was captured and killed in 2011 — over nine years ago — yet the United States has still not left the country.  The Trump administration has even ramped up the war, dropping the “Mother of All Bombs” — the largest non-nuclear explosion in world history — in 2017. Between January and October of 2018, it dropped 5,982 more bombs, the highest number in over a decade.

The humanitarian cost of the war is debated, with little agreement about the scale of the violence perpetrated against Afghanistan’s people. What is not in doubt is the attitude of Afghans. A poll published last year found that zero percent of respondents described themselves as “thriving,” and 85 percent described their situation as “suffering.” Less than half the country said they experienced any enjoyment in the previous day, while 52 percent admitted to constantly worrying. The $2 trillion conflict has much to do with it.

The war has a serious effect on American lives too, and not just those of the military. The state of Oregon, for instance, was not able to effectively tackle this summer’s record-breaking wildfires because their firefighting helicopters had been requisitioned by the Department of Defense and sent to Afghanistan to continue bombing the country. Over 1 million acres of Oregonian land was destroyed, and eleven people were killed as a result. Continuing to send fathers and sons off to fight in foreign lands will mean fewer resources at home.

0 thoughts on “In Afghanistan, American Troops Patrol the Same Routes Their Fathers Did”