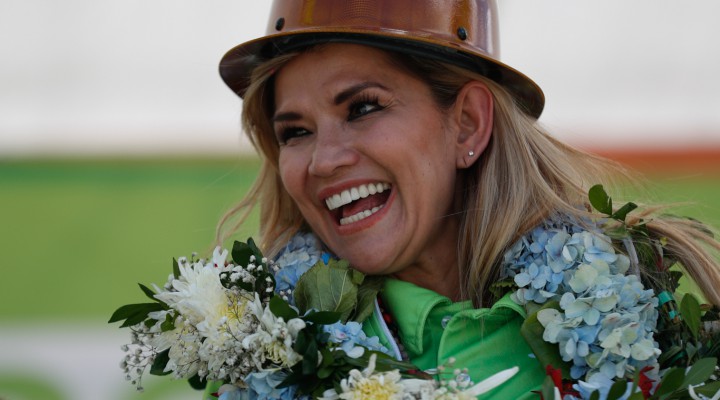 Flight logs of the Bolivian presidential jet show that on November 11, the day of the coup, the aircraft was not in La Paz or any other Bolivian airport, but flying to Brazil’s capital Brasilia.

MPN– Bolivian President Evo Morales was overthrown in a U.S.-backed coup in November. But new details have emerged that suggest Brazil had a larger hand in his ouster than previously confirmed. Argentinian outlet Pagina 12 reports that flight logs of the presidential jet show that on November 11, the day of the coup, the vehicle was not in La Paz, nor any other Bolivian airport, but flying to Brazil’s capital Brasilia. Throughout much of November, where the country entered an intense period of conflict between Morales supporters and coup leaders, the aircraft was traveling around major cities in Brazil. Since the coup, the Bolivian jet has made 25 separate visits to the country and has not visited another state.

Questions abound: Why is the Bolivian presidential jet making so many trips to Brasilia? Since Jeanine Añez, the far-right Christian fundamentalist senator that replaced Morales was in the presidential palace, who was on the plane? To what extent was Brazil involved in the November coup? Brazilian President Jair Bolsonaro, who came to power under questionable circumstances himself, made no effort to appear disappointed or outraged when Morales was overthrown by the military and replaced with Añez. “The Brazilian government congratulates Sen. Jeanine Añez for constitutionally assuming the Presidency of Bolivia and welcomes her determination to work for the country’s pacification and prompt holding of general elections,” read a statement from Bolsonaro’s Foreign Ministry. The “pacification” refers to the massacres carried out by death squads, who were given pre-immunity for any crimes committed while destroying resistance to the new regime.

One of the first victims of the coup was Pagina 12’s own journalist Sebastian Moro. Just hours after Moro had penned an article denouncing attacks against journalists by the coup plotters, he was found unconscious in the street, beaten into a vegetative state. He died a few days after arriving at the hospital. His death has been largely ignored by media, human rights, and press freedom groups. Indeed, MintPress News was the only Western outlet to cover his murder.

The United States, and virtually the entire spectrum of corporate media, hailed the military overthrow of Bolivia’s most popular leader. However, this week, the New York Times admitted that the basis for supporting the coup – a report into         Morales’ supposed election meddling in the October election – was completely false. Morales comfortably won the election and was about to start another five-year term. In 13 years in office, Morales and his Movement to Socialism Party (MAS) had managed to halve poverty and reduce extreme poverty even further. Per capita GDP, adjusted for inflation, grew by over 50 percent under the MAS. They were able to do this by renationalizing Bolivia’s hydrocarbons industry, taking back public control over the country’s vital resources from transnational corporations, and by transferring a very small amount of the elite’s wealth to the bottom 99 percent of the country. In November, Morales was forced to flee the country on a jet belonging to the government of Mexico. It is now clear why he did not use his own presidential plane.

Añez was a little-known senator from a party who received only four percent of the vote in the October elections. Despite this, the military hand picked her to become the figurehead of the new administration. According to Pagina 12, the Brazilian Ambassador had a hand in her selection. As soon as she took power, she began massacring protestors and building an engine of state repression. The much-promised new elections were postponed amid the COVID-19 pandemic, but questions remain as to how democratic a process can be when the MAS party, who convincingly won in October, are effectively banned from campaigning, with many of their leaders under arrest on bogus charges. Last week, the country’s Supreme Court announced that elections should take place on September 6, a decision welcomed by MAS but condemned by the new government.

After supporting the coup in Bolivia, Bolsonaro now appears to be pushing for a “self-coup” in Brazil. Last month, after a number of key members of his cabinet resigned in protest, he led a demonstration calling for the military to intervene and shut down Congress and the Supreme Court. Five former defense ministers penned an open letter asking the military to oppose his demands. The conflict is taking place amid the second-worst COVID-19 outbreak in the world, with three-quarters of a million Brazilians already testing positive. Bolsonaro has constantly downplayed or denied the existence of the coronavirus, brushing it off as merely a “little flu” and holding public rallies with supporters even after he and many in his entourage tested positive for the virus. “Brazil is at the mercy of a deranged lunatic” is how independent outlet Brasil Wire described the country’s situation. Thanks to Brazil, Bolivia might be suffering the same fate as well.