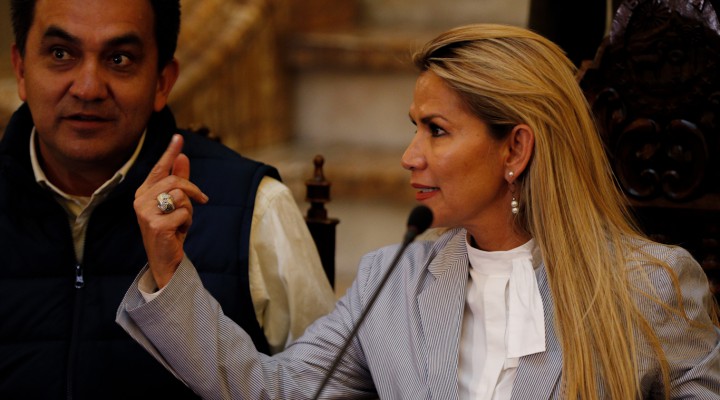 From privatizing natural resources to partnering with other right-wing regimes, Bolivia’s new interim government has wasted no time in reversing years of hard-fought gains.

MPN– It has been barely one month since the administration of Jeanine Añez seized power in a military coup in Bolivia, but it has wasted no time in attempting to transform the economy and society. Its latest move is aimed at privatizing the country’s economy. A government spokesperson confirmed the fears of many, claiming that “I believe the government should reduce its own size” and a protagonistic role should be given to private enterprises. In case that was not clear enough, he emphasized, “Yes, I’m talking about privatization.” Bolivia’s economy is dependent on its nationalized oil and gas industries.

Just 1 month after their coup in Bolivia, Development Minister for the unelected ~transitional government~ spells out their agenda:

"Yes, I'm talking about privatization. The govt role should be seriously reduced and the leading role given to private enterprise" https://t.co/s51qGRecsG

After military generals appeared on television demanding his resignation, longtime president Evo Morales stepped down, citing the growing, targeted paramilitary violence against his MAS (Movement towards Socialism Party) colleagues. Morales, and his Vice-President Alvaro Garcia Linera, fled to Mexico for safety. The military chose Senator Jeanine Añez as his successor.

Añez is a strongly conservative Christian who has described Bolivia’s indigenous majority as “satanic” and vowed to bring the Bible back into politics. She has also provided the military carte blanche to use unlimited force in suppressing all resistance to her rule, even creating a squad of masked, heavily armed death squads aimed at uprooting leftist and foreign “terrorists.” Despite this, large areas of the country are in open rebellion and completely uncontrolled by the new government.

The unelected govt of Bolivia is threatening to disenfranchise the entire region of El Chapare (the country's biggest MAS stronghold). Unless the overwhelmingly indigenous citizens allow the police who massacred them at Sacaba to take over, "they won't be able to have elections." pic.twitter.com/vcYyW61JMw

For a supposed “transitional” government, a caretaker regime holding the reins until imminent elections are organized, the Añez administration has certainly made some bold moves. It has already pulled Bolivia out of multiple international and intercontinental political and economic organizations, such as ALBA (the Bolivarian Alternative for the Americas) and UNASUR (the Union of South American Nations), both of which had a more left-of-center outlook.

Meanwhile, it has expelled large numbers of foreign nationals, including around 700 Cuban doctors that made up the backbone of the country’s new free healthcare system. It has also recognized U.S.-backed anti-president Juan Guaidó as the rightful ruler of Venezuela. With U.S. support, Guaidó attempted another Bolivia-style coup last month. Interior Minister Arturo Murillo has accused the Venezuelan government of being at the head of a vast narcotics conspiracy, ignoring his own boss’s ties to drug-runners (Añez’s nephew was caught with more than half a ton of cocaine in Brazil).

Murillo has formally requested the Israeli military come to train Bolivia’s armed forces and has eliminated entry visas for Americans and Israelis. Considering the IDF’s expertise in suppressing an indigenous population, Murillo’s intentions are worrying an increasing number of his countrymen. The government has also participated in a crackdown on dissenting journalism, closing down many TV networks including Bolivia TV, RT and TeleSUR. Even foreign journalists have been assaulted, detained and killed.

This latest move at privatizing the economy is part of an effort to “dismantle the apparatus of the dictatorial regime of Evo Morales,” as the Minister of Communication, Roxana Lizarraga, put it. On the orders of the International Monetary Fund, criticized by many as simply an extension of the U.S. government, the country’s oil and gas industries were privatized in 1996. International corporations like Enron, Shell and Repsol YPF were not even required to pay for their shares, making the move tantamount to the biggest giveaway in modern Bolivian history. Furthermore, royalties paid to the government were slashed to just 18 percent.

Water was also privatized. Bechtel, an American corporation, increased the prices to levels almost no Bolivian could afford to the point where water and sewage cost over half of an average Bolivian’s yearly wage. Bechtel also persuaded the government to privatize the sky, making it illegal to gather rainwater. The result was mass thirst that led to nationwide protests that became known as the Water War.

Within months of gaining office, Morales made good on his promise to nationalize key sectors of the economy. The move generated an extra $31.5 billion in government revenue over the next decade. He used the money to fund ambitious social programs. For example, over 11 percent of the revenues went to fund public universities, indigenous associations and a basic income grant to all low-income Bolivians over 60 years old.

Under Morales’ guidance, poverty halved and extreme poverty fell even further as citizens felt the benefits of the country’s natural resources. This, the Center for Economic Policy Research stresses, could not have been possible without nationalizing the hydrocarbons industry. Perhaps more important than all this, however, was the newfound dignity Bolivia’s indigenous majority felt at seeing the first indigenous president in the country’s history. The community is often treated with contempt bordering on revulsion by the light-skinned elite, but Morales has been part of a movement that inspired them to organize and take a protagonistic role in their country’s politics and society.

With the U.S. and the local elite back in charge of Bolivia and promising to re-privatize the economy, both their newly won social status and their improved economic circumstances are at imminent risk. A reversal of this policy will take coordinated resistance on the scale of the 2000 Water War.