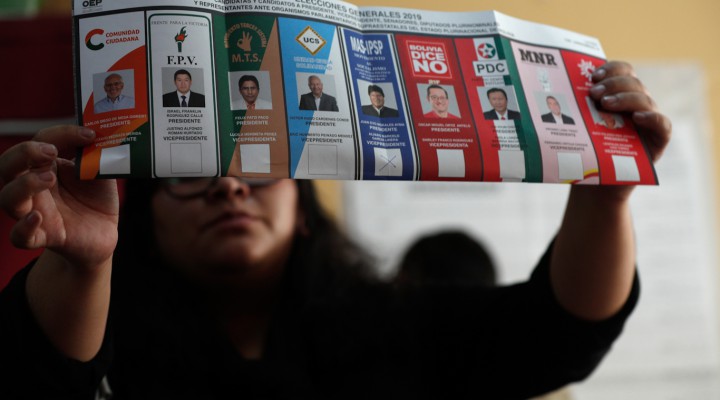 Democracy in Bolivia did not die in darkness, it died to the applause of the Washington Post.

MPN– The Washington Post published an op-ed yesterday from a research team at the Massachusetts Institute of Technology showing that there was no fraud in the October elections in Bolivia after all. The Post had for months claimed that President Evo Morales won the election fraudulently, thus justifying the U.S.-backed coup that ousted him weeks later. There simply “isn’t statistical support for the claims of vote fraud,” the research team concluded.

While the Post deserves some credit for publishing the findings at all and for accurately using the word “coup” to describe the events – something much of the media refused to do – there are still a number of glaring errors and omissions with the new Post line. For one, the article frames the events leading to Morales’ ouster as “protests” that police joined. A more honest framing would be that the powerful right-wing opposition conducted a campaign of terrorist violence that included burning down the houses of and kidnapping elected officials from Morales’ Movement to Socialism (MAS) party. For example, Patricia Arce, Mayor of the town of Vinto, was kidnapped, had her cut her hair off and her body painted red, and was publicly dragged through the streets and abused, with her captors forcing her to commit to leaving office. Morales made clear he was only stepping down due to the threat of increased violence.

The Post story also presents the Organization of America States (OAS) as an honest neutral body raising genuine concerns over the election, rather than a politically biased group that is majority funded by the Trump administration. Indeed, in justifying its continued funding, USAID argued that the OAS is a crucial tool in “promoting U.S. interests in the Western hemisphere by countering the influence of anti-U.S. countries” like Bolivia. It also describes the dozens of people protesting the upheaval of democracy murdered by security forces in well-documented massacres as merely people dying in “post-electoral conflict,” effectively whitewashing the new government’s actions.

The article also fails to mention the salience of their findings, particularly the American government’s full support of the coup, and glosses over the media’s overwhelming endorsement of events. Thus, the entire article is presented as an interesting anomaly, rather than evidence of a major international crime.

Nor does it mention the fact that the Washington-based think-tank, the Center for Economic Policy Research (CEPR) had already published a comprehensive statistical analysis of the election in November, showing virtually the same results. As CEPR wrote, the results and the OAS’ questions “were not hard to explain.”

Pushing through a coup

The Washington Post is a particularly influential news source. Beyond the fact that it is one of the most widely read newspapers in the United States, its prestige, location in the capital and the fact that so many in positions of political power read it, makes everything it publishes especially important. Even before the October 20 vote, the Post was claiming that Morales standing for re-election was a threat to democracy. Its editorial board immediately called his victory into question suggesting he was a “dictator” of an “inept and repressive” leftist regime, and falsely claiming, without evidence, that polls showed he would lose the election. Polls actually suggested he would win by around ten points – exactly the margin the now accepted results showed.

Thus, by the time U.S.-backed military generals forced Morales out, the Post editorial board was fully behind the action, insisting that, “this was not a coup in the usual sense” and expressing its relief that the country was now in the hands of “more responsible leaders.” “There could be little doubt who was ultimately responsible for the chaos: newly resigned president Evo Morales” it told its readers in the first paragraph of an article entitled “Bolivia is in danger of slipping into anarchy. It’s Evo Morales’s fault.”

Oh no, turns out the Bolivia coup was one big whoopsie. Too bad liberals need the Washington Post to sanction obvious facts long after it’s too late rather than studying US history for 10mins to infer what was happening in Bolivia was propped up by half ass imperialist bullshit. https://t.co/dl7HkbVe56

The Post was hardly alone in supporting the coup. In fact, virtually the entire spectrum of corporate media did the same. The New York Times, for example, insisted that this was not a coup, but the “arrogant” and “increasingly autocratic” Morales had merely “resigned.” It also praised “democratic-minded Bolivians” for standing up to him and using the “only remaining option” open to them. Meanwhile, The Wall Street Journal hailed the coup as “a democratic outbreak in Bolivia,” applauding the military’s refusal to allow Morales to “steal another election.”

Since coming to power, the administration of Jeanine Añez has attempted to crush all resistance to her rule, pre-exonerating the police and military of all crimes committed during the “re-establishment of order” and the `pacification” of the country. Those security forces have conducted massacres of indigenous protesters. Independent media has been shut down and journalists and human rights groups have been targeted, threatened and killed. Añez has tried to force through wholesale privatization of the country’s economy, dismantling social services and pulling Bolivia out of multiple international and intercontinental treaties. She is a deeply conservative Christian, who has expressed her disgust for the “satanic” indigenous population (who make up over half the country). “I dream of a Bolivia free of satanic indigenous practices. Cities are not for the Indian” she tweeted, adding that they should be confined to the desert or the remote highlands of Bolivia.

A lesser-known senator before being handpicked by the military for her new role, Añez originally promised to retire from politics after her role as “interim president.” But she later performed an about-face and declared that she would run for president in the upcoming May elections. This has disappointed many, even among her own ruling coalition. The right-wing parties are fractured, with multiple candidates campaigning to win the presidency. Meanwhile, the MAS is more united than ever, and its candidate, Luis Arce, has a double digit lead in polls. However, as in October, there is a great deal of concern that the MAS might not be able to assume the presidency, with Añez’s administration attempting to arrest Arce and other top MAS officials. Morales himself has been blocked from running for a senate seat and cannot return to Bolivia from exile on pain of arrest.

New research shows there was no fraud in Bolivia's October elections, which Evo won.

As usual, outlets like @washingtonpost publish these facts only after the damage has been done. After their original misinformation has triumphed. https://t.co/VCVN5XAmpw

In contrast to the Post and the rest of the corporate press, MintPress News’ team both inside and outside of Bolivia have consistently offered more accurate and incisive coverage of the coup and its aftermath, with first hand accounts of the massacres and the upcoming elections that most of the media have ignored or downplayed. While the Post has, months after the fact, eventually presented a more truthful version of the Bolivian election, the damage has been done.

In much the same way that corporate media supported coups against other anti-imperialist governments like in Chile in 1973, Venezuela in 2002 or Honduras in 2009, only to later condemn them, long after they could influence anything, elite consent for regime change was manufactured. Democracy in Bolivia did not die in darkness, it died to the applause of the Washington Post.

A Successful Coup Against Trump Will Murder American Democracy