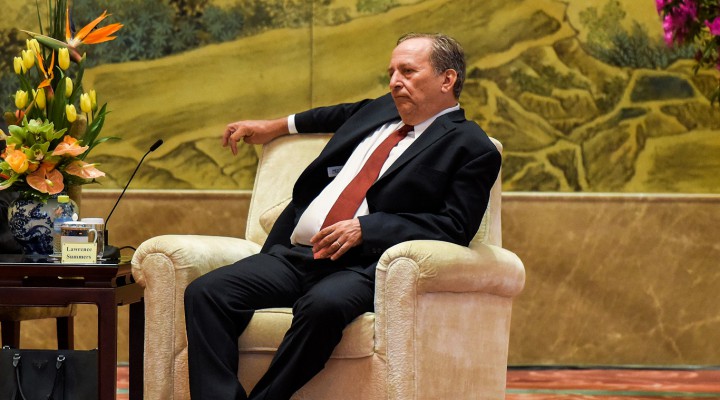 78% of Americans support the proposed $2,000 stimulus check, but that hasn’t stopped the Washington Post, New York Times, and a cadre of DC economic elites from sounding the alarm against the measure.

MPN- Former U.S. Treasury Secretary, Chief Economist of the World Bank, Director of the National Economic Council, and President of Harvard University, Lawrence Summers has warned against any implementation of a $2,000 COVID relief check.

Writing in business publication Bloomberg, the 66-year-old economist insisted that the proposal, which has drawn support from figures as diverse as Bernie Sanders and Donald Trump, was a “big mistake,” as it would likely “overheat the economy.” He noted that he did support strengthening social safety nets and other spending measures, but maintained that $2,000 was too much. “There is no good economic argument for the $2,000 checks,” he confidently concluded.

Yet there are many reasons not to treat Summers as an infallible economic sage. Chief among them is his (major) role in causing the 2008 financial crisis that devastated the United States and much of the rest of the world.

During his time in the Department of the Treasury under President Clinton, Summers successfully lobbied for the repeal of the Glass-Steagall Act, a 60-year-old piece of legislation that separated commercial banking from the wild west of investment banking, insulating Americans’ savings from the dangerous world of venture capitalism. He also pushed for increased deregulation of the finance system in general, setting the stage for an inevitable collapse. A paid consultant to Citigroup and other financial behemoths, he also later opposed efforts to break up the “too big to fail” banks after the crisis.

This is perhaps not even Summers’ most notorious moment, however. In 2000, the Governor of California Gray Davis (D), reached out to the then-Treasury Secretary for advice, suspecting that energy giant Enron was toying with the state’s energy supply for profit, greatly increasing electricity prices even while power outages surged. Summers reportedly scoffed at his suspicions, patiently explaining that California’s main problem was over-regulation and that he should allow Enron to operate more freely. One year later, Davis’s suspicions were confirmed as Enron went bankrupt in a massive scandal that exposed the company as a Ponzi scheme.

Summers has always been a passionate believer in the magic of the free-market. While at the World Bank, he imposed austerity and trickle-down economics on a myriad of poor countries, while also infamously promoting the export of toxic waste from rich countries onto poor countries in Africa on economic grounds, suggesting that poor people’s lives were worth less than those of the rich. “The economic logic behind dumping a load of toxic waste in the lowest wage country is impeccable and we should face up to that,” he wrote.

Summers also resigned from his position as President of Harvard in 2006 after a vote of no confidence from the university’s faculty. This came in the wake of him attacking African-American professor Cornel West, claiming that his rap album was an “embarrassment” to the university. It appeared that the faculty found Summers’ comments that women were inherently inferior in science and engineering, thus explaining the lack of female graduates and staff in those fields, to be more of an embarrassment, however. No doubt the wild financial risks he took with Harvard’s endowment — blunders estimated to have cost the university $1.8 billion — did not help his cause, either.

Summers is not the only one in corporate media sounding the alarm about giving money to poor people. The Washington Post was so strongly against the idea that its board rushed out an editorial insisting that it was a “bad idea” pushed for political reasons, not economic ones, claiming that all it would achieve would be to “blow nearly half a trillion taxpayer dollars.” Meanwhile, economist and New York Times columnist Paul Krugman warned that the checks would be “divisive,” and that their economics “aren’t very good.” What “divisive” means in this context appears unclear, as a recent poll showed that 78% of Americans support the $2,000 checks. 57% “strongly support” them, while only 7% “strongly oppose” them.

The cost of the project, estimated by detractors at around $464 billion, is less than one-quarter of what the billionaire class has increased its wealth by in 2020. At the same time as the super-rich have been getting richer, however, ordinary Americans have been suffering. A September report noted that 56 million had been forced to use a food bank at some point, while 51 million Americans were made unemployed by July. A poll released Monday found that Americans rated 2020 to be the worst year in modern history. A $2,000 check at the end of it might have made some difference in their outlook, but if Summers has anything to do with it, that will not be coming their way at all.