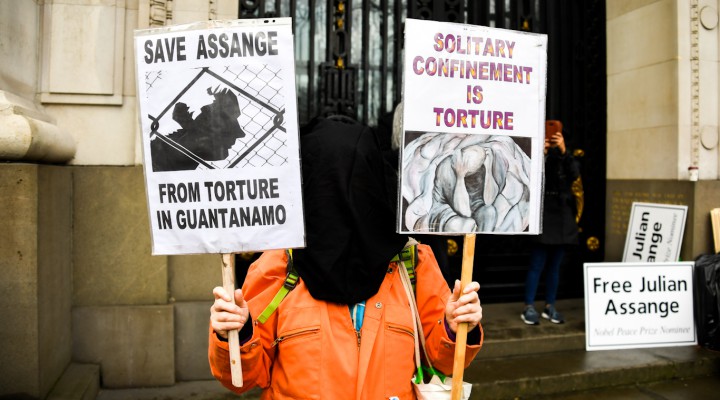 Assange’s treatment in the UK’s Belmarsh Prison has been so poor that convicted murderers and other high-security inmates had to stage a mass protest to secure his transfer to the hospital wing.

MPN– Doctors4Assange, a group of 195 medical professionals from 30 countries, released a statement today “strongly condemning” a British court decision to keep Wikileaks co-founder Julian Assange incarcerated, despite a possible outbreak of COVID-19 at Belmarsh Prison in London where Assange is being held. The group argued that, due to his history of medical neglect, extremely fragile health, and his chronic lung condition, he was at particular risk of both contracting and dying from the virus.

Despite acknowledging he was at increased risk, District Judge Vanessa Baraitser denied him bail because she considered him a flight risk. “There are substantial grounds to believe if I released him today he would not return to face his extradition hearing,” Baraitser said. Assange previously sought refuge in the embassy of Ecuador in London.

The Australian publisher’s hearing played out in bizarre circumstances on Wednesday. The court, like the rest of the United Kingdom, was on lockdown, meaning only 15 people were in attendance. One of his lawyers, Edward Fitzgerald QC, wore a large facemask, while the other, Mark Summers QC, participated remotely via audio, as did the American government attorneys seeking his extradition. Not only was Assange not physically present, but his video connection was also terminated early meaning he was not even able to follow proceedings, let alone participate in them. He was also unable to communicate with his legal team.

My ill son detained w/out charge in Belmarsh

Baraitser also claimed that Belmarsh Prison was a safe place for Assange to be kept, as no one had yet tested positive for COVID-19. But testing kits are notoriously hard to come by in the United Kingdom, with only 113,777 people tested across the entire country by Friday (less than 0.2 percent of the population). Worse still, over 100 Belmarsh employees are currently off work after self-isolating with coronavirus symptoms or coming into contact with a confirmed case. Two British prisoners have already died from the virus, with 19 more testing positive.

Thus, Doctors4Assange argues, it is more a question of when, rather than if, Belmarsh is infected. “Julian Assange is just such an unsentenced prisoner with significant health vulnerability. He is being held on remand, with no custodial sentence or UK charge in place, let alone conviction,” they wrote, pointing to the United Nations Human Rights Council’s pronouncement on prison clemency.

“With outbreaks of the disease, and an increasing number of deaths, already reported in prisons and other institutions in an expanding number of countries, authorities should act now to prevent further loss of life among detainees and staff,” UN Human Rights High Commissioner Michelle Bachelet said. “Now, more than ever, governments should release every person detained without sufficient legal basis, including political prisoners and others detained simply for expressing critical or dissenting views,” she added.

All prisons in England are now indefinitely closed to visitors. Iran, in an effort to stem the spread of coronavirus, has released tens of thousands of prisoners from its jails. Poland is expected to follow suit and send up 12,000 prisoners home early. Yet the United Kingdom has yet to follow suit, despite the pleas, even from its own prison governors. Andrea Albutt, the head of the Prison Governors Association, warned of an “unprecedented risk” to the overcrowded prison system, recommending the immediate release of many inmates. Meanwhile, in the U.S., there is growing concern that “a storm is coming” – that prisons will be hotbeds of contagion. Disgraced media mogul Harvey Weinstein has already contracted COVID–19 while in Rikers Island jail.

Assange’s extradition trial began in late February. He faces 18 U.S. charges of hacking and breaches of the Espionage Act, specifically for the publication of evidence leaked by Pvt. Chelsea Manning that detailed evidence of American war crimes in the Middle East. If found guilty, he faces up to 175 years in prison. He had been granted asylum by the progressive Ecuadorian administration of Rafael Correa. However, after Correa was replaced by the pro-American administration of Lenin Moreno in 2017, his welcome in the Ecuadorian embassy in London waned. Since his removal from the building in 2019 he has been held at Belmarsh Prison, a high-security penitentiary, often in solitary confinement. His treatment was so poor that convicted murderers and other high-security inmates staged a mass protest, managing to secure his transfer to the hospital wing.

Current Wikileaks boss Kristinn Hrafnsson also “condemned in the strongest possible terms” Judge Baraitser’s decision. “COVID-19 is bringing forth the best in people and the worst in people. Today’s decision by the judge was an example of the latter,” he said.