HOME / SOCIAL/CULTURAL / To Be Assanged: Notes From The Edge Of The Narrative Matrix 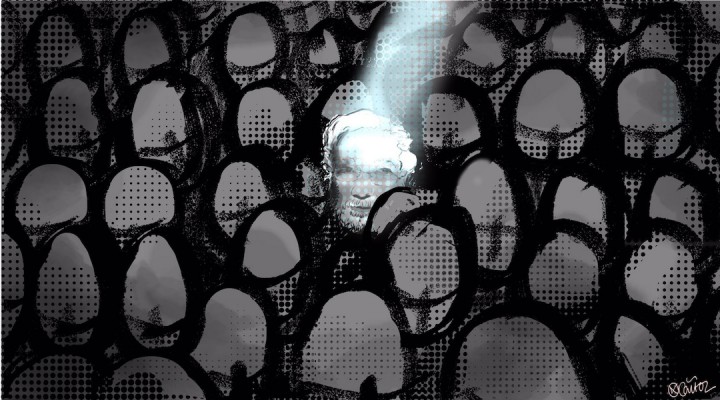 Murderous governments who deceive their citizenry are not entitled to any degree of secrecy whatsoever.

A society is only as free as its most troublesome truth-teller.

The large and enthusiastic Assange demonstrations in the UK have filled me with gratitude and love, but they’ve also made me ashamed of Australia. Those crowds dwarf anything I’ve seen here in Melbourne, and he’s our man. The Brits are defending an Australian citizen better than Australia is.

This is what happens when you use the same mass media propaganda that’s used everywhere else on a population whose only cultural value is not getting worked up about things. Wake up, Australia! For fuck’s sake, now is the time to start caring about something!

Ever notice how there are no “Don’t Free Assange” rallies? No “Extradite Assange” activist forums? That’s because the only normal human beings interested in his case want him free. It’s the Free Assange crowd versus the “Thinking about that will cause me cognitive dissonance” crowd. The only grassroots energy regarding Assange is on his side. The entire other side of the debate is (A) governments and their lackeys and (B) the propagandized masses who have been manipulated into staying silent and compliant as the empire works its will.

Sometimes I remember that Assange published leaks on the goddamn CIA just when it would hurt him the most, right at the height of the smear campaign, just after he’d pissed off all the liberals, and my jaw drops all over again. Publish or be damned is right. The balls on that guy.

Some of my friends and family can’t even bring themselves to publish “I support Assange” on their Facebook because it might make things a little socially awkward for them for a while. The contrast is striking.

As Assange’s case heats up I’m getting more and more Trump supporters in my mentions defending his persecution, because the propaganda against him in Trumpy echo chambers has been effective. It’s just like the liberals in 2016, watching them succumb to the narrative one by one.

Debunking smears is all well and good, but the actual Assange case isn’t about smears, it’s about a question: Should journalists be punished for exposing war crimes? Make people answer this question when they are smearing him. Demand they address this central issue.

It’s pretty clear that the magistrate at the Assange extradition trial came in with her mind already made up about how she’s going to rule. The prosecution is there to give her an excuse. The burden of proof is on the defense to prove she can’t legally do the thing she plans to do.

The prosecution’s argument for extradition has largely amounted to “This case has nothing to do with a journalist exposing war crimes. This case is about whether Assange broke the rules that we made to prevent journalists from exposing our war crimes.”

Per the Assange extradition argument the Saudis should be allowed to extradite and behead anyone who practices blasphemy.

Yesterday I saw someone justifying the persecution of Assange by arguing that his position as WikiLeaks founder actually makes him a powerful individual, and it’s not the first time I’ve seen his smearers try to spin that angle. It’s a common imperialist tactic: perform mental gymnastics to twist the most powerful empire of all time into the poor widdle victim, and down-power groups as powerful. Now the skinny computer geek is the big bully who picked on the poor defenseless CIA and Pentagon.

You see these power dynamic reversals everywhere: western-backed “rebels” are the little guys standing up to power, the Palestinians are bullying the poor defenseless IDF, Russia is controlling world affairs despite its relatively small economy, etc.

Humanity is on the back foot, and it shouldn’t be. We should be arguing over how much prison time US war criminals should be serving and taking the US military to court for falsely classifying information about war crimes, not playing defense like we’re the ones who did wrong.

Arguing that the US should not only be able to hide war crimes by falsely classifying the evidence, but also that they should be able to punish the people who exposed them, is like saying Jeffrey Dahmer was not only right to murder but that the police who went after him should go to jail.

Hi my name’s Snooty McCentrist. I write op-eds telling Berners that Americans would never elect a socialist, which I know for a fact because I spend the rest of my time writing op-eds persuading Americans never to elect a socialist.

Russiagaters are exactly as dumb as QAnon cultists. If this hurts your feelings, good.

Even if nothing else good comes from Sanders securing the nomination, at the very least it would force the liberal narrative managers who’ve been posing as adversarial journalists against Trump to expose what they really are. That alone would be a huge win.

The emotional reactions that mainstream media manipulators are having to Sanders’ repeated wins tells you they identify with the ruling establishment which he keeps criticizing. They themselves feel they are part of that establishment, so they feel like he’s attacking them. The fact that these reporters feel attacked on an emotional level by the Sanders campaign tells you that they are not journalists, but court stenographers. Their job is to regurgitate lines favorable to the power establishment, and they know it.

Propaganda is the main obstacle preventing the people from using the power of their numbers to effect real change. If the Sanders campaign accomplishes nothing else, it is at least forcing the propagandists to expose themselves. The more mainstream that exposure goes, the better.

This is why I’ve been paying so much attention to the Sanders campaign lately. Not because I’m under any delusion that he’s perfect or that presidents make real changes, but because the establishment reaction to him can expose the propaganda machine before a mainstream audience.

Democratic Party leaders can’t get away with openly saying they want to kill Bernie’s nomination at the convention because they think he’ll rock the establishment boat too much. This has meant that all they’re left with is the hilarious argument that the guy who’s winning all the primaries definitely can’t beat Trump in the general election, but someone who’s failed to win any primaries definitely can.

Anyone who doesn’t want the CIA abolished is either ignorant or a depraved bootlicking sociopath.

Starvation sanctions, like the coronavirus, primarily kill the weakest and most vulnerable segment of their victims. The US is like if the coronavirus was a country.

The owners of mass media should not be allowed to own stocks in other industries. Their ability to manipulate public perception makes it a form of insider trading.

Language has always been enforced in a way that keeps the working class from rising to power. That’s why so-called “bad words” are always from the vernacular used by the poor. Anyone who truly wants a people’s revolution will therefore avoid language policing as much as possible.

Everyone I argue with online is basically just saying “Actually it’s good for a small group of sociopaths to have all the power and we should definitely give them more.”

People talk about the futility of internet debate, but I’ve found I can learn way more by kicking ideas around with normal human beings online than I can by reading the dry bloviations of some overeducated wanker on Counterpunch or wherever. In order to understand the narrative matrix, you’ve got to engage it.

0 thoughts on “To Be Assanged: Notes From The Edge Of The Narrative Matrix”