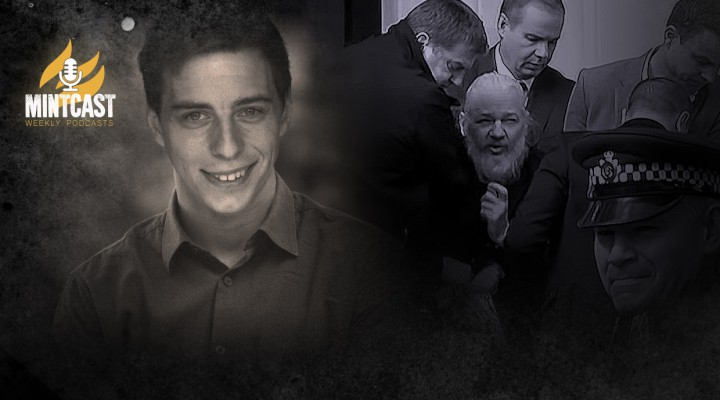 In this episode of MintCast, independent journalist and editor of ShadowProof Kevin Gosztola discusses the intricacies of the Assange hearings where the former editor of Wikileaks stands accused of 17 counts of violating the Espionage Act, an archaic law that has been used to target whistleblowers.

Welcome to MintCast, the official weekly MintPress News podcast hosted by Mnar Muhawesh and Whitney Webb that re-launched in February 2020. MintCast is an interview podcast featuring dissenting voices, independent researchers and journalists who the establishment would rather silence.

One such voice is independent journalist and editor of ShadowProof, Kevin Gosztola. He joins MintCast to discuss his exclusive on the ground coverage of the Julian Assange extradition hearings taking place in London this past week.

Assange, who was forced to sit in a glass cage far from his defense team during last week’s hearings, faces extradition to the United States for alleged violations of the Espionage Act. The next hearing in the case is set to resume on May 18. He stands accused of 17 counts of violating the Espionage Act, an archaic law that dates back to World War I and has increasingly been used to target whistleblowers in the United States. He also faces one count of violating a computer crime law that the U.S. government asserts is also a charge of espionage. If convicted on all counts if extradited, Assange would face 175 years in a U.S. prison.

For the past decade, Wikileaks has helped expose a litany of crimes and corruption by the political class supported by both the Republican and Democratic Parties making Assange a target of the deep state and war-profiteering establishment. This includes publishing the Vault 7 leaks, exposing the CIA’s surveillance and intelligence capabilities worldwide, State Department cables — highlighting the war agendas under Hillary Clinton to benefit Israel, DNC emails — revealing how the Hillary Clinton campaign colluded with the DNC to smear and undercut Bernie Sanders and his supporters in the 2016 election and much more.

And in 2007, Wikileaks published documents leaked by Army Private Chelsea Manning that detailed evidence of American war crimes that took place during the war in Iraq.  After previously being sentenced to 35 years in prison and spending months in solitary confinement, Manning was resentenced to 18 months in prison last year for refusing to testify against Assange.

In targeting the publisher of journalistic information that acts as a watchdog to those in power and works in the interest of the public, rather than those who committed the crimes, human rights organizations like Amnesty International have warned that this is a grave attack on press freedoms and the charges against Assange should be dropped.

Kevin joins us from London to discuss the recent hearings and the intricacies of Assange’s situation, the case against him and the precedent this case sets for journalism and the people’s right to know about U.S. empire and corruption.

0 thoughts on “Podcast: Kevin Gosztola Discusses the Latest Developments in the Case Against Julian Assange”