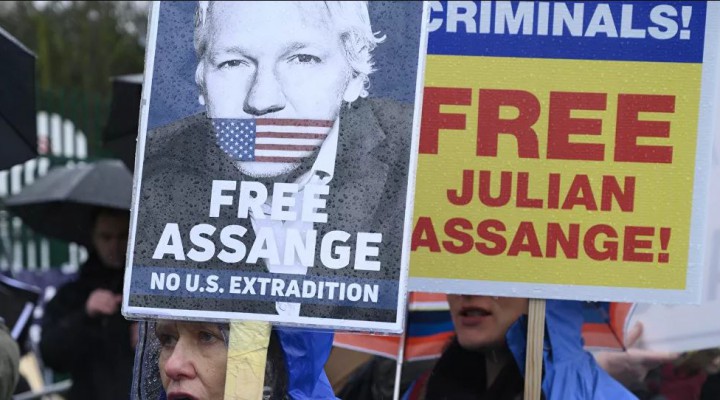 The persecution of Julian Assange is one of those breakthrough moments when suddenly people realise that almost everything they have been told to believe is not true.

This week the Australian-born journalist and publisher has been subjected to a show trial in a British court with the threat of extradition to the United States looming. If he is extradited, the 48-year old is facing 175 years – a death sentence – in prison on wholly contrived espionage charges.

Assange is being persecuted for the sole and simple reason that he exposed war crimes and systematic corruption by the US government and its Western allies. His years of arbitrary detention and the torture endured over the past year while in solitary confinement in a British dungeon are a grim warning to all citizens. The warning is that their supposed democratic rights are non-existent as far as the powers in Washington and London are concerned. If you dare speak truth to power, then this fate will also be yours.

Thus, when it gets down to it, the harsh reality is that there is no such thing as democracy in the US or Britain. Elections and media are but window-dressing to hide the brutal truth that fundamental, basic democratic rights of free speech and due legal process are not inalienable principles, but rather are dispensable privileges whenever the powers-that-be ordain so.

Julian Assange’s incarceration and pillorying is like an inquisition from medieval times happening in the year 2020. He dared expose the rampant, systematic crimes of so-called authorities through his Wikileaks site. His blasphemy was to expose the charlatans and mass-killers who masquerade as pious leaders.

Those revelations showed the public that the pretensions of democracy and rule of law by the American and British governments are nothing but hypocritical, empty posturing. Assange’s courageous publishing work demonstrated how those governments have waged criminal wars and committed genocidal crimes; how they have made a mockery of international law and democratic rights. And for that heroic service to public truth and empowerment with the truth, Assange is being pilloried like a rebellious serf by overlords posing as “governments” and “judges”.

Assange’s show trial is also powerfully revealing of the real nature of Western so-called news media. Not one of the major US or British news outlets have given any coverage, let alone comment, regarding his week-long extradition trial.

A journalist and publisher is being whipsawed in the court as if he is a dangerous terrorist. He is denied elementary due process by being confined to a glass-cage dock, not able to communicate with his defence lawyers, unable to even hear what his accusers are claiming.

His extradition, to be determined at a future court hearing, seems like a foregone conclusion, such is the bias and hostility towards Assange from the presiding British judge, Vanessa Baraitser.

Given the international outcry from hundreds of doctors and UN representatives over Assange’s torture endured while in British custody, and given the grotesque abuse of legal process by the American and British so-called authorities, the case should be thrown out immediately – if there were any modicum of justice.

The vendetta against Assange tells us what kind of societies citizens (or rather subjects) are living under in the US and Britain. These states are oligarchies where “democratic rights” are strictly conditional on subjects not stepping out of line, such as criticising war crimes or illegal global spying.

Julian Assange has torn through the largely invisible matrix of propaganda and power that people really live under. The saccharin myths of “democracy” and “free speech” are shown for the ugly, putrid reality that they are. And the Western corporate-controlled media in their silence about what is going on are also condemned for the lying servile machines that they are.

We must not accept the fate being prepared for Assange as if it is inevitable or as if we are powerless to overthrow it. The first step towards freedom is truth, and thanks to Julian Assange, we have the power to be free. We know the tyrannical nature of the governments that presume to rule over us in our names. There must be a popular uprising in defence of Assange. Because no-one is free until he is.

A final note by way of testimony: anyone who has been enlightened by Wikileaks’ revelations over the past decade will know that the current escalation of conflict in Syria’s Idlib is due to NATO powers illegally occupying that country. They will know that NATO powers have for years covertly sponsored terror groups to carry out a criminal regime-change war. By contrast, anyone who relies on Western governments and mainstream media for “information” will have no idea whatsoever about what is really going in Syria. A wider war could erupt any day and those who are brainwashed by Western regimes and their media are impotent to stop it. The empowerment of citizens by Julian Assange and Wikileaks over the years is the difference between ending wars or fueling them.

0 thoughts on “Assange Rips the Matrix”