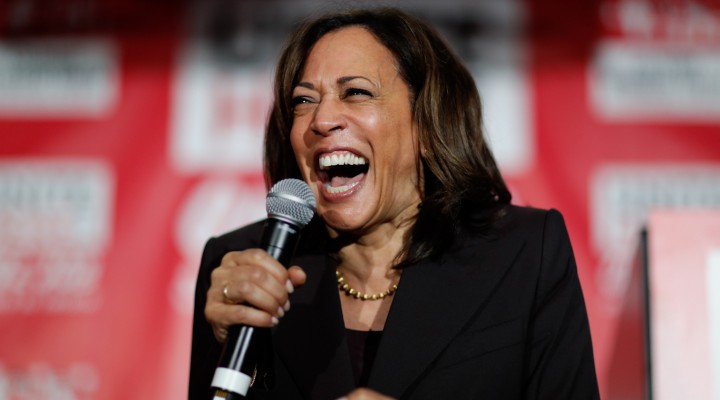 Just as America seemed to be in the midst of reckoning over-policing and racial justice, the Democratic establishment threw its support behind a hawkish former prosecutor with a questionable record.

MPN– There were mixed reactions to Democratic presidential candidate Joe Biden choosing Kamala Harris as his running mate last night. Many at the top of the party hailed the pick as a strong choice. “I’m thrilled to welcome Kamala Harris to a historic Democratic ticket,” said Biden’s predecessor Hillary Clinton, who described her as “an incredible public servant and leader, “I know she’ll be a strong partner to Joe Biden. Please join me in having her back and getting her elected.”

Perhaps unsurprisingly, the Trump campaign opposed the move, a newly-released advertisement describing her as a “phony” controlled by “the radical left.” “Voters rejected Harris,” the ad says, referring to her failed campaign for the presidential nomination. “They smartly spotted a phony. But not Joe Biden. He’s not that smart.”

Yet the Harris pick appears not to have gone down at all well with those on the left. Political commentator and co-founder of the leftist group Justice Democrats Kyle Kulinski reacted by claiming Biden was “going with the strategically brilliant move of picking somebody for VP who is despised by both the right and the left.” Journalist Elizabeth Lea Vos wrote that the DNC has chosen to “run an alleged rapist and a corrupt prosecutor… against Trump in the age of #MeToo and Black Lives Matter. In other words, the Democrats are the Republicans and everything is business as usual.” Meanwhile, Bernie Sanders’ National Press Secretary Briahna Joy Gray could not contain her dismay at the pick. “We are in the midst of the largest protest movement in American history, the subject of which is excessive policing, and the Democratic Party chose a ‘top cop’ and the author of the Joe Biden crime bill to save us from Trump. The contempt for the base is, wow,” she said.

A memo from the Green Party presidential candidate Howie Hawkins described the announcement as Biden “doubling down” on his “long history of excessive law enforcement and support for the war on drugs.”

While the left might think Harris’ past role as a California prosecutor is a negative, business executives felt it added to her campaign. “Her experience as a prosecutor makes her uniquely qualified to deliver the case against Trump,” marketing executive Mike Kempner told CNBC.

Kamala Harris at an event hosted by the Commonwealth Club in 2010, explaining her decision as San Francisco DA to get tough on truancy.

A “lock them up” mentality

Harris certainly has a controversial professional past. Although presenting herself as a “progressive prosecutor,” her record more closely resembles a tough on crime, “lock them up” mentality commonly seen among Republican lawmakers. Over the protestations of her own team, she pushed forward on her plan to jail parents for their children’s truancy, later publicly laughing about imprisoning them. She also has a long history of ethically questionable practices, including withholding evidence that would have freed innocent people from prison. As The New York Times wrote, “Ms. Harris fought tooth and nail to uphold wrongful convictions that had been secured through official misconduct that included evidence tampering, false testimony and the suppression of crucial information by prosecutors.” In 2014, Harris’ legal team argued in court that if minimum-custody inmates were released early, the state of California would “lose an important labor pool.” These inmates included firefighters, who are paid $1 an hour to confront the state’s deadly blazes. She later claimed she did not know her own office argued in favor of keeping parolees in jail so they could serve as cheap labor. During her short and unsuccessful shot at the party’s presidential nomination, Harris received more funding from billionaires than any other candidate. In 2017, she also broke ranks to side with Trump against outgoing president Barack Obama over the latter’s position on Israel, leading Grayzone journalist Max Blumenthal to describe her as a “political algorithm programmed by the Israel lobby.”