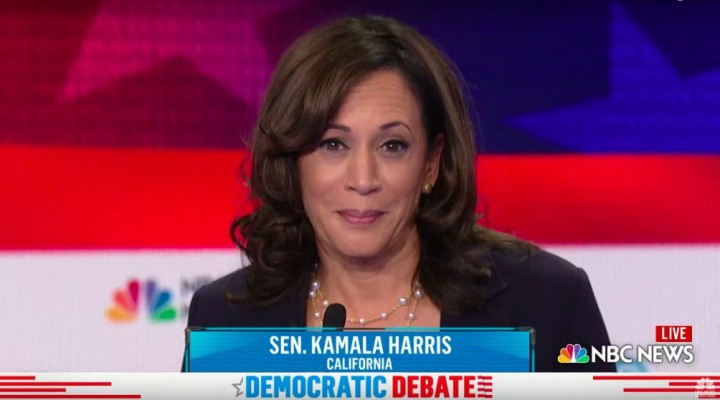 Night two of the debates was just as vapid and ridiculous as night one. Candidates interrupted and talked over each other a lot, questions about foreign policy were avoided like the plague to prevent NBC viewers from thinking critically about the mechanics of empire, and Eric Swalwell kept talking despite everyone in the universe desperately wanting him not to. Buttigieg and Gillibrand did alright, Bernie played the same note he’s been playing for decades, and everyone was reminded how bad Joe Biden is at talking and thinking.

Biden has been treated kindly by polls and regarded as a “frontrunner” in this race exclusively because for the last decade he hasn’t had to do anything other than be associated with Barack Obama. Now that he’s had to step out of that insulated role and interact with reality again, everyone’s seeing the same old garbage right-wing Democrat who sucks at making himself look appealing just as badly as he did in his last two presidential campaigns. By the end of the night, even Michael Bennet was slapping him around. 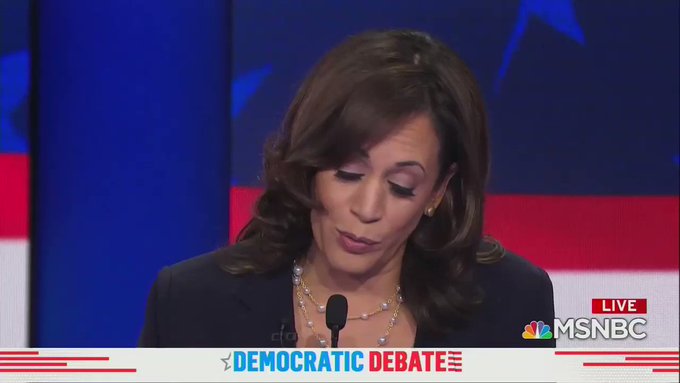 The full exchange between Kamala Harris and Joe Biden on Biden’s history with racial issues.

The moment everyone’s talking about was when Harris created a space for herself to attack Biden on his citing his collaboration with segregationists as an example of his ability to reach across the aisle and “get things done”. Harris had not been called upon to speak, and once given the go-ahead by moderator Rachel Maddow after interjecting went way beyond the 30 seconds she’d been allotted in tearing Biden apart. She skillfully took control of the stage and engineered the entire space for the confrontation by sheer dominance of personality, and Biden had no answer for it.

That’s the moment everyone’s talking about. But Harris had already been owning the debate prior to that.

The goal of a political debate is to make yourself look appealing and electable to your audience. You can do that by having a very good platform, or you can do it with charisma and oratory skills. It turns out that Kamala Harris is really, really good at doing the latter. She made frequent and effective appeals to emotion, she built to applause lines far more skillfully than anyone else on the stage, she kept her voice unwavering and without stammer, she made herself look like a leader by admonishing the other candidates to stop talking over each other, and she hit all the right progressive notes you’re supposed to hit in such a debate.

Unlike night one of the debates, night two had a clear, dominant winner. If you were a casual follower of US politics and didn’t have a favorite coming into the debate, you likely went away feeling that Harris was the best.

This wasn’t a fluke. Harris has been cultivating her debate skills for decades, first in the Howard University debate team where she is said to have “thrived”, then as a prosecutor, then as a politician, and she’ll be able to replicate the same calibre of performance in all subsequent debates. There’s more to getting elected than debate skills, but it matters, and in this area no one will be able to touch her.

Harris won the debate despite fully exposing herself for the corporate imperialist she is in the midst of that very debate. While answering a question about climate change she took the opportunity to attack Trump on foreign policy, not for his insane and dangerous hawkishness but for not being hawkish enough, on both North Korea and Russia.

“You asked what is the greatest national-security threat to the United States. It’s Donald Trump,” Harris said. “You want to talk about North Korea, a real threat in terms of its nuclear arsenal. But what does he do? He embraces Kim Jong Un, a dictator, for the sake of a photo op. Putin. You want to talk about Russia? He takes the word of the Russian president over the word of the American intelligence community when it comes to a threat to our democracy and our elections.”

Harris is everything the US empire’s unelected power establishment wants in a politician: charismatic, commanding, and completely unprincipled. In that sense she’s like Obama, only better.

Harris was one of the 2020 presidential hopefuls who came under fire at the beginning of the year when it was reported that she’d been reaching out to Wall Street executives to find out if they’d support her campaign. Executives named in the report include billionaire Blackstone CEO Jonathan Gray, 32 Advisors’ Robert Wolf, and Centerbridge Partners founder Mark Gallogly. It was reported two entire years ago that Harris was already courting top Hillary Clinton donors and organizers in the Hamptons. She hasn’t been in politics very long, but her campaign contributions as a senator have come from numerous plutocratic institutions.

Kamala Harris Set to Announce 2020 Run On or Around Martin Luther King Jr. Day. In 2 Years in Senate, majority of her donations have come from financial interests including Wall Street, financial industry lawyers, and real estate industry. https://kcbsradio.radio.com/blogs/doug-sovern/harris-ready-enter-race-president-sources-say … 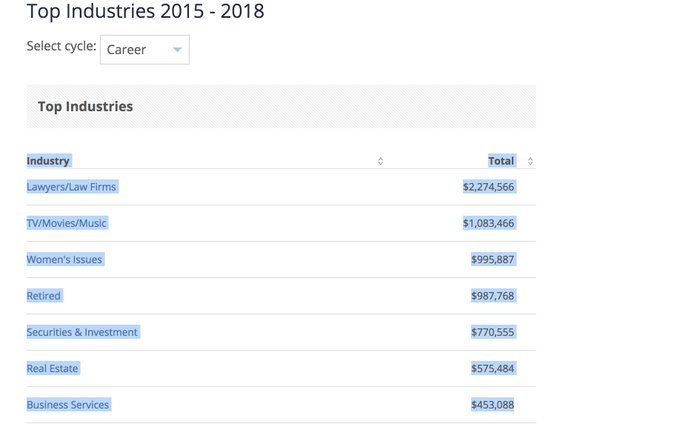 In the summer of 2017, just half a year into her term as Senator, Harris met with @HillaryClinton‘s top donors in the Hamptons. I do not think they were there strategizing how to pass #MedicareForAll and free public college https://pagesix.com/2017/07/15/kamala-harris-meets-with-democratic-elite-in-hamptons/ …

“Kamala is the big Democratic star right now, at a time when they badly need a star,” an insider said.

224 people are talking about this

Trump supporters like to claim that the president is fighting the establishment, citing the open revulsion that so many noxious establishment figures have for him. But the establishment doesn’t hate Trump because he opposes them; he doesn’t oppose existing power structures in any meaningful way at all. The reason the heads of those power structures despise Trump is solely because he sucks at narrative management and puts an ugly face on the ugly things that America’s permanent government is constantly doing. He’s bad at managing their assets.

Kamala Harris is the exact opposite of this. She’d be able to obliterate noncompliant nations and dead-end the left for eight years, and look good while doing it. She’s got the skills to become president, and she’ll have the establishment backing as well. Keep an eye on this one.

0 thoughts on “Kamala Harris Is An Oligarch’s Wet Dream”