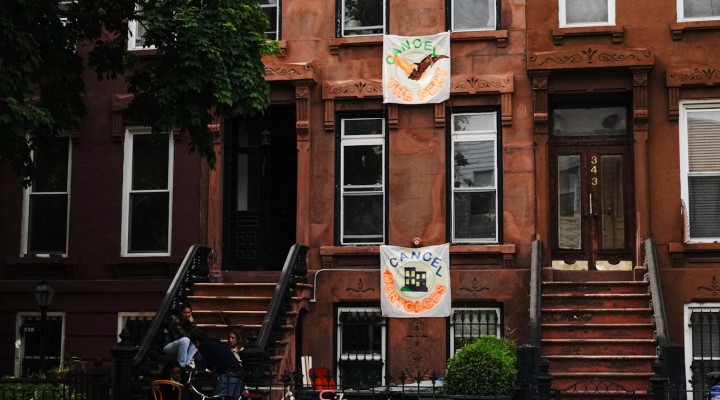 The federal moratorium on evictions expired this week, leaving 12 million renters at risk of losing their homes, and much as they did with healthcare, Democrats are offering little more than token non-solutions.

MPN- The best defense against a raging pandemic that has already claimed over 152,000 American lives is simply to stay home. But even this could soon become impossible for millions, as the United States is facing an impending eviction crisis of “biblical proportions,” according to the Housing Rights Initiative. Earlier this week, the federal moratorium on evictions expired, meaning the nation’s 12 million renters are now at risk of losing their homes. Renters tend to be poorer, many of whom are among the 52 million that have filed for unemployment benefits as a result of the COVID-19 pandemic.

Instead of extending the eviction ban, top Democrats, including California Sen. Kamala Harris and Ayanna Pressley (D-MA), proposed their own solution to the crisis: new money for a fund to help renters faced with eviction access legal representation. “We must take bold, urgent action to affirm that right and protect the millions of families facing housing instability,” said Pressley, as the bill was introduced yesterday.

Liberal outlet Vox presented the move as a “lifeline” to millions and a stroke of political genius. Yet others saw it differently. “Is this a joke?” responded The Intercept’s Aída Chávez on Twitter, suggesting that she saw the plan as pathetically weak non-solution to an impending crisis. “What if they just… introduced a bill to stop them from being evicted in the first place,” asked another user. Judging from reporting, this appears not to have occurred to them.

It’s like watching someone drown and promising you’ll resucitate them when you could just toss them a life preserver.

Harris, who is the prohibitive favorite with bookmakers to become Joe Biden’s vice-presidential pick come November, has a history of proposing piecemeal reform rather than bold solutions. According to a poll conducted last September, 58 percent of Americans, including nearly three-quarters of Democrat voters support making college free for all and totally eliminating outstanding student debt, a position advocated by Bernie Sanders. Harris, however, proposed instead to cancel up to $20,000 of debt only for Pell Grant recipients who start a business in a disadvantaged community and maintain that business for at least three years. “When you look at the requirements, it’s hard to imagine more than a handful of people would ever qualify for it,” said Matt Bruenig, founder of the People’s Policy Project.

The reaction to Harris’ proposal from the Democratic base was much the same as that to Rep. Joe Kennedy III’s (D—MA) recent statement that “Not a single patient should be forced to fight off medical bankruptcy in the midst of a global health pandemic without a lawyer by their side,” many feeling that he could have just stopped talking six or even 14 words sooner.

Republicans have put forward their own new coronavirus stimulus package that includes billions for the military and the FBI but nothing for hazard pay, nutrition assistance, uninsured Americans, or for state and local governments. While it does include a second $1,200 check, it also cuts unemployment benefits for tens of millions of Americans from $600 to $200 per week. Environmental justice group 350.org described the plan as a “disgraceful offering” from the GOP. “As unemployment skyrockets, this bill would cut off much of the support offered thus far to everyday people struggling to make ends meet. We won’t let Congress pass a giveaway to wealthy corporations while leaving our communities out to dry without a fight,” they wrote in a statement.

But Democrats have made pains to stress that they agree with the Republicans on the need to reduce unemployment benefits, even as there are no signs of a significant economic recovery in the short to medium term. “Look, it’s not $600 or bust,” said House Majority Leader Steny Hoyer (D-MD), claiming that a weekly $600 check serves as a disincentive to many to start working again. He did not dwell on what that said about American wages. In fact, the U.S. offer to the unemployed has been particularly stingy, in comparison to similar countries. For example, Western European countries like France, the U.K., Ireland, and Germany simply pay between 60 and 84 percent of newly unemployed workers’ pre-pandemic salaries. Meanwhile, businesses in New Zealand have had little problem finding generous financial sponsorship from their government. New Zealand has an unemployment rate of around 4 percent, compared to the U.S.’ 11 percent.

The Democratic Party is also at odds with its base on healthcare, a key issue during a global pandemic. 85 percent of Democratic voters support Medicare for All. But the Democratic National Committee blocked its inclusion in the party’s draft platform, voting it down, 125-36. The party is now facing a quiet internal revolt just three weeks from the National Convention.

Between a worsening pandemic, the threat of eviction, and a reduction in unemployment benefits, it appears that millions of Americans are in for a tough fall.

Feature photo | A view of a poster saying Cancel Rent Cancel Mortgage during the coronavirus pandemic on May 18, 2020 in Brooklyn Borough of New York City. John Nacion | STAR MAX | IPx