HOME / SOCIAL/CULTURAL / Creative Coronavirus Responses Appear Across the World, but Not in Trump’s America 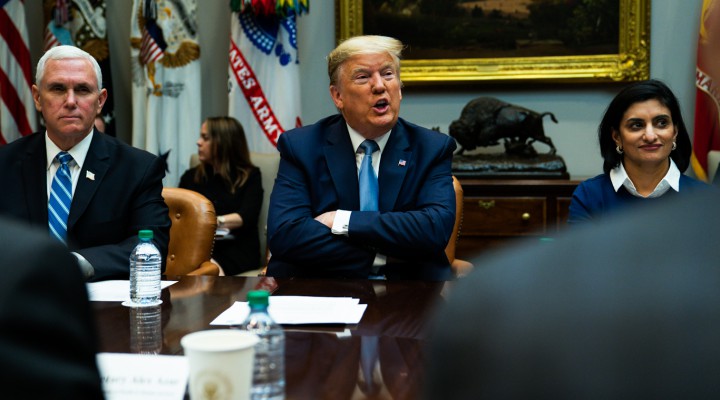 The World Health Organization has officially declared the coronavirus a pandemic and countries across the globe are coming up with clever methods of halting its spread putting the Trump administration’s lackluster response to shame.

MPN– As the World Health Organization declared the novel COVID-19 virus a pandemic today, countries across the globe are coming up with clever and creative methods of halting its spread or dampening its impact, putting the U.S.’ lackluster response to shame.

The world’s smallest country, the Vatican, confirmed its first case of coronavirus last week. Today, Pope Francis canceled public events and held his first ever online general audience instead, announcing he felt close to “all the sick people who have contracted the virus and are suffering from sickness and the many who are suffering from uncertainty.” The Holy See, like the rest of the Italian peninsula that surrounds it, is in complete lockdown. The Italian government announced yesterday that all mortgage repayments would be suspended during the crisis, allowing poor and middle-class families financial breathing space.

In the face of a severe outbreak inside the country, the government of Iran temporarily freed 70,000 prisoners from its jails. 9,000 people inside the Islamic Republic have contracted the virus, with 354 recorded deaths, and the government is keen its prisons do not become hotbeds of contagion. In Japan, Prime Minister Shinzo Abe has announced the government will provide subsidies for parents forced to take time off work to look after their children. South Korea has established “drive-thru” coronavirus testing facilities that can process 10,000 people per day and diagnose an individual in less than 10 minutes. Meanwhile, in Vietnam, local food bloggers report that authorities are delivering free meals to all those in self-quarantine.

Other countries are taking more drastic measures. Israel, for instance, is only allowing foreign travels to enter the country if they can self-quarantine for 14 days, while some European countries so far untouched by the virus have simply closed their borders to those coming from infected regions.

China, the epicenter of the virus, appears to have already hit rock bottom and begun to recover. While the government was criticized in the West for its response, there have been only 43 new cases in the previous two days across the entire country, with some industries in Wuhan itself re-opening for business, suggesting that their all-encompassing approach paid dividends.

In contrast, the response from the American government has been slow. On Monday Vice President Mike Pence finally announced that citizens could be tested for the virus free of charge, something taken for granted in virtually every other country in the world. However, the damage may have already been done; the first confirmed case of COVID-19 in the U.S. was nearly two months ago, with the White House slow to acknowledge its spread in the beginning. Individuals displaying symptoms and wishing to be tested have been turned away multiple times by hospitals following extremely narrow guidelines on who was at risk. Still others have been presented with bills of $3,500 for securing precautionary checks. And because there is no guaranteed sick pay, rent or mortgage relief, many poor Americans have had to choose between doing the right thing in self-quarantining, or potentially losing their job and their house.

There are more than 1,000 confirmed cases in the United States, but because of sparse testing, the real number of cases will undoubtedly be higher. One of those confirmed cases was an attendee at the Conservative Political Action Conference, also attended by the president and vice president. But only five Republican lawmakers are self-quarantining as a result of being in contact with the individual. Trump, however, maintains that he is “not concerned at all” with the news, claiming, “we’ve done a fantastic job” combatting it. He has also used the coronavirus to stoke xenophobic sentiment, tweeting that “we need the Wall more than ever,” implying that Latinos are the source of the pandemic.

The current administration is infamously anti-science. Trump has repeatedly claimed that climate change is a Chinese hoax, while Pence has lobbied to use federal money for so-called “gay conversion therapy.” But perhaps more concerning is that the U.S. is driven more than most countries by the profit motive. The country is unique in the developed world in not providing some sort of universal healthcare to its citizens, a serious drawback during a pandemic. Public health crises often require public healthcare systems. Furthermore, as NBC News reported, scientists in Texas were close to creating a vaccine against coronavirus in 2016 but could not find funding as the project was deemed unprofitable, and therefore, unworthy of further research. Faced with a pandemic that requires serious leadership, the Trump administration appears unwilling or unable to enact any policy that does not increase profits for those at the top.

Feature photo | President Donald Trump speaks during a meeting on the Coronavirus with health care executives at the White House, March 10, 2020, in Washington. From left, Vice President Mike Pence, Trump, and Administrator of the Centers for Medicare and Medicaid Services Seema Verma. Evan Vucci | AP

0 thoughts on “Creative Coronavirus Responses Appear Across the World, but Not in Trump’s America”