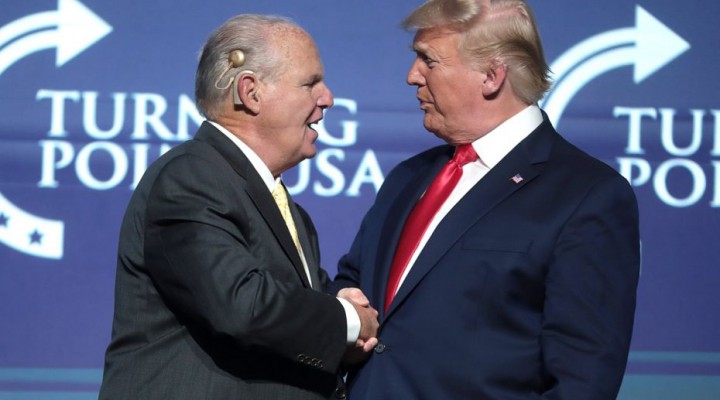 Pence, who believes the Earth is a mere 6,000 years old and that dinosaurs co-existed with humans, is the final arbiter on what medical information about the coronavirus reaches the public.

U.S. right-wing radio commentator Rush Limbaugh, to whom Donald Trump recently awarded a Presidential Medal of Freedom, an honor usually bestowed upon those who have markedly improved society in some way, recently suggested that the coronavirus, also known as COVID-19, was nothing more than the “common cold” that was “weaponized” by opponents of Trump to use it against him in this year’s election. Such pandering to those on the lunatic fringe who oppose modern science and medicine, including vaccinations, is not limited to the radio airwaves.

Republican Senator Tom Cotton of Arkansas has suggested that the coronavirus, a Chinese bio-warfare product, accidentally escaped from China’s only bio-security level 4 laboratory, the National Biosafety Laboratory, which is located in Wuhan, the city where the coronavirus outbreak was first reported. Cotton appeared to have been influenced in his opinion by Steve Bannon, the disheveled former chief strategist for Trump, who often traffics in far-right conspiracy theories. The Chinese bio-weapon theory soon found itself plastered on the pages of The Washington Times, a right-wing newspaper owned by the family of the late Korean cult leader, Sun Myung Moon, and The Washington Examiner, owned by Philip Anschutz, the billionaire financier of various right-wing causes and groups. Also jumping on the Chinese bio-weapon bandwagon was The Epoch Times, a newspaper owned by the Chinese religious cult, Falun Gong, which opposes the government of China and is believed to have significant links to the U.S. Central Intelligence Agency.

Limbaugh, Cotton, Bannon, and the right-wing newspapers, aided and abetted by Fox News, former Bannon employer Breitbart News, and various conspiracy websites, represent a cognitive dissonance operation designed to disarm public concern about the coronavirus and engineer publicity stunts on behalf of Trump’s presidential campaign and his disastrous foreign policy. Trump wrongly stated that the coronavirus is “under control” in the United States and that it will disappear with warmer weather in the spring.

At a rare news conference in the White House Briefing Room, held on February 26, Trump lied when he stated the United States had only 15 confirmed cases of coronavirus. The true number at the time of Trump’s lie was 59 confirmed cases. Just after Trump claimed the virus was under control, it was announced that a Solano County, California woman was the first detected community-spread case of the virus, meaning it was contracted by a person whose travel history or exposure to an infected person was not a factor in the transmission.

Trump appointed Vice President Mike Pence to head up a White House task force empowered to deal with the effects of the virus. In 2015, while he was governor of Indiana, Pence’s incompetence and ignorance resulted in the worst HIV outbreak in the state’s history. Pence, whose bumbling resulted in a number of HIV deaths in Indiana because he opposed a needle exchange program and due to his slash of state funding for public health agencies, is now responsible for ensuring that all federal government information about the coronavirus is routed through his office before it is disseminated to the public, including through the news media. Based on the dishonesty, ineptness, and ignorance of Trump, Pence, and other Trump administration officials, leaks and whistleblowing from career government public health officials is inevitable.

Trump’s unofficial propaganda minister, Limbaugh, got the disinformation ball rolling by accusing Dr. Nancy Messonnier, director of the Centers for Disease Control and Prevention’s (CDCP) National Center for Immunization and Respiratory Diseases, of being behind a “deep state” conspiracy to weaponize the “common cold” and introduce the coronavirus. Limbaugh alleged that Messonnier was involved with the phantom conspiracy with the intention of preventing Trump’s re-election. Limbaugh cited the fact that Messonnier’s brother is former Deputy Attorney General Rod Rosenstein, who appointed Robert Mueller the department’s special counsel to investigate the 2016 activities of the Trump campaign. During his White House press briefing, Trump said he did not disagree with Limbaugh’s baseless accusation against Messonnier. Trump also decided to throw the Democratic leadership in Congress, in particular Senate Minority Leader Chuck Schumer, into the conspiracy mix.

Trump also felt upstaged by Dr. Anthony Fauci, the 79-year old chief of the National Institute of Allergy and Infectious Diseases (NIAID) at the National Institutes of Health (NIH). Fauci, who has served under every president since Ronald Reagan, countered Trump’s statement that the coronavirus will infect more Americans than the 59 who had tested positive at the time of Fauci’s remarks. Trump had earlier falsely stated that the number of U.S. cases stood at 15. Trump does not like to be countered in public or private, even when he is wrong. The calamity caused by the Trump press conference resulted in Pence – who is a skeptic about science due to his belief in “creationist” fundamentalist dogma – being put in charge of vetting all coronavirus information emanating from CDCP, NIAID, NIH, the Department of Health and Human Services, the Department of Defense, or the U.S. Public Health Service.

Although there is no proof that the Chinese government, as alleged by Cotton and Bannon, was, in any way, responsible for the coronavirus, there is plenty of ample evidence that the U.S. government was involved in the production and transmission of a number of biological and chemical agents during the Cold War and after. This information has never been a concern of political tools like Cotton, Pence, and others of their ilk.

In 1997, a researcher from the State University of Iowa successfully extracted genetic material from the corpse of an obese thirty-something female who died from the Spanish flu in Alaska in 1918. She, along with 85 percent of Brevig Mission (called Teller Mission in 1918) died in a single week. The Spanish Flu pandemic killed at least 50 million people around the world.

Once the genetic material was obtained from the lungs, spleen, liver, and heart of the Inuit woman’s corpse, scientists, in a scene reminiscent of the fictional movie “Jurassic Park” – in which genetic material from extinct dinosaurs is used to bring the creatures back to life – recreated the long-since dead 1918 Spanish flu in a U.S.-government funded laboratory. The woman’s organs were cut into one-inch cubes and shipped to the Armed Forces Institute of Pathology in Rockville, Maryland, and the virus’s genetic RNA material was identified and the 1918 Spanish flu was again thriving after its long disappearance. Other teams of U.S. scientists arrived in Longyearbyen in the remote Norwegian Arctic island of Svalbard to dig up the graves of miners who died from the 1918 Spanish flu.

Perhaps Senator Cotton and Mr. Bannon need not look any further than U.S. government military laboratories in Maryland, including the U.S. Army Medical Research Institute of Infectious Diseases (USAMRIID) in Fort Detrick, Maryland, to discover the real Dr. Frankensteins who play around with dangerous pathogens.

Some of the Spanish flu genetic material was allegedly re-engineered to synthetically create what is now known as the A/H1N1 virus, or as the CDC calls it, the “novel flu.” The A/H1N1 influenza, which contains genetic material from two strains of swine flu, two strains of human flu, and a single strain of avian flu, killed as many as 579,000 people when the pandemic swept the world in 2009.

It is important that in the government’s handling of pandemics how the truth is conveyed to the public and the media. During the outbreak of the 2009 novel virus, the CDC’s National Contact Center provided “a single trusted source of accurate, timely, consistent, and science-based information for the general public, healthcare providers and public health partners.” Under Trump, that is no longer the case with respect to the coronavirus. Pence, who believes the Earth is a mere 6,000 years old and that dinosaurs co-existed with humans, is the final arbiter on what medical information about the coronavirus reaches the public. Pence understands his marching orders. Coronavirus news must all be “good news” and not affect the already-collapsing stock market and U.S. economy. The United States is now governed by a regime extolling superstitions, myths, and magic.