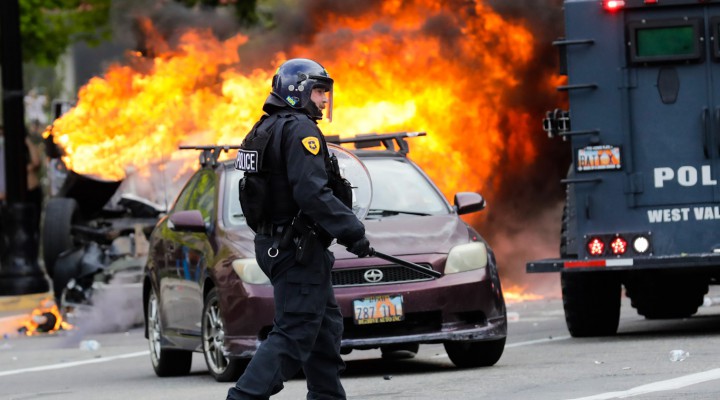 Police all over the world commonly use plants and undercover cops to undermine protests.

MPN– The United States is on fire. Since the police killing of George Floyd on May 26, millions have taken to the streets in protest, clashing with police. At least 11 people have died, and thousands have been arrested. 15 states (plus Washington, D.C.) have called in the National Guard to quash protests raging in over 100 cities. Violence has been widespread, particularly in the epicenter Minneapolis, where Floyd was killed, with buildings engulfed in flames, stores looted and vehicles destroyed.

While protestors are undoubtedly responsible for some share of the destruction, the country’s law enforcement officials have also been caught multiple times sabotaging and destroying property as well, presumably in an attempt to escalate the situation or to defame the protests.

In Seattle, police were caught on camera smashing through the door of a local Target, seemingly far away from any conflict or commotion.

In San Bernardino, CA, protestors claim they held four hours of peaceful demonstrations until the police arrived, at which point the area was engulfed in flames.

we spent close to four hours peacefully protesting and the minute the police showed up, shit starts burning. something’s rotten in the city of san bernardino. https://t.co/SZMGk4CVvL

In Chicago, images show a group of police swarm a car, hitting it with clubs. Eyewitnesses say they were looking for looters but they attacked the wrong vehicle anyway.

Earlier this week there was also the suspicious case of the Minnesota vandal dubbed “Umbrella Man.” Video shows the oddly dressed individual methodically smashing the windows of an Autozone store. Umbrella Man was immediately identified as Jacob Pederson of the Minneapolis Police Department by online sleuths and real-life acquaintances, something the police have denied.

What is beyond doubt, however, is that police all over the world commonly use agent provocateurs to undermine protests. During the 2009 G20 protests in the United Kingdom, authorities used undercover agents to blend into crowds, spying on them. Police also regularly pose as members of the masked anarchist group Black Bloc, attempting to incite riots. At a 2016 anti-austerity demonstration in Montreal, officers were exposed and fled the protest.

While the level to which police themselves are destroying property is debatable, what is not is that they have escalated violence at many protests. In Houston, a mounted police officer trampled a female bystander looking the other way at an otherwise passive protest. In New York, videos of multiple cars driving through and over scores of protesters went viral.

An NYPD officer also attacked a retreating young woman, shouting that she was a “fucking bitch” as he threw her to the ground. She ended up in the hospital with her injuries.

Update: Got her permission with a fuck yeah. The cop pushed her so hard at Barclays & she flung back. She is tiny. Now she’s in the ER after a serious seizure. I’m waiting for updates but have to wait outside because of COVID-19. Please keep my protest sister in your thoughts. pic.twitter.com/MqV0QJ0D8h

The police also appear to be making a point of attacking journalists. Denver police threw a reporter into a burning fire for getting too close to them. Minneapolis cops shot freelance reporter Linda Tirado in the face, leaving her permanently blind in one eye. Minnesota police also shot a Reuters crew on Saturday with rubber bullets, one being hit in the face, the other in the arm, and the back of the neck. Los Angeles Times reporter Molly Hennessey-Fiske also reported that police attacked her and a group of other journalists, firing tear gas at point-blank range at her. A CBS News crew, totally alone in a quiet parking lot was set upon by armed officers firing rubber bullets at them, hitting their sound engineer.

Regardless, it is doubtful whether there will be any legal consequences for the police involved in these situations as law enforcement operates under a culture of immunity from prosecution or even censure. Derek Chauvin – Floyd’s killer – for example, was protected by successive state prosecutors in Minnesota, despite multiple times shooting, and in one case, killing civilians while in uniform. If police can often get away with murder, property damage will likely be no big deal.

Feature photo | A policeman walks in front of a burning vehicle as protesters demonstrate, May 30, 2020, in Salt Lake City. Rick Bowmer | AP

0 thoughts on “Agent Provocateurs: Police at Protests All Over the Country Caught Destroying Property”