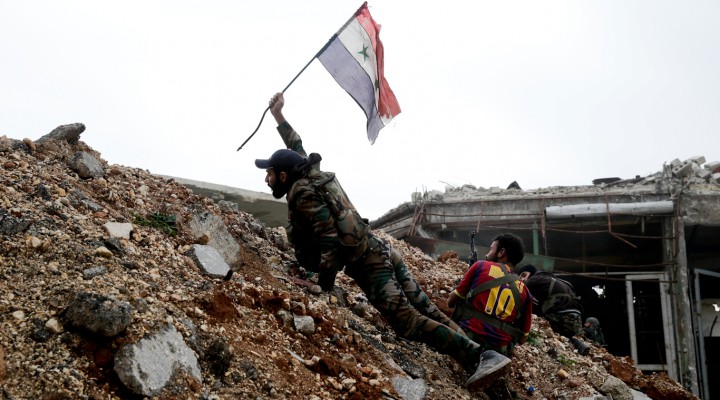 After a decade of bombing, invasions, exoduses and economic strife, it is clear that there are precious few winners in the Syrian Civil War — or from the rest of the Arab Spring, for that matter.

This March marks the 10-year anniversary of the Arab Spring and the protests that rocked Syria, which were a starting point for the ongoing civil war. That conflict has led to over half a million deaths and nearly 13 million people displaced, according to some estimates.

Now, after 10 years of attempts to topple the government of President Bashar al-Assad, it appears that many in the U.S. government and media are quietly conceding defeat.

“We tell Syria’s human stories so that the ‘victors’ don’t write its history,” ran the headline of a CNN article marking the anniversary. Who the victors are is not spelled out explicitly, although it is clear that the reference is to the Syrian government. In explaining the reasons for the violence, the article tells us:

The Assad regime gunned down those who called for a peaceful transition to democracy. Gulf countries sent in suitcases of cash with a wink and a nod towards more religiously conservative fighting units. Assad let former al-Qaeda members and other criminals out of jail. The U.S., at the peak of its involvement, half-heartedly trained some ‘moderate’ rebels, many of whom went on to join the ranks of extremist groups. Thus, Assad is presented as an ally of al-Qaeda, while forces the U.S. and its allies “half-heartedly” supplied and trained register merely as “religiously conservative fighting units” and “moderate rebels,” inverting reality on its head.

The New York Times was less cryptic in its description of the outcome of the conflict, its headline reading “Having Won Syria’s War, al-Assad Is Mired in Economic Woes.” While accepting military defeat in Syria, the U.S. appears to be using its economic power to make sure there can be no clear victory for Assad, enacting waves of sanctions that have crushed the country’s economy, leading to power outages, food shortages, inflation and falling wages.

In its article covering a potential change in Syria policy by the Biden administration, the Minneapolis Star Tribune quoted one former Obama official who said the international take-home message is that “the Syria war is over, Assad has won, Assad will be in power as long as he is breathing oxygen.”

Those in the current administration are more tacit in their acceptance of the situation on the ground. A joint statement from Secretary of State Antony Blinken and his European counterparts last week asked for a nationwide ceasefire, promising that they were not “abandoning” the conflict or Syria’s people, whatever it might look like. The statement also condemned the fast-approaching presidential elections as neither free nor fair, historically a very good indicator that they expect the result to go against their interests. “It’s clear that the regime will leverage the upcoming presidential elections in May to unfairly claim Assad’s legitimacy,” said the United States’ acting deputy ambassador to the UN, Jeffrey DeLaurentis, last week. “The United States will not recognize these elections unless they are free, fair, representative of Syrian society, and supervised by the United Nations,” he added.

The prospect of holding a proper election in a country destroyed by ten years of constant war is indeed very dim. With food prices rising, millions displaced, and millions more having fled abroad, just surviving is a task enough for many. Last month the World Food Program warned that a record 12.4 million Syrians — more than half of the population — are currently food insecure. This is an increase of around 4.5 million from last year. Over the past 12 months, the price of basic foodstuffs has increased by an average of 236%. Some of this is down to U.S. sanctions, with Washington apparently deciding that — as in Venezuela, Cuba and other nations — if the U.S. cannot overthrow the government, it will fall back on starving the country as a punishment.

While the conflict is universally described as a civil war, from the outset it has been dominated by foreign groups. March 15, 2011 saw the Arab Spring spread to Syria, with large demonstrations against Assad’s rule in many major cities. However, this unrest was quickly overtaken by armed groups whose goal was to take the country by force. In July of that year, the Free Syrian Army was established, quickly receiving considerable Western backing. Almost immediately, the country of 21 million people became a proxy war for various regional and world powers, including Turkey, the United States and its European allies, Russia, Iran and Saudi Arabia. At one point, the CIA was spending almost $1 billion per year training and fielding an army of jihadists. Fighters came from as far afield as Libya and Xinjiang province in China to join their ranks.

A US-backed anti-government fighter mans a heavy machine gun next to a US soldier in al Tanf. Hammurabi’s Justice News | AP

The bitter fighting and terrible violence on all sides led to a refugee crisis for a country that had historically been a haven for victims of war in the region. The famously secular nation also became a stronghold for the Islamic State. With the help of Russian forces, ISIS was beaten back, but to this day, a number of foreign powers continue to occupy the country militarily. One of them is the United States, which last month launched a strike on a town on the Syria/Iraq border, dropping 1.75 tons of explosives and reportedly killing 22 people. Between 2014 and 2019, the U.S. and its allies dropped at least 118,000 bombs and missiles on Iraq and Syria. The U.S. also continues to militarily occupy Syria’s oil fields, hamstringing the nation’s efforts to recover economically.

A short spring, a long winter

Unfortunately, Syria is far from the only country that has been left in a much worse state than what it was in ten years ago. In 2011, the Arab Spring sparked hope across the Middle East, capturing the world’s attention for months as, one after another, movements arose challenging the power of undemocratic governments. Yet few, if any, can be said to have succeeded.

Egypt was the centerpiece of the uprising, as hundreds of thousands of people poured into Tahrir Square in Cairo. Dictator Hosni Mubarak was forced to resign and Mohamed Morsi was elected president in a democratic election. Yet barely a year later many were in the streets again, begging the military to overthrow him. The resulting coup brought General Abdel Fattah el-Sisi to power, establishing a dictatorship every bit as brutal as Mubarak’s. Sisi has signalled his intent to remain in power until at least 2034, which, considering his age, is effectively a lifetime appointment.

In Libya, protests against Colonel Muammar Gaddafi’s rule were used as a pretext by NATO for regime change, sparking a bitter civil war, Gaddafi’s assasination, and the rise of Al-Qaeda and other jihadist forces that turned the once-rich country into a failed state, replete with slave markets.

Meanwhile, Yemen is now commonly described as the “world’s worst humanitarian crisis,” where 24 million people need assistance, including 20 million with little or no access to clean water. Yesterday, Oxfam warned that the country is reaching a tipping point, amid a massive spike in COVID-19 cases and a feared outbreak of cholera. The cause for the crisis is clear: the Saudi-led onslaught against the country, which, in turn, has its roots in the constitutional crisis sparked by the Arab Spring protests.

Few remember that the Arab Spring actually started in Western Sahara. But over the past 10 years, the country is being progressively eroded, as Morocco continues to occupy it militarily, building a succession of walls and annexing its most valuable land. As a result, the fortunes of the Sahrawi people are as bad as ever.

The Empire’s Hidden Hand: How The US Established, Sustains and Benefits From Morocco’s Occupation of Western Sahara

After a decade of bombing, invasions, exoduses and economic strife, it is clear that there are precious few winners in the Syrian Civil War — or from the rest of the Arab Spring, for that matter. There are, however, millions of losers. Chief among them are the people of Syria, who have seen their country torn apart as foreign powers, great and minor, wrestle for control of their nation. While the U.S. and its media might be tacitly conceding defeat, few are proclaiming victory.

0 thoughts on “After 10 Years of Civil War in Syria, US (Quietly) Declares Defeat but Won’t Go Home”