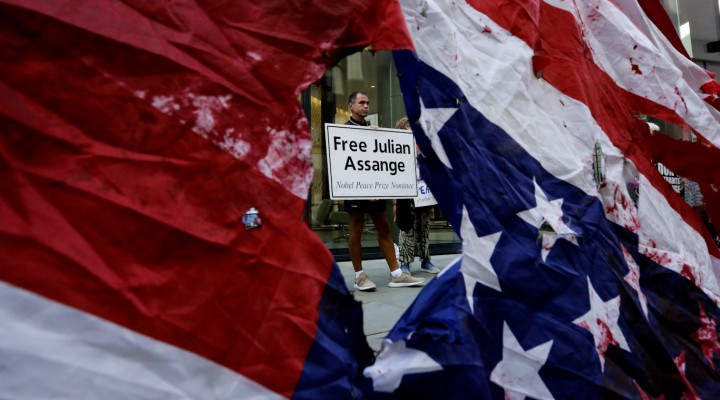 Amnesty International’s Europe Director described the hearings against Assange as an “assault on the right to freedom of expression” that would have a “chilling effect on media freedom.”

MPN– The high profile extradition hearing of publisher and Wikileaks founder Julian Assange continued in Central London today. But it did so without oversight from international human rights groups. Julia Hall, an expert on criminal justice and human rights for Amnesty International, revealed that her organization was again denied entry to the court today, despite their repeated requests to be recognized as fair trial monitors.

Fair trial monitors are a critical component to upholding transparency and regulation in courtrooms across the world, reminding authorities that independent witnesses are scrutinizing them. Hall noted that Amnesty monitors have been recognized as international fair trial monitors for cases in many repressive states, including Bahrain and Turkey, and even oversaw cases at Guantanamo Bay. “It is a disgrace that the UK has failed to recognize that international fair trial monitors should be officially recognized and permitted access to the Assange hearings. Open justice is not served by this failure, it is profoundly undermined,” she wrote.

Amnesty International’s Europe Director, Nils Muižnieks, described the hearing as a “full-scale assault on the right to freedom of expression,” noting that if he were prosecuted, it would have a “chilling effect on media freedom, leading publishers and journalists to self-censor in fear of retaliation.” Hall added that it was not only Assange who was on trial but the fundamental tenets of media freedom. Amnesty also warned that an international smear campaign against him had threatened his right to be presumed innocent until proven guilty. Britain would also be breaking its obligation to international human rights law by transferring the Australian to a known human rights abusing nation, according to the organization.

1/ .@amnesty denied access again today to the court in the #Assange extradition hearing. We've made 3 applications requesting recognition as expert fair trial monitors. Judge states that no "special provision" will be made for our trial monitor's attendance. pic.twitter.com/psQ53H4aKU

Assange is charged with violating the US Espionage Act and 17 counts of publishing secret American government information. If extradited from the United Kingdom, he faces up to 175 years in a supermax prison in Florence, Colorado, described as the only “black site” on U.S. soil. Yet prosecutors today argued that, in reality, he would be unlikely to serve a sentence anything like as long. And while Assange’s father John Shipton said, “the entire indictment would allow for somebody to be arrested for reading” leaked documents, prosecutors argued there was no threat whatsoever to the First Amendment.

Assange’s defense team feels they have been fighting this case with not one, but both hands tied behind their back. They were barred from meeting with their client until the day of the trial, while judge Vanessa Baraitser has made a number of decisions that have led many to question her impartiality. For instance, she rejected 89-year-old defense witness Daniel Ellsberg’s request to speak at a time any later than 6:30 a.m. Earlier this week, she also reportedly threatened to remove Assange from his own trial if he cast doubt upon its legitimacy. “This is not due process. It is due revenge,” wrote veteran journalist John Pilger.

Today in the Old Bailey I watched the grim farce of the US/UK attempt to extradite Julian #Assange. The bullying prosecutor is reduced to insulting the integrity of expert witnesses. Trapped behind glass, Julian is denied free access to his barrister. This is Britain's shame.

The majority of the charges against Assange, an Australian citizen living on the other side of the world at the time of the incidents, criminalize the act of cultivating leaks from sources and receiving classified or stolen documents, something which is the lifeblood of investigative journalism. It is for this reason that longtime activist and political scientist Noam Chomsky remarked that,

Not only is Julian Assange’s fate at risk in this sordid affair, but so is that of journalism, freedom of speech, and democratic rights [more] generally. We can’t stand by and permit this monstrous offense against our highest values to proceed.”

The US government under William Barr is trying to extradite this guy and put him in prison for the rest of his life for the best work that Wikileaks ever did, that has won awards in basically every country, including the United States.”

Snowden was referencing the Iraq and Afghanistan War logs, the 2010 release of hundreds of thousands of military documents exposing U.S. malfeasance in those two countries. Perhaps the most famous leak was the infamous “Collateral Murder” video, which showed footage of American helicopter pilots casually carrying out a massacre of Iraqi civilians in Baghdad in 2007, two of whom were Reuters-employed journalists.

Assange has been wanted since the war logs were published. In 2010, a Swedish prosecutor issued an international arrest warrant for him on sexual assault charges. Fearing it was a pretext for extradition to the United States, he sought and was given refuge in the Ecuadorian Embassy in London by the progressive administration of Rafael Correa. After a change of government in Ecuador, however, he was arrested after seven years inside the building.

Since then, he has been kept in Belmarsh prison in London, where he was often kept in solitary confinement, a practice denounced as torture by human rights groups and international organizations like the United Nations. His treatment was so poor that other high security inmates in the notorious prison staged a protest, leading to somewhat more ethical treatment.

Assange’s father said that it had been a “strong day” for his son in court. But it remains far from clear how the trial will proceed.

Feature photo | A supporter of WikiLeaks founder Julian Assange is seen through a hole torn in a defaced U.S. flag during a protest outside the Central Criminal Court, the Old Bailey, in London, Sept. 14, 2020. Matt Dunham | AP

0 thoughts on ““A Disgrace”: Amnesty International Blocked From Monitoring Trial of Julian Assange”