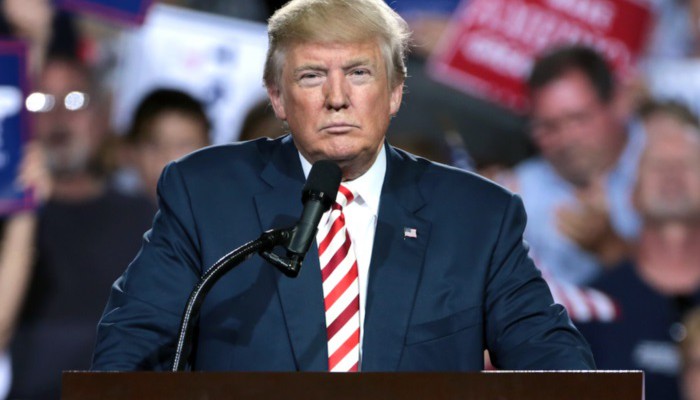 The last two days of Julian Assange’s scandalously opaque and plainly rigged show trial have brought into focus the reality that the WikiLeaks founder’s plight is the exact inverse of what the mainstream partisan narratives assert in the nation that’s working to extradite him.

A new article about the proceedings in The Evening Standard titled “Julian Assange ‘targeted as a political opponent of Trump administration and threatened with the death penalty’” highlights the undeniable fact that this extradition process is only taking place because of a Trump administration agenda which threatens to strike a deadly blow to press freedoms around the world with the precedent it would set.

The Evening Standard reports on the following testimony on Wednesday by Professor Paul Rogers, a lecturer in peace studies at Bradford University:

Assange’s legal team argue that a decision was taken under President Obama not to prosecute the Wikileaks activist, but that move was overturned under Trump.

“During the Obama presidency there was a greater recognition of the problems and less pressure on those presenting conflicting evidence”, said Professor Rogers.

“But since the election of President Trump there has been a vigorous denigration of the Obama era, a return to the outlook of the Bush administration and even more bitter opposition to those perceived as dissenters, especially those involved in communicating unwelcome information such as Mr Assange.”

Julian Assange 'targeted as a political opponent of Trump administration and threatened with the death penalty' https://t.co/9szJ9r0b88

Rogers is absolutely correct. The Intercept’s Glenn Greenwald explained in 2018 that the Obama administration was unable to find an avenue to prosecute Assange for the leaks which began dropping in 2010 without endangering press freedoms, yet the Trump administration worked in concert with London and Quito to drag Assange out of the embassy and slam him with an extradition request (the sole reason for his continued imprisonment) based on the exact same evidence the Obama administration had access to on those exact same leaks.

Greenwald explained in The Washington Post that the Assange indictment was “a blueprint for making journalists into felons”, writing that “the Trump administration is aggressively and explicitly seeking to obliterate the last reliable buffer protecting journalism in the United States from being criminalized, a step that no previous administration, no matter how hostile to journalistic freedom, was willing to take.”

“The argument offered by both the Trump administration and by some members of the self-styled ‘resistance’ to Trump is, ironically, the same: that Assange isn’t a journalist at all and thus deserves no free press protections,” Greenwald wrote.

Indeed, it always blows Assange-hating Democrats’ minds when you point out to them that when they defend this extradition campaign they are in fact defending a Trump administration agenda. Not because it isn’t true, nor even because the proof that it’s true isn’t publicly available information, but because there’s been a massive smear campaign directed at liberal echo chambers to manufacture consent for Assange’s silencing and persecution which has been geared toward painting Assange as a Trump supporter.

Conversely, when you talk to those who espouse the common position of supporting both Donald Trump and Julian Assange, they are unable to wrap their head around the indisputable fact that their president is ultimately responsible for the campaign to extradite Assange and imprison him with a sentence of up to 175 years. They’ll claim falsely that this is an Obama-initiated operation. They’ll claim falsely that Trump, who could have issued Assange a full pardon at any time since he took office, is actually working to get Assange to America so he can pardon him. They’ll claim falsely that Assange, who’s been fighting US extradition tooth and claw for many years, is secretly working with Trump and secretly wants to come to the United States to help him. Again, this is because of establishment propaganda campaigns like QAnon shaping the Assange narrative in a way that benefits the establishment.

The extradition trial has been exposing those partisan positions for the power-serving lies that they are.

Read @kgosztola's report from Day 3 of this month's hearing: https://t.co/MgABJ6HjRD

Trevor Timm, the executive director for the Freedom of the Press Foundation (FPF), told a magistrate court judge, “[President Donald] Trump’s administration is moving to explicitly criminalize national security journalism, and if this prosecution is allowed to go forward, dozens of reporters at the New York Times, Washington Post and elsewhere would also be in danger.”

In Timm’s statement to the court, Timm highlighted how Trump has “attempted to stifle press freedom at all levels.” The U.S. Press Freedom Tracker, which FPF uses to track press freedom violations in the U.S., has tallied over 2,000 examples, where Trump tweeted “negative remarks, insults, or threats to the press” since his presidential campaign in 2016. He has referred to journalists as “enemies of the people.”

The liberal echo chamber has been enthusiastically taking up the banner of “Trump’s war on the press”, but has been pointing its “resistance” to this war at its most inconsequential and downright idiotic aspects rather than at an extradition trial which would set a precedent that could arguably constitute a greater leap toward Orwellian dystopia than the Patriot Act.

“Just embarrassing to have treated this coddled, pompous, self-absorbed windbag who is a threat to nobody like he’s some kind of press freedom martyr, while ignoring what would be by far the most dangerous precedent for press freedom in years if Assange is successfully prosecuted,” Greenwald recently tweeted with a screenshot of a self-aggrandizing book by CNN’s Jim Acosta. “But that perfectly captures Trump-era journalism: hysterically exaggerating deranged conspiracies & sideshows while ignoring real threats unfolding with little attention. Mean tweets about Chuck Todd and Jim Acosta are treated as grave threats to the Republic while this is ignored.”

Even if you're someone 100% on the side of the Trump DOJ in trying to extradite & prosecute Assange, it should be genuinely alarming how few media outlets are covering the very consequential proceedings (to press freedoms) underway in London. Follow @kgosztola for great coverage: https://t.co/TXxayDeJ6C

The theme of Trump’s assault on world press freedoms also featured in the previous day at court. Former UK ambassador Craig Murray wrote the following of the testimony by Professor Mark Feldstein, Chair of Broadcast Journalism at Maryland University, on Tuesday:

[Defense attorney Mark] Summers asked about the Obama administration’s attitude to Wikileaks. Feldstein said that there had been no prosecution after Wikileaks’ major publications in 2010/11. But Obama’s Justice Department had instigated an “aggressive investigation”. However they concluded in 2013 that the First Amendment rendered any prosecution impossible. Justice Department Spokesman Matthew Miller had published that they thought it would be a dangerous precedent that could be used against other journalists and publications.

With the Trump administration everything had changed. Trump had said he wished to “put reporters in jail”. Pompeo when head of the CIA had called Wikileaks a “hostile intelligence agency”. Sessions had declared prosecuting Assange “a priority”.

[Prosecuting attorney James] Lewis said that Feldstein had stated that Obama decided not to prosecute whereas Trump did. But it was clear that the investigation had continued through from the Obama to the Trump administrations. Feldstein replied yes, but the proof of the pudding was that there had been no prosecution under Obama.

This morning we went straight in to the evidence of Clive Stafford Smith, a dual national British/American lawyer licensed to practice in the UK. He had founded Reprieve in https://t.co/jaBYpqVOIt

Maybe it’s a good thing this trial isn’t being televised. The head explosions it would cause among America’s propagandized partisan hacks would destroy the nation.

This all highlights the fact that it is impossible to gain an accurate understanding of what’s going on in the world through partisan perceptual filters. Partisan echo chambers exist solely to distort people’s understanding of events to the advantage of the powerful, whether you’re talking about ensuring the dominance of establishment political factions, the advancement of status quo-preserving wars, or the elimination of voices who punch inconvenient holes in power-serving propaganda narratives.

Whoever controls the narrative controls the world. The source of our world’s problems is the fact that the powerful understand this, while ordinary people do not. Things won’t change until a critical mass of people begin waking up to this fact.