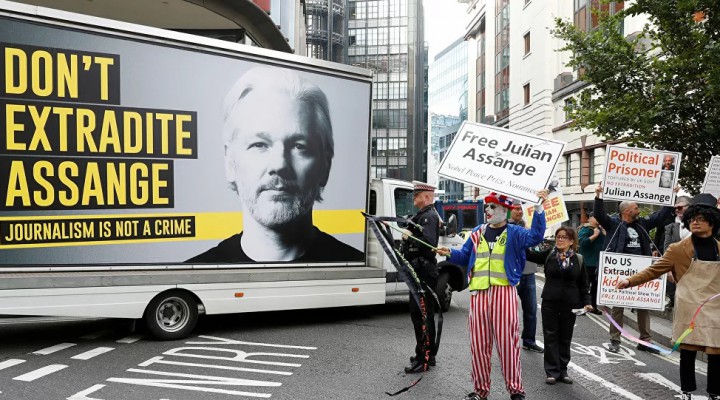 If Donald Trump was genuinely against “endless wars” – as he claims to be – then he would do the decent thing and call off the persecution of Julian Assange.

The extradition trial of the Australian founder of Wikileaks resumed in London this week. In the coming weeks, Assange faces the prospect of being extradited to the US where he will be prosecuted on espionage charges carrying a sentence of 175 years in prison.

The legal proceedings and charges against Assange are a sham. His vindictive detention in solitary confinement at a maximum security prison for over a year amounts to torture. Every day of his incarceration for the past 16 months has been a grotesque abuse of human rights. And this barbarity is all due to the fact that Assange’s whistleblower site Wikileaks exposed monumental war crimes committed by the American and British governments and their militaries.

Julian Assange is a hero to truth-telling and holding tyrannical powers to account. His Wikileaks organization not only exposed illegal wars in Afghanistan and Iraq, but also massive criminal espionage against citizens around the world perpetrated by Washington and its Western allies.

Arguably, Donald Trump benefited greatly from Wikileaks’ blistering exposés of political corruption that tainted the election campaign of Hillary Clinton in 2016. This, by the way, had nothing to do with the bogus so-called Russiagate scandal. Wikileaks exposed Clinton and her Democratic cronies as Wall Street flunkeys using internal sources that had nothing to do with supposed Russian hackers. Those bombshell revelations no doubt served to substantially damage votes for Clinton, thereby benefiting Trump. This is not to suggest Assange was campaigning for Trump. Wikileaks was simply letting citizens know about the corruption swilling around Clinton and the Democrat establishment.

Trump even declared on several occasions that he “loved Wikileaks”. Well, no doubt, he appreciated the beneficial fallout from its exposés.

However, subsequently, it is the Trump administration which has gone after Assange with a vengeance. It was Trump’s Department of Justice that greatly loaded the prosecution case against him when it filed 17 charges under the archaic World War One-era Espionage Act. Instead of a facing relatively minor charges of computer hacking with five-year imprisonment (still unjustified, mind you), Assange is being hounded by the Trump administration with the threat of 175 years in prison. A de facto death sentence.

In other words, the Trump administration has ensured the trashing of any due process and Assange’s legal rights in order to pursue his destruction. And of course the British vassal state has dutifully obliged the American tyranny against this innocent and imminently honorable man.

This is important proof of Trump’s charlatan character. This week the American president sought to pose as being against endless wars and of being on the side of ordinary troops. Having been accused of disparaging American war dead as “losers and suckers”, Trump no doubt felt under pressure to appear as the champion of the troops.

In doing so, Trump took aim at the military top brass at the Pentagon and the military-industrial complex.

“I’m not saying the military’s in love with me — the soldiers are,” said Trump during his Labor Day address on Monday. “The top people in the Pentagon probably aren’t, because they want to do nothing but fight wars so that all of those wonderful companies that make the bombs and make the planes and make everything else stay happy.”

Trump is reprising his populist 2016 election promises of “ending endless wars” in the interest of protecting soldiers’ lives.

That posturing doesn’t sit well with the fact that Trump has done nothing to stop American militarism around the world since be took office nearly four years ago. As for the Pentagon war machine, this president has greatly expanded the taxpayer-funded bloat of the military-industrial complex.

But perhaps the most telling test is the fate of Julian Assange. He exposed criminal US endless wars more than anyone. If there were any justice, Assange should be freed and feted as a hero serving the good of the public and the cause for peace. Trump’s callous persecution of Assange shows that his rhetoric about ending wars is empty, cynical posturing.

0 thoughts on “Assange and Charlatan Trump”