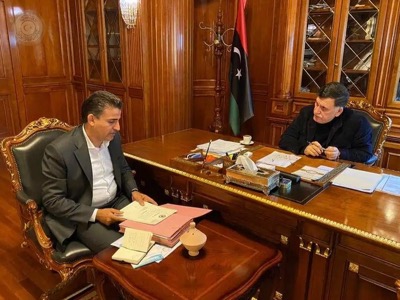 The arrival of new weapons and fighters in Libya heralds a new war against the population. In reality, the situation has never calmed down since the attack by NATO in accordance with the Rumsfelf/Cebrowski strategy of endless war. By taking a further step, the protagonists will not solve anything, but will extend the conflict zone.

All agree that the current dramatic situation in Libya and the Sahel is the consequence of NATO’s illegal intervention in 2011. Yet few have studied this period and tried to understand how it came about. If we do not think about it, we are heading for another disaster.

It is important to keep in mind a number of facts that we persist in forgetting:

The Libyan Arab Jamahiriya, created by a particularly bloodless coup d’état, was not a seizure of power by a neurotic dictator, but a work of national liberation from British imperialism. It was also the expression of a desire for modernization that was reflected in the abolition of slavery and an attempt to reconcile the Arab and black populations of Africa.

Libyan society was organized in tribes. It is therefore impossible to establish democracy there. Muamar Gaddafi had organized the Libyan Arab Jamahariya on the model of the living communities imagined by the French utopian socialists of the 19th century. This amounted to creating a local democratic life, but abandoning this ideal at the national level. Moreover, the Jamahiriya had died because it did not have a policy of alliances and was therefore unable to defend itself.

The Coalition that attacked Libya was led by the United States, which concealed its true objective from its allies throughout the conflict and placed them before the fait accompli (leading from behind). After having claimed for months that there was no question of NATO intervening, it was this structure that commanded the operations. Washington has never tried to protect civilians or to install a government under its jackboot, but on the contrary to install rivals and to prevent peace by all means (Rumsfeld/Cebrowski doctrine).

There has never been a popular revolution against the Jamahiriya, but the intervention of Al Qaeda on the ground, the awakening of the division between Cyrenaica and Tripolitania and the coordinated intervention by NATO (the Allies in the air, the Misrata tribe and the Qatari Special Forces on the ground).

From then on, the rivalry between the government of Tripoli and that of Benghazi referred to the division of the country before 1951 into two separate states, Tripolitania and Cyrenaica, and then to the awakening of this division during the NATO aggression. Contrary to the spontaneous reaction, today, in order to restore peace, it is not a question of supporting one camp against another, but on the contrary of uniting the two camps against the enemies of the country. 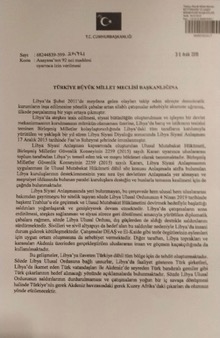 Resolution of the Turkish Grand National Assembly authorising the deployment of troops in Libya.

The principle of a Turkish military intervention was adopted by the Turkish Grand National Assembly in Ankara on January 2, 2020. It can be interpreted in three cumulative ways:

Turkey supports the Muslim Brotherhood in power in Tripoli. This explains the support of Qatar (favourable to the Brotherhood) to the same government and the opposition of Egypt, the Emirates and Saudi Arabia.

Turkey is developing its regional ambitions by relying on the descendants of the former Ottoman soldiers of Misrata. It therefore supported the government of Tripoli after the Misrata tribe took over the capital in 2011.

Turkey uses the jihadists it can no longer protect in Idleb (Syria). That is why it is transferring them to Tripolitania and will attack Benghazi.

The Turkish intervention is legal under international law and is based on the request of the Tripoli government legalized by the Skhirat Agreement (Morocco) on December 17, 2015 and Resolution 2259 of December 23, 2015. On the contrary, all other foreign interventions are illegal. This despite the fact that the Tripoli government is composed of the Muslim Brotherhood, Al-Qaeda and Daesh. We are therefore witnessing a reversal of roles, with the progressives now in the East of the country and the fanatics in the West.

For the moment, there are only a few Turkish soldiers on the government side in Tripoli, but Egyptian, Emirati, French and Russian soldiers on the Benghazi side. The announcement of the official dispatch of a few more Turkish soldiers will not change this balance much, but the transfer of jihadists may involve hundreds of thousands of fighters. It may turn the chessboard upside down.

It should be remembered that, contrary to the western narrative, it was Libyan al-Qaeda fighters, not Syrian deserters, who created the Free Syrian Army at the beginning of the war against Syria. The return journey of these fighters is predictable.

Only the Turkmen Syrian militias and the Levant Legion (Faylaq al-Sham) have moved, some 5,000 fighters. If this migration continues via Tunisia, it could last several years until the total liberation of the governorate of Idleb. This would be excellent news for Syria, but a disaster for Libya in particular and the Sahel in general.

The situation in Libya would be the same as in Syria: jihadists supported by Turkey, facing local populations supported by Russia; the two powers would carefully avoid direct confrontation as long as Turkey is a member of NATO.

By settling in Tripoli, Turkey now controls the second flow of migrants to the European Union. It will therefore be able to reinforce the blackmail it exerts on Brussels with its own flow from Turkey.

In the absence of physical borders, the jihadist armies will not fail to spill over into the desert from Libya into the entire Sahel. They will make the G5-Sahel countries (Mauritania, Mali, Burkina Faso, Niger and Chad) even more dependent on French anti-terrorist forces and AFRICOM. They will threaten Algeria, but not Tunisia, which is already in the hands of the Muslim Brotherhood and manages the transit of jihadists in Djerba.

The Sunni population of the Sahel will then be purified and the Sahelian Christians will be expelled as were the Christians of the East.

There will come a time when the jihadist armies will cross the Mediterranean, the Italian islands (notably Lampedusa) and Malta being about 500 nautical miles away. The US 6th Fleet will intervene immediately to repel them under the North Atlantic and Maastricht Treaties, but chaos will inevitably spread to Western Europe. The Europeans who overthrew the Libyan Arab Jamahiriya will then only be left with their eyes to cry.

0 thoughts on “Preparing for a new war”